In April 2009, His Eminence Avikrita Rinpoche, son of H.E. Zaya Vajra Rinpoche, the fourth son of H.H. Jigdal Dagchen Sakya, visited Seattle for the first time since 2002. Avikrita Rinpoche, born in 1993, has been living in India since the age of four. He began his formal studies at the age of six while residing with his maternal grandparents. At the age of nine he moved to the Sakya Center at Dehradun, and one year later to the Sakya Phodrang in Delhi. He has since alternated his time between the Sakya Phodrang (Sakya Heritage Foundation) and the Sakya Ghoom Monastery in Darjeeling. He has been receiving the complete traditional training of his lineage under the guidance of H.H. Sakya Trizin and his holy grandfather H.H. Jigdal Dagchen Sakya, who, along with other high lamas of the Sakya tradition, have conferred innumerable empowerments, transmissions and teachings upon him.

Prior to the Seattle visit, Avikrita Rinpoche had just finished his Vajrakilaya exams which entailed leading the grand Vajrakilaya Ceremony. This sacred ritual is an ancient practice upheld by the Khon dynasty and the only grand ceremony of its kind in the Tibetan tradition to remain unbroken for over 1300 years. It is rigorously complex to learn and takes over two weeks to conduct. The ceremony was presided over by H.H. Sakya Trizin and his Eminent Sons. At the ceremony, Avikrita Rinpoche chose the most demanding of the different sections to read, thus qualifying him as a proficient practitioner of Sakya rituals. Avikrita Rinpoche astonished all in attendance with his flawless performance.

The Seattle visit was mainly a vacation and a break after the exams. It was also an opportunity to spend time with his grandfather, H.H. Dagchen Rinpoche and receive teachings from him. H.E.  Avikrita Rinpoche was accompanied by his younger brother, H.E. Abaya Rinpoche who has been studying in India over the last year.

Both Avikrita Rinpoche and Abhaya Rinpoche visited the Sakya Monastery in Seattle every day at 9:30 am for the entire six week visit. While Avikrita Rinpoche studied Tibetan grammar with Tulku Yeshe, Abhaya Rinpoche studied Tibetan on his own. They spent time with H.H. Dagchen Rinpoche and received oral transmissions and teachings. Besides taking full opportunity in visiting all of Seattle’s famous and fun sites, the Dhungseys spent a lot of their time with family members and especially with their cousins during the weekends. Avikrita Rinpoche’s 16th birthday, hosted by his parents, was celebrated with family and friends at the Monastery.

H.E. Avikrita Rinpoche’s requested that a special Mahakali puja be performed with H.H. Dagchen Rinpoche at the Monastery. The three hour long puja was held on May 8th, 2009. It was lead by H.E. Avikrita Rinpoche himself and attended by Rinpoche’s Great Aunts Jetsun Tsegchen la and Jetsun Chimey la, Dagmo la, Mangtho la, resident monks and members. 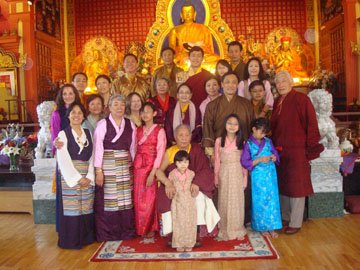 One highlight of His Eminence’s visit was the bestowal of a Long Life Initiation on May 24th, 2009. The initiation was requested by H.H. Dagchen Rinpoche and Monastery members. It has been a tradition in Khon Lineage that the first initiation bestowed by a Khon lama be a Long Life Initiation and that it is bestowed to his Khon family members. Avikrita Rinpoche gave this particular initiation (Amitabha, Amitayus, Hayagriva, Padmasambhava) after having received it himself from many lamas such as H.H. Dagchen Rinpoche, H.H. Sakya Trizin, and Venerable Luding Khyen Rinpoche.  Avikrita Rinpoche remarked, “It was truly an honor for me to bestow my first initiation to Popo Dagchen Rinpoche at our very own Monastery.”

Son of the Khon Lineage, immaculate divine race from the realm of Clear Light. The Three Races embodied in the Sakya master of expression;
Take hold of existence with the white lotus of your altruistic intention
To spread the supreme Mahayana tradition of Sachen Kunga Nyingpo.

You whose transcendental activities are the spontaneous fulfillment of the qualities of relinquishment and realization;
Avikrita Vajra, please live long in Dharma.

By the blessings and power of the Gurus, Yidams, Dharma Protectors, and the host of Deities,
May you become the glory of the Buddha’s dispensation.