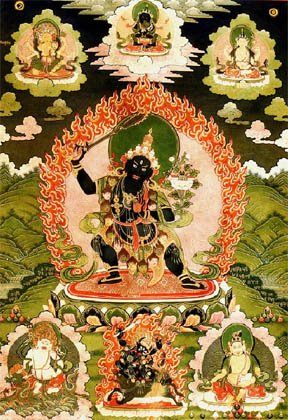 Black Manjushri is one of many emanations of Manjushri, the Buddha of Wisdom.  In this form, Manjushri is a wrathful healing deity.  This practice is aimed at healing mental and physical suffering; it is particularly useful for counteracting virulent disease, malevolent forces, and forms of disharmony in our environment.

His Holiness Jigdal Dagchen Sakya, Head Lama of  Sakya Monastery,  was born in Tibet in 1929.  He continues the great Sakya lineage which began with Khon Konchok Gyalpo (1034—1102).  He received teachings of the unbroken Khon lineage, the Sakya Vajrakilaya, the Hevajra and the complete Lamdre Tsogshe, from his father, H.H. Trichen Ngawang Thutop Wangchuk, the last Sakya throne holder in Tibet. He also studied with many other great Buddhist teachers, including Dzongsar Khyentse Chökyi and Dingo Khyentse Robsal Dawa.

Translator, Upasaka Jeffrey Schoening, PhD in Buddhist Studies, is a longtime member and interpreter at Sakya Monastery of Tibetan Buddhism.  Jeff is the author of The Shalistamba Sutra and Its Indian Commentaries (Vienna 1995), a two-volume study on teachings about dependent arising.  He currently works as a health care chaplain and as a private practice spiritual director.