His Eminence has received many initiations and oral transmissions from H.H. Dagchen Rinpoche, H.H. Sakya Trizin and many other high Lamas of the Sakya sect. Ever since he started his traditional education, H.E. Dhungsey Abhaya Rinpoche has shown keen interest in the Khon lineage of monastic ordination originating with the Great Sakya Pandita, Chogyal Phagpa and Lama Dhampa Sonam Gyaltsen.  His Eminence realizes the importance of continuing such a lineage of ordination. He has no memories of his Great Uncle, H.H. the late Thrinley Rinpoche, as he was only a year old when he passed away, but has been inspired by this great ordained member of the Khon lineage. 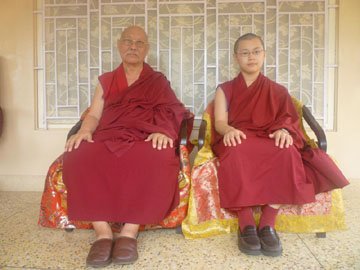 On July 25th, the day commemorating the First Turning Wheel of Dharma (Cho-Khor Duchen), with the consent and blessing of H.H. Dagchen Rinpoche, it was decided that it would be an auspicious day for the ordination of H.E. Dhungsey Abhaya Rinpoche.  It seemed most auspicious to receive ordination from His Eminence Luding Khenchen Rinpoche, the senior-most of the ordained Sakya Lamas.  The private ceremony took place in Manduwala, seat of the Ngor-pa sub-school of the Sakya sect in India.  The Luding Ladrang is where His Eminence Luding Khenchen Rinpoche and H.E. Luding Khenpo Kushon reside.  H.E. Gyalyum Chenmo and representatives of the Sakya Centre, Rajpur, the different Ngor ladrangs and  others in the area came to pay respect and acknowledge the auspicious occasion .

The Ceremony itself consisted of the Preceptor, His Eminence Luding Khenchen Rinpoche, and ten other fully ordained Lamas and monks amongst whom were H.E. Luding Khenpo Kushon, H.E. Khangsar Shabdrung, Atro Tulku, Gyudra Khenpo Kunchok Gyaltsen and other monks.  Prior to the ordination the head is shaved, leaving just a tuft in the middle of the crown that is later cut during the ceremony.  No lay person is allowed in. Ordination vows are explained and taken, robes blessed and the final refuge consists of taking up the name, dress, signs and ways of thinking of an ordained monk.

H.E. Dhungsey Abhaya Rinpoche’s education will remain unchanged. He will continue to study alongside his brother H.E. Dhungsey Avikrita Rinpoche. Besides the differences in the physical appearance and the addition of many ordination vows, there are a few additional rituals that an ordained Rabjung Dhungsey will attend (such as the annual yarney and the bi-monthly sojong) that are not required of the white-robed Ngachang Lamas.  All the rest of the rituals and prayers are the same.

His Eminence is currently in Sakya Guru Monastery in Ghoom, Darjeeling, with his brother continuing his studies. They return to the Sakya Heritage Society in New Delhi in September.