On Thursday, October 1st, 2009, Sakya Monastery welcomed its new abbot, Venerable Khenpo Jampa Tenphel to Seattle. Our members and friends welcomed him on the following Saturday by offering katags and having a welcome potluck. Khenpo Jampa comes to us from Dzongsar Institute in India, where he was the library director as well as a tutor for many years. He was ordained as a novice monk at the age of five and in 1988 he received Gelong vows (full ordination vows) from H.E. Luding Khen Rinpoche. From Dzongsar Institute he has received the following degrees: Madhyama Diploma, which is equivalent to a high school diploma, was received in 1997, Degree of Shastri, which is equivalent to B.A. in Buddhist Philosophy, was received in 2000, and the postgraduate degree of Acharya, which is equivalent to Master of Arts in Buddhist philosophy, was received in 2002. He was appointed as Abbot (‘Khenpo’) of the Dzongsar Institute on November 20, 2004. Khenpo Jampa has extensive knowledge in Buddhist philosophy and particularly in the Sakya teachings. We are very pleased to welcome him to our Sangha! 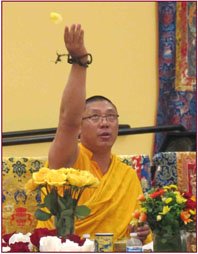 Khenpo Jampa will be teaching intermediate/advanced level curriculum on Buddhist philosophy at Sakya Monastery. He has been specifically requested by H.H. Dagchen Rinpoche to teach the 18 classical Sakya texts. He will also be the librarian for our growing collection of Tibetan Buddhist scriptures. Please join us in welcoming Khenpo Jampa as our abbot and teacher!