Adrienne Chan is the personal assistant to H.H. Dagchen Rinpoche and Executive Director of Sakya Monastery.

After a 13 hour plane ride, HH Jigdal Dagchen Sakya, HE Dagmo Kusho, Lama Migmar and I touched down at Taipei, Taiwan airport at about 5:30 am. Although we were exhausted, the arrival was beautiful and heart warming—colors of golden silk, maroon robes, flowing white katags and flowers engulfed us. Dagchen Rinpoche was immediately sheltered by a traditional golden parasol three feet in diameter (reserved for high lamas).  Lama Tashi of Sakya Tsechen Thupten Dekyi Choling, led the welcome party.  Tulkus, lamas, nuns and students of all sects of Buddhism offered katags to Dagchen Rinpoche and Dagmo Kusho. At one point, Dagchen Rinpoche was interviewed by a news reporter.

Once the luggage arrived, students picked up our bags and we were whisked off to Tai Chung, Taiwan, where Dagchen Rinpoche was invited to teach at four Centers. He consecrated Pewa Tulku’s new center and gave a teaching on “Parting from the Four Attachments”.  He also gave a teaching on Chenrezi at a Chinese Temple as well as teachings at the Kagyu center led by HE Chime Rinpoche.  The bulk of Dagchen Rinpoche’s Tai Chung teachings were at the Nyingma Kathog Rigzin Chenpo Dharma Association Monastery, which is directed by HE Kathog Rinpoche.

The Tai Chung teachings began auspiciously on October 20, 2009 at Kathog Rinpoche’s monastery with HE Dagmo Kusho bestowing the Green Tara initiation to many devoted students. Because students worked during the week, it was arranged that Dagchen Rinpoche would bestow the esoteric Dharma teaching to the ordained in the morning and in the evening he would give teachings to all students.  Thus, Dagchen Rinpoche started a week and a half of morning initiations for monks which included initiations/teachings like Kurukulle, Hevajra, and Mahakala.  To all students he bestowed initiations like Red Tara, Hayagriva and Red Zambala. 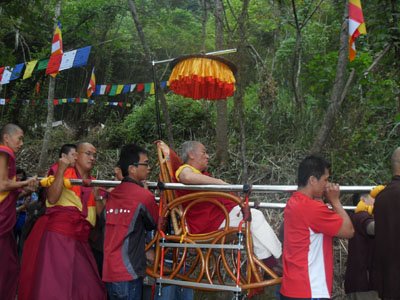 Once they reached the retreat site a beautiful ground breaking ceremony began. A delicious assortment of food offerings were made to the local deities, prayers were chanted, gyaling horns and drums played.  The ceremony concluded with Dagchen Rinpoche breaking the ground (digging) in a location designated by placement of Padmasambhava’s brass iron staff.

Our final day at Kathog Rinpoche’s monastery was an all day event.  Dagchen Rinpoche wearing a very precious and elaborate Padmasambhava hat, led a Jetsun Nynigdik Wang Druk puja/tsok and initiation.  At the tsok, 12 special people, which included our beloved Dagmo Kusho, were chosen to represent “dakinis”.  Each dakini wore colorful brocade garments and crowns. Then they were assigned to chant offering prayers.  At the conclusion of the prayers, tsok (food) items piled at least three feet high were distributed to everyone.  Our visit at Kathog Rinpoche’s monastery was magnificent and memorable.  We left with visions of dakinis dancing in our heads.

Could anything top that?  No, but could something equal that?  The next day Dagchen Rinpoche and Dagmo Kusho received a grand welcome from HE Chime Rinpoche and his students. The welcome ceremony began with loud explosions of fire crackers and Dragon and Lion Dances.  Two golden lions, six feet long with snapping mouths and adorable wagging tails danced about greeting Dagchen Rinpoche and Dagmo Kusho.  One lion acrobatically danced and skipped on the top of a row of eight poles which were about 12 feet high off the ground.  It was incredible—it was like watching a circus act—a little scary but fun.

After the welcome, Dagchen Rinpoche led Chime Rinpoche, other lamas and monks, including our Lama Migmar, in prayers for the site consecration of Chime Rinpoche’s new retreat center.  The prayer ceremony also included a huge fire puja offering, releasing of 100 birds (assisted by Dagmo Kusho) and tree planting ritual performed by both Dagchen Rinpoche and Dagmo Kusho.

For the next four days, Dagchen Rinpoche bestowed to Chime Rinpoche, his students and other Buddhist practitioners the three wealth deities initiations (The Three Red Ones: Kurukulle, Kamarja, Ganapati), which are from the renown “Sakya Thirteen Golden Dharmas” teachings.  He also bestowed a Medicine Buddha empowerment and led Long Life, Guru Yoga and Medicine Buddha pujas.  Additionally, Dagmo Kusho gave a public talk to eager students on the evening of the third day. On our last day in Tai Chung, November 1, 2009, Chime Rinpoche surprised us all.  He presented Dagchen Rinpoche with a mandala offering followed by gifts and an eight layered birthday cake. The birthday cake was a least five feet high (it looked like a wedding cake).  To be able to celebrate one’s lama’s long life and for the continuation of his teachings is indeed thrilling!  We were able to accomplish that four more times—in Taipei, New Delhi, Lumbini and recently in Seattle!  “Ku Tse Ring” (long life) to our beloved Dagchen Rinpoche! 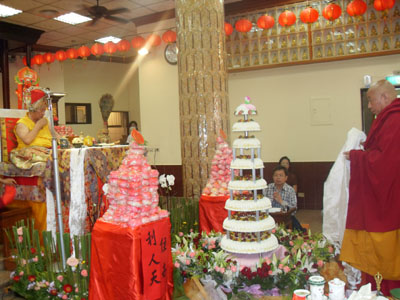 Next on November 2nd, we arrived at Sakya Tsechen Thupten Dekyi Choling located in Taipei, capitol of Taiwan.  Since November 2nd is Dagchen Rinpoche’s actual passport birthday, Lama Tashi requested that Dagchen Rinpoche lead the lamas, monks and students in a Mahakala puja, which was followed by a mandala offering, more gifts and a delicious birthday cake.  Our reception in Taipei was “regal” and that is no understatement.  Dagchen Rinpoche and Dagmo Kusho were given the “Presidential Suite” in the Hyatt Grand Hotel.  The suite had an audience room with an emperor like throne/chair and six other rooms which included a kitchenette and piano room.

In Taipei, Dagchen Rinpoche’s schedule was quite busy.  He taught at four Sakya Centers.  At those centers he gave Hayagriva, Yamataka and Vajrakilaya initiations.  Additionally, under Lama Tashi’s guidance Sakya Tsechen Thupten Dekyi Choling requested that Dagchen Rinpoche bestow to 400 students the major mandala empowerment, Vajrayogini. Those students also received from him the six armed White Mahakala empowerment and from Dagmo Kusho the White Tara initiation. 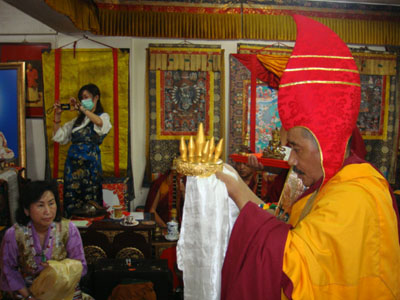 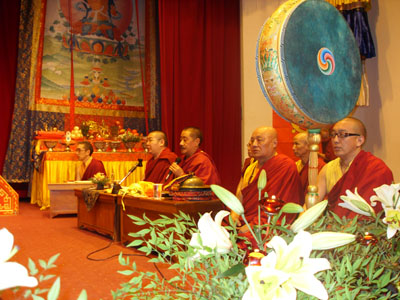 While in Taipei, Dagchen Rinpoche made a presentation at a conference sponsored by the International Tibetan Buddhism Study Institute.  Leaders of the conference were Kathog Rinpoche, Tulku Thupten Norbu, Khenpo Tsultrim Namdag and Geshe Cho Nyi Dontog.
Including the Honorable Dawa Tsering representative from His Holiness the Dalai Lama’s government in Taiwan, four hundred other Buddhist leaders attended the conference.

Our visit to Taipei was incredible. Taipei is a thriving modern metropolis—taxis are every where. Exquisitely designed high rises dot the cityscape. Designer shops abound.  And Taipei even has three Costco stores!

In Taiwan, Dagchen Rinpoche and entourage were treated to numerous 8-10 course banquet meals.  Most often the meals took 2-3 hours to complete. At one banquet, we heard a familiar tune which I suddenly recognized was our own “Magical Chants” CD produced by Chuck Pettis.  It was beautiful to hear Dagchen Rinpoche and Celia’s chants played in a Buddhist restaurant in far away Asia.

Dagchen Rinpoche’s next destination was Hong Kong.  As Lama Migmar described, Hong Kong is an island of tall and thin high rise apartments with tall and thin double-decker buses slithering between buildings.  To me, I saw Hong Kong as rows of compact high rise bee hives.  It is a dense place but the Buddhist students are very devoted to their Lamas and the Dharma.  That first evening in Hong Kong was emotional and heart warming.  Waiting patiently to greet Dagchen Rinpoche and Dagmo Kusho were about ten young people from Gaba, Kham, Dagmo Kusho and Migmar’s home town.  One of the visitors was named Pechen. She is the daughter of Tulku Sepa, a high Sakya lama in Kham.  She and her fellow Khampas wore traditional eastern Tibetan garments.  They respectfully prostrated before Dagchen Rinpoche and then humbly on their knees belted out in Tibetan, beautiful guru devotional songs.  It was as if we were in Tibet!  At the end, one singer could not stop crying—it was overwhelming!

The next day, Dhungsey Avikrita Rinpoche (grandson of HH JD Sakya) and Yangsi Lama Kan Tso and their teachers, Gen Tashi Nyima and Gen Kunsang joined our entourage.  Together with Dagchen Rinpoche they participated in the consecrations and Grand Openings of two centers.  The first was the consecration of Dagchen Rinpoche’s new Hong Kong Center, Sakya Tsechen Phunstog Choling.  After that blessing ritual, Dagchen Rinpoche bestowed to the students the Padmasambhava initiation, which was followed by a tsok. 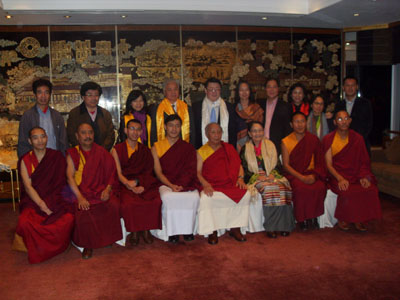 Both consecration ceremonies were colorful and full of rich tradition, prayers and ritual music. Overflowing crowds attended both events.

After Hong Kong, we boarded India’s 21st century Jet Airways airline to New Delhi. Dagchen Rinpoche’s first class seat resembled an egg or pod.  It was amazing, when one lays back to sleep, one is cradled comfortably like being in a cocoon. Can you imagine emerging from a night’s sleep to the sights and sounds and smells of ancient India? To be continued…