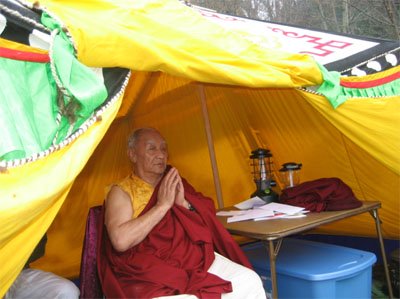 The Vajrapani Fire Puja, presided over by His Holiness Jigdal Dagchen Sakya Rinpoche, was held on February 7th, 2010 at the Tara Retreat Center on Whidbey Island.  The Puja was requested by Tenzin and Katie Denison.

This traditional Fire Puja is beneficial on many levels; for fulfilling wishes, removing obstacles, improving health and increasing merit and wealth.  The blessings of the Puja can also stabilize one’s meditative concentration and improve one’s spiritual practice.  The smoke from the fire itself is charged with vibrations that travel for miles creating peace and harmony in the world.

For the deceased it is a wonderful way to purify negative karma and attain higher rebirth.  Participants were asked to bring either a photo or the written name of the deceased.  Those who were unable to attend were still able to participate by giving offerings and names and photos of deceased loved ones to the Monastery before the event.

The morning of the Fire Puja, the Sakya Monastery Monks, Tulku Yeshi, Khenpo Jampa, and Lama Migmar began preparations for Dagchen Rinpoche’s arrival.  The sand mandala was constructed, which serves as the foundation for the fire, as well as a space for the Fire Deities to reside during the Puja.   A beautiful traditional Tibetan tent was set up for Dagchen Rinpoche.  Due to the misty rain coming down, some not so traditional tarps were set up for participants.

As Dagchen Rinpoche, now emanating as Heruka and wearing the Heruka crown, began the Fire Puja prayers, the space we occupied began to change.  As we continued to make offerings to the fire deities the area became charged with energy from the power of Rinpoche’s prayers.

Auspicious signs abounded.  Within the flames, many saw Dagchen Rinpoche’s face appear, others saw Vajrapani waving his arms.   Time seemed to stand still suspended in this circle, and a deep connection between the participants was created there.

The offerings of dried fruits, honey, barley, rice, oil, kusha grass, black and white sesame seeds, noodles, fresh and dried flowers, continued until there were no more to offer.  With prayers continuing, the names and photos of the deceased were placed into the fire.

This was a very personal moment, and a very transformative and reflective moment for all those participating.  Even for those who were not able to attend in person, they were also able to experience the transformative effects of this Fire Puja.

On behalf of Monastery friends and members who attended the Puja, we are immensely grateful to His Holiness Dagchen Rinpoche for this great and wonderful gift and for his infinite kindness and blessings. We would also like to thank Dhungsey Sadu Rinpoche, Her Eminence Dagmo Kusho, Tulku Yeshi, Khenpo Jampa, Lama Migmar and Lama Lodro, Adrienne Chan, Chuck Pettis and all who assisted and participated in any way. 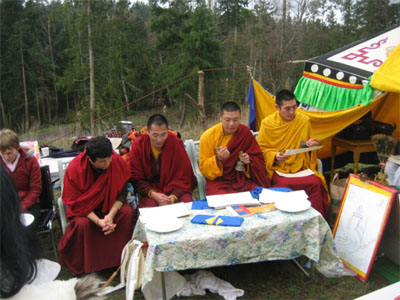 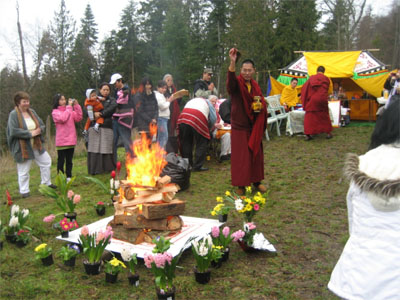 Here are comments from some of the participants:

“I was so happy to learn of the blessings for those whose names go into the fire. I brought a small blizzard of pieces of paper.” – Marianne Kenady

“…..Burning up obstacles, negativity for ourselves, other people and the planet with a loving group of people, what is more powerful!! I would love to see Fire Pujas take place more often. It was very wonderful to have shared this experience with everyone there. May the effects of the Puja go deep and wide…” – Sara Storm

“Powerful”, “Intense,” “Afterwards I went to the PCC and the children that were there responded to me by smiling and laughing even though I did not know them.” – Gail Fredrickson

“It was interesting, I noticed that during the Fire Puja and while in Dagchen Rinpoche’s presence, I had all sorts of energy, but afterwards I felt like I had worked really hard all day, the kind of spring cleaning we do at this time of year.  Since the Puja, I have just felt lighter and things seem easier to do than normal.
I would also like to really thank Chuck for sharing his land with the Monastery and Heidi for her help.  What a wonderful thing.  I had a very enjoyable time at the Fire Puja.  It was so good to see everybody there!  The element fire has to do with love and communication, and I sure felt lots of that there! .” – Jean Freeman 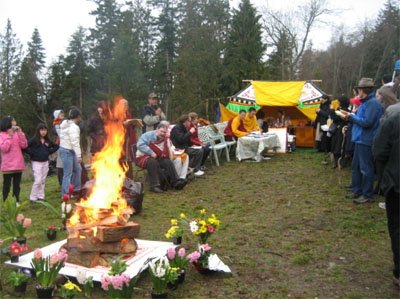 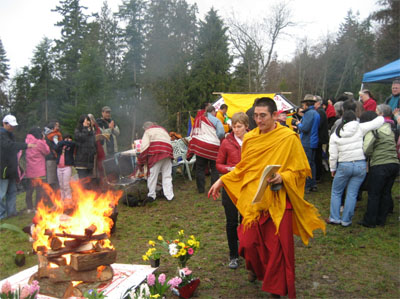