My First Trip to Dzongsar Institute 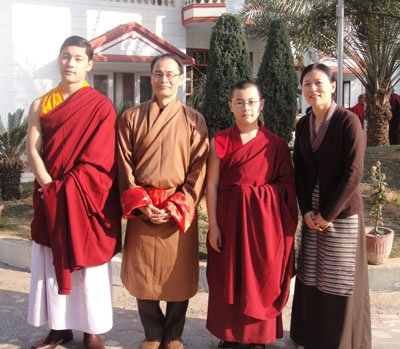 On the 26th of February 2010 at 7:00 am, Their Eminences Dhungsey Avikrita Rinpoche, Dhungsey Abhaya Rinpoche, Jetsun Chime-la, Dagmo Kusho, Dagmo Lhanze, Mangtho-la,Yangsik, his students Edward Wong and Mrs. Lam from Hong Kong, and teachers, attendants and myself departed from the New Delhi Phodrang in a four car caravan. Our destination was Dzongsar Institute, where H.E. Dhungsey Avikrita Rinpoche will be studying under the instruction of H.E. Dzongsar Khyentse Rinpoche, Khenpo Jamyang Losal, Khenpo Choying Dorjee  and all of the Dzongsar Khenpos.  Dagmo Kusho made a special trip to be able to represent H.H. Dagchen Rinpoche and the Sakya family in seeing Avikrita Rinpoche, her grandson, off to college for higher Buddhist studies. Jetsun Chime-la, my Aunt, and Mangtho-la also came all the way from Seattle to attend Avikrita Rinpoche’s welcome at Dzongsar. Our caravan drove along mostly safe roads for about nine hours staying one night at the Suvhida Palace Hotel in Una where we were recieved by Dzongsar College Khenpo Sonam and Lama Wangchug.

On 02/27/2010 at 6:00 am, we left for Dzongsar Chokyi Lodro’s College, driving for about four hours, occasionally having beautiful snow capped Himalayan mountains reveal themselves as we entered the richest state in India – the Punjab. Known for its colorful head garb, immense land and harvested crops that feed temples. We were fortunate to have scenic peaks at the everyday lifestyles of the locals who often gazed at our vehicle caravan in awe. We encountered what seemed to be a zoo parade with all types of animals such as camels, elephants and flocks of sheep.As we neared  Dzongsar along the road to Chauntra, we were received with a Grand reception of about 75 people offering the traditional Khatas and lit incense. Our caravan now swelled to about 30 miscellaneous vehicles and several motorcycles, many in the lead waving colored khatas announcing our arrival and paving a path through the miscellaneous traffic of vehicles and assorted animals for our ever-growing group.

This reminded me of the tales my parents, Dagchen Rinpoche and Dagmo-la, often told me as a youngster about the Bir Tibetan Resettlement Communities. Only now the horses and hand carried palanquins were replaced by modern SUV’s and motorcycles.  We arrived amidst all the pomp and splendor afforded royalty and I was humbled by the fact Dzongsar Khentse Rinpoche was the first to greet us once we entered the Grand Dzongsar College Campus main gates. This brought to mind the Late Venerable Khenpo Kunga Wangchuk, the College founder and a highly revered Sakya master. It was his vision to build the magnificent Dzongsar Institute for Higher Studies, a legacy he wanted to continue from Dzongsar, Tibet, in honor of his lama Chokyi Lodro Rinpoche. He passed away in May 2008 during the 2008 Lamdre teachings by H. H. Sakya Trizin, perfectly timing his passing into Nirvana right after the teachings. My only regret is not having had the chance to meet such a great Master. However, I am happy knowing that my own son, Dhungsey Avikritar Rinpoche is partaking in that vision by studying here.

We had lunch with Dzongsar Khentse Rinpoche and rested, amazed by the enormity of the grounds and beautiful landscaping. They have solar panels atop the roofs and filtered water everywhere along with a variety of other modern appliances and grounds. Right after lunch we all went to pay respect to Jamyang Khyentse Chokyi Lodro’s memorial stupa at Khentse Rinpoches residence in Bir, about 3 kms from Dzongsar College.

I also was fortunate to be the first to open the latest edition of the annual magazine book which has many commentaries and poems written by the students who reside here, as well as details of the events of the past year. Dzongsar Khyentse Rinpoche bid us all well as he left to give afternoon teachings, leaving us all to finally rest and recoup.

On 03/01/2010 at 6:00 am we had a three vehicle caravan trek three hours (a short time compared to others) to a very Holy Site called Tso Pema where Guru Padmasambhava was born and performed many miracles. We went first to the cave where Guru Rinpoche meditated and were amazed and pleased to meet around sixty kind Nuns who opened their hearts to us once atop one of the many arduous hilltops we climbed. We performed a Tsok offering in one of the caves Guru Padmasambhava stayed in for many years and left photos of  my parents, H.H. Dagchen Rinpoche and Dagmo-la. Once word of the Sakya Dhungseys’ arrival became known, droves of Tibetan pilgrims came out of nowhere to be blessed.

On 03/02/2010 we were in a swirl of activity as the Dolma Phodrang’s Gyalyum Kusho arrived for lunch. Back at Dzongsar College we took a tour of the beautiful College Campus Grounds, the huge libraries, the traditional class rooms, the luscious gardens and we also saw where H.E. Dhungsey Avikrita Rinpoche would reside. His quarters are in the building that houses all of the khenpos.

Dagmo Kusho left the next day to visit Khamtrul Rinpoche and his family and to offer a manja to Kamtrul Rinpoche’s new monastery in Norbu linka.We also departed Dzongsar College the following day. Dolma Phodrang Gyalyum Kusho along with H.E. Dhungsey Avikrita Rinpoche and all the Khenpos drove along the roadside a few miles out to wish us goodbye. Saying goodbye to H.E. Dhungsey Avikrita Rinpoche on that rainy afternoon, many emotions crept inside my head and heart, all the pressure and stress from the last few days abated only to be replaced with a longing to be with my sons. I am reminded to be as poised and seemingly insensitive to all this, although it never is easy and as humans in this world. Without the support and compassion from H.H. Dagchen Rinpoche, Yab-la and Mama-la, our family members and most importantly, my extremely patient and compassionate wife, none of this would have been possible. I am comforted by the fact that many people have confided to me personally of all the good we are doing and that the future is bright. As I conclude my vacation, now that all of us have safely returned to the Phuntsok Phodrang in New Delhi, Dagmo Lhanze-la and I both look to be simultaneously positive and humble while steering our children toward a Dharma World hopefully as receptive and kind-loving as you have all been to us- Thank you! Hope to see you all soon.