In October of 2010, Ven. Tulku Yeshi, Ven. Khenpo Jampa and Chuck Pettis attended the International Conference on Tibetan Buddhism held at Emory University in Atlanta. The conference was hosted by H.H. Dalai Lama. The full video for the International Conference on Tibetan Buddhism is currently being put online at ww.tibetanbuddhismconference.com. The following are some notes by Chuck Pettis of presentations by H.H. Dalai Lama, Dr. Richard Davidson, and Prof. Robert Thurman. 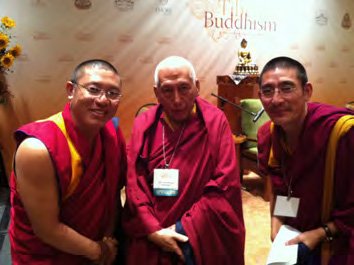 H.H. Dalai Lama
• Need to promote harmony among religions, sects, and traditions. Avoid competition.
• Pay more attention to the root teachings and texts rather than the “branches.” Don’t forget the root.
• Serve others as much as possible.
• Develop inner spiritual qualities and progress toward Buddhahood step-by-step.
• Preserve and seek the authentic Buddhist teachings.
• Create a platform of shared Buddhist behaviors.
• Regular coordinated meetings are important.

Professor Robert Thurman
• Buddhism has become intellectually overwhelming and leaves out emotion. We need more experiential practice. We need more simple study guides that are relevant, accessible and authentic. Learn and then practice. Teach experientially to transform lives.
• We need to look at what has worked and not worked and make changes accordingly.
• We need to integrate ancient wisdom with modern methods and develop “delivery systems” to demystify Buddhist teachings.
• The new therapy is where being and teaching merge.
• We should be servants of peace.
• Wisdom is an endangered natural resource.
• Buddha – the grand unified experience of the nature of reality.
• The mind controls gene expression.
• Be ethical – recognize the long term effects of actions – karma. If you kill someone when he is mad at you, he’ll just get madder.
• Religion is too intolerant – we should allow God to have the power to have as many religions as he wants.
• America is viewed around the world as the symbol of the free world. If America is demoralized, then that could be the end of the free world.