The immeasurable benefits of the Prayer Wheel are best summed up in the words of Shakyamuni Buddha who said, “Turning the prayer wheel is better than listening, reflecting, and meditating for eons.”

H.H. Jigdal Dagchen Sakya saw the virtuous benefit of expanding the Monastery’s prayer wheel assembly to allow more people to spin them and expand the merit field. Given that the lineage of the Prayer Wheel is original and unbroken, the benefit is enormous.

The new prayer wheels were made by Tibetan artisans from Kathmandu, Nepal. They are made of copper with the mantra, “Om Ah Hung Vajra Guru Padma Siddhi Hung” pressed clearly into the copper. Inside each prayer wheel, there are 100,000 Tibetan script reiterations of the same Padmasambhava mantra. When the prayer wheels arrived, they were stored in the temple. Knowing that they were there kept the project moving urgently along the sangha anxiously awaited the moment at which they would finally be unveiled.

The new prayer wheels were installed at Sakya Monastery by a crew of volunteers lead by one of His Holiness’ longtime practitioners, John Vichorek, Karma Lodro Zangpo. John is the Monastery’s construction manager and is responsible for the craftsmanship and metal work that has gone into this and many other projects at the Monastery. 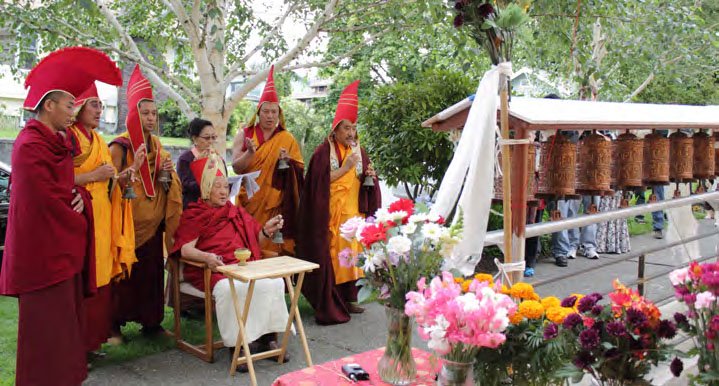 In a ceremony led by H.H. Dagchen Jigdal Sakya and esteemed lamas, the glorious 32 Padmasambhava prayer wheels were consecrated in a ceremony on July 3, 2010. In preparation for the ceremony, a single strand of red cord (symbolizing power) was strung from His Holiness’s throne table in the Shrine Room, through the far-east window of the Monastery and was carefully placed so that it touched each of the 32 prayer wheels outside. After the guru was “connected” to the prayer wheels, the initial blessing ceremony began in the Shrine room and lasted for 3 hours. Immediately following the blessing ceremony, His Holiness and the lamas moved outside and His Holiness led the actual consecration. The consecration ceremony concluded with the recitation of the prayer for increasing goodness called “Verses for the Groups of 8 Noble Auspicious Ones.” 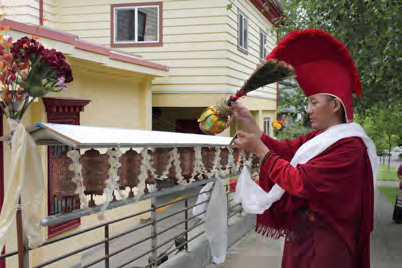 The Monastery has been through many changes over the years, each project building upon the last, aligning with His Holiness’ ultimate vision for the temple. Every aspect of building for the gonpa is a meritorious activity, involves skill, precision, mindfulness of other sentient beings, and meditative concentration.

What is a prayer wheel?

A Prayer Wheel is a meditational object consisting of an enclosed metal cylinder imprinted with mantras, auspicious symbols and deity images, which turn on an axis. When turned the wheel spins quickly, and it is thought that this action invokes the intended deity mantra, sends blessings in all directions, and expands the merit field of the practitioner. If there are multiple wheels turning at once the merit field is increasing in manifold dimensions and this is why having Prayer Wheels at the monastery is of profound importance.

Prayer Wheels in Tibet were made in a variety of sizes, styles, and materials. The larger ones often surround monasteries and stupas. Prayer wheels must be made under the guidance and direction of a Lama and are then blessed and consecrated. HH Jigdal Dagchen Sakya has guided this project definitively from start to finish.

How are prayer wheels used by practitioners?

Some Benefits of Using a Prayer Wheel

• The Meditational Deities, Dakinis, and Dharma Protectors help us when we turn a prayer wheel.
• Turning the prayer wheel has the power to quickly bless and guard you
• Turning this wheel with great remorse and confession will eliminate the five actions of immediate retribution, the four heavy (bad deeds), the eight wrong views, and the ten nonvirtues.
• If you turn the wheel by hand, whoever sees you turning the wheel, touches you or the wheel, remembers you or the wheel, is struck by the shadow of you or the wheel, will never go to the three lower realms and will be established on the stage of Buddhahood.
• Any man or woman who turns the wheel will obtain whatever they wish for that is in harmony with the Dharma.

Sakya Monastery is seeking donations to help defer the costs of the Prayer Wheel Project. Donors will have their name listed on plaques displayed near the stupa and prayer wheels. You may also donate on behalf of or in memory of a loved one. Donating is not only a way to increase merit, but is also a way to help preserve the art, culture, and teachings of Ancient Tibet. The immeasurable benefits of the Prayer Wheel are best summed up in the words of Shakyamuni Buddha who said, “Turning the prayer wheel is better than listening, reflecting, and meditating for eons.”

To make a donation, please go to www.sakya.org/donate