Our annual camping trip took place this year along the Mountain Loop Highway, east of Granite Falls at the Gold Basin Campground in western Washington. Before heading out, our abbot, Khenpo Jampa la, drew up the layout of the campsite for us.

We were to place the Head Lama tent at the head of the camp, with all the tents laid out in a circle. Encircling the entire camp circle were Lungtas (‘Wind-Horses’), Tibetan prayer flags. A tall order indeed!

I brought some Lungtas (prayer flags) that I had picked up in Chengdu and the Alcaraz family and the Lamb family bought the Sakya Monastery Dharma shop out of all the prayer flag in stock. As it turned out we had just enough flags to surround the entire campsite with not one string left over. Auspicious! 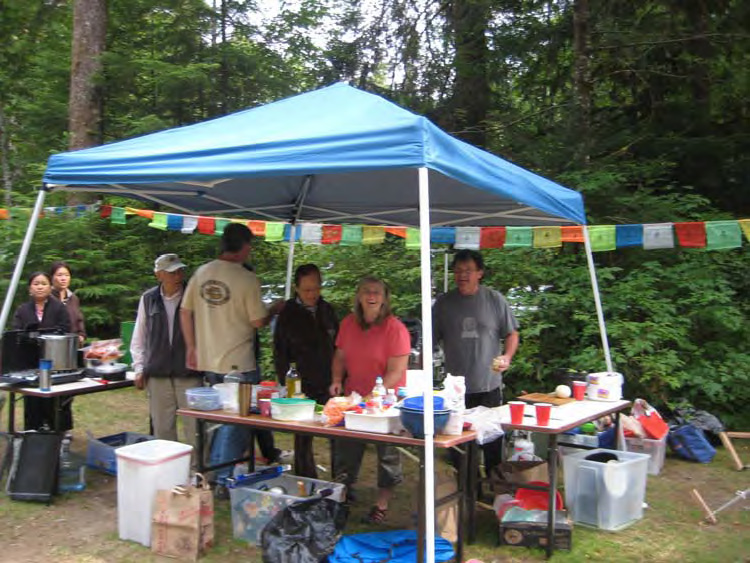 An army travels on its stomach and so does, apparently, the Sakya Monastery Sangha! We set up a large tent to store the food and a couple of shelters to serve as kitchen and clean up areas. The Friday night’s meal was a gourmet feast we all enjoyed after a wonderful day in the great outdoors.

After a grand feast for lunch, folks fanned out to go to the river, hiked the mountain trails or just lounged around at the campsite. We all gathered again in the late afternoon to wish HH Dagchen Rinpoche goodbye. If it was up to him, he would have camped the night but doctor’s orders were that he was not to stay overnight outdoors. After dinner, around the campfire, spooky stories and songs went from person to person around the circle, with Khenpo Jampa la and Tsering Gaga la singing songs in Tibetan. All the while, the kids were roasting marshmallows and running around out into the dark and back to the light, metaphorically like us grownups!

Saturday night, the rains came but everybody stayed dry throughout the night. The morning drizzle chased everyone from camp after a soggy breakfast. An afternoon downpour got the last of us to leave who were hoping for clearing skies.

The rain may have come but our spirits were not dampened and we look forward to next summer’s campout!