By Sharon Salyer
David Spiekerman has been a member of Sakya Monastery since 1999 and has served on its board of advisors since 2001. He currently is board president. His volunteer activities include: Coordinating volunteers and greeters; fundraising for both the shrine room’s carpet project and the prayer wheel project; helping codify greeter duties and sound system production; assisting in writing a security policy for the monastery and helping Tulku Yeshi translate his autobiography into English. 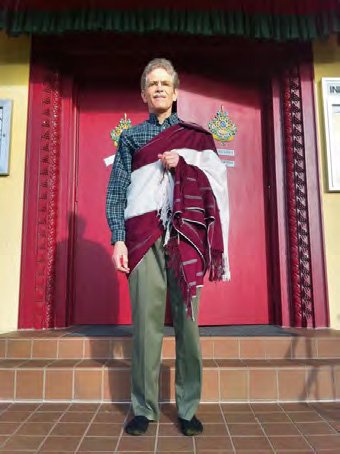 How many hours do you volunteer at the monastery each week?
Three to 10.

And you have a job as well. What do you do?
I have a business that I run…Small Changes….a wholesale magazine distributor with 10 employees.

So how do you juggle your responsibilities to work and family with your volunteer commitments?
The easiest time for me to really commit to was Sundays. I identified that time that would work for my family, myself and the Monastery and then I just made the commitment. I didn’t say, ‘Well, I’ll try a little bit here or there.’ I just knew that I have a busy life and I’ve got to find some time that I can actually volunteer and do it in a serious manner over a long term and that was it….It’s just managing your time correctly.

Could you talk a little about the reasons you volunteer?
A person who wants to volunteer should be aware of their lives, but still push through those limits to get rewards…to know you’re strengthening the position of the monastery. Ninety percent of the time when I’m volunteering I leave the monastery feeling, in simple terms, better than when I came. My volunteering is not about me. It’s about creating strong roots for Buddhism to flourish in North America as a culture.

Is there a short Dharma quote that guides you daily life?
Do not become attached to peace and comfort.

And you also memorized the text of The Aspiration of Samantabhadra in English?
Yes. I never thought I had a good memory. I never thought I had that capacity…Once I did it, it was a test to show me I was on the right path… I say it a couple times a day. It’s a very good practice…I’ll say it when I feel I want to ground myself.

You’ve been working with Tulku Yeshi,too?
When Tulku Yeshi came to the Monastery he knew no English. At first we went through learning English on books and tapes. Then…he could read fairly well and he was going to translate his autobiography from Tibetan into English…and I would transcribe that. His English got better over time. I had to fill in the blanks, but I felt competent enough to do it. I think there was mind transference going on there…it’s interesting. He’s read what I’ve written and he’s made very few corrections. That project has taken about four years. He came in 2003…we started in 2004 and we probably finished it in 2009… Now he wants to add a little more…He wants to talk about the last year.

That was a vehicle to have a conversation talking about his life. It’s a pretty intriguing story. You get to see the human part of him…growing up in Tibet in a very difficult time, the Cultural Revolution. But there were many things that happened before that which were even worse for his family. They were extremely poor.

What is your favorite Dharma book?
“The Essence of Mahayana Lojong Practice: An Oral Commentary to Geshe Langri Tangpa’s Mind Training in Eight Verses.”

I’ll summarize what it says:
• All beings are extremely kind.
• View yourself as lowly and respect others.
• Observe your mind and drive out bad thoughts.
• Cherish those who commit evil or suffer greatly.
• Accept blame without trying to defend yourself.
• One who harms you is kinder than one who helps.
• Give help and take on suffering.
• Remain pure and overcome attachment.

What do these sayings and this book mean to you?
You can see how if you are going to accept blame without trying to defend yourself you’ve got to have a lot of patience. That’s also equanimity there, too.

This little book is short, but very pithy and very practical. That’s another thing I memorized so that I can get help when I need it. That’s the point of memorizing these things. It’s a great help. There are times I recite them when I don’t need help. It’s just sort of expands my mental space.