(Speech given by David Spiekerman and the 50th Anniversary Celebration Event at Sakya Monastery on October 15, 2011) 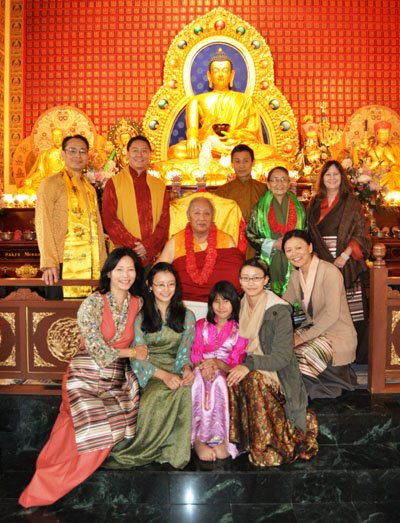 Good Morning. On behalf of His Holiness Jigdal Dagchen Sakya I would like to welcome you to our once in a lifetime celebration of the 50th anniversary of the arrival of H.H. Dagchen Rinpoche and Her Eminence Dagmo Kusho Sakya to Seattle.  On October 12, 1960 Rinpoche and his family stepped on the ground of the Pacific Northwest in North America and changed irrevocably the course of Tibetan Buddhism forever.

In October 1960, JFK had not been elected President of the US yet. The Cold War between the Soviet Union and the US was in high gear. For the white people in this country, samsara was showering them with many pleasures and economic well being. However for African Americans and most other dark skinned non-Europeans, life vacillated between the tolerable and the horrible.

In 1960 color TV was in its infancy. There were no personal computers or cell phones. FM radio was rare. I was 13 years old, and Murray Gordon was in his early 20’s.

In October 1960, the Seattle World’s Fair was two years in the future. The tallest building in Seattle was the Smith Tower. There was no I-5 or I- 405. There was no Microsoft, Amazon, Costco, or Starbucks. MacDonald’s had less than 30 restaurants nationwide. Pizza, Mexican food, and Thai food were unfamiliar to the majority of most Americans.

In 1960, if you saw an image of the Buddha in Washington State, it was probably in a small shop in the International District where you could buy a statue of a cute, wooden, fat, smiling, and happy Buddha. If you mentioned the word ‘Dharma’, people would give you a puzzled look and dismiss you as a boring nut case. In 1960, the Pacific Northwest was a virtual wasteland in terms of knowledge of the Buddhadharma.

Now please take a moment and look around you in this beautiful and peaceful shrine room and contemplate the vast distances that we have come from 1960 to 2011 thanks to Dagchen Rinpoche and Dagmo Kusho.

After witnessing the devastation of his homeland and fellow Tibetans in the years leading up to his flight to India in 1959, Rinpoche made a remarkable choice in 1960. Although he had to abandon the ancient sacred spaces in the monasteries of Sakya and his Tibetan homeland, he maintained with profound equanimity the most important sacred space, the one permanently residing in his mind. His omniscience empowered him to choose Seattle, of all the many other places in the Free World that he could have chosen to establish a new home for the Sakya lineage. And the kindness of strangers played a significant part that encouraged him to make his new home in Seattle

Rinpoche recognized, with his unalloyed clarity, that Seattle had fertile soil for the roots of the Sakya lineage to flourish and then to flower into great ornaments of the Dharma.

Thank you Rinpoche, for seeing the potential of Seattle to become a safe space for the Buddhadharma and the home of the Sakya lineage in North America.