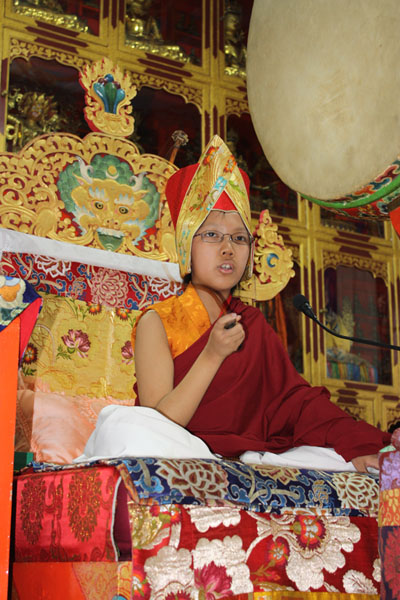 Taking refuge is the first step on the Buddhist path to enlightenment. In this lecture, you will learn the true meaning of Refuge and the Three Jewels. Taking refuge is the path and journey of all the Buddhas and Bodhisattvas; it is a commitment to engage in positive activities that benefit all living beings and it is a vow to achieve enlightenment not only for yourself, but for the benefit of all beings. In taking refuge, you are asking the Buddha, the Dharma and the Sangha to bless you and help you fulfill your goal. Additionally, he will be giving an oral transmission of the Aspiration of Samantabhadra.  This is a highest-level dedication prayer.  It is a dedication of merit and a commitment to the dharma.  Samantabhadra is sometimes translated as “the universal good.” This prayer of aspiration summarizes all the extraordinary activities of bodhisattvas, as well as both the profound and extensive paths.  For this reason, it is called “King of Prayers.”

His Eminence Khondung Asanga Vajra Sakya is the son of H.E. Dhungsey Ani Vajra Rinpoche and Dagmo Chimey Drolkar. He is also the grandson of H.H. Dagchen Rinpoche and therefore a direct descendent of the unbroken Khön lineage which dates back to 1073.  Asanga Rinpoche was born on May 1st, 1999 in Seattle, Washington. In April of 2005, at the age of five, Asanga Vajra Rinpoche left Seattle to begin his new life to live, study and train as a future Tibetan master who will further the Sakya Khön lineage. While at Tharlam Monastery in Nepal, Asanga Rinpoche has been receiving religious training from selected Tibetan monk scholars. In 2007, he received the Lamdre Tsogshay teaching from his paternal grandfather, H.H. Dagchen Rinpoche. The following year, Asanga Rinpoche received the Lamdre Lobshe teachings from his paternal grand-uncle H.H. Sakya Trizin. He has also received many other very important empowerments, teachings and religious instructions from other great masters such as H.H. the Dalai Lama, H.E. Chogye Trichen, H.E. Appey Rinpoche,  H.E. Luding Khenchen as well as his maternal grandfather, H.E. Garje Khamtul Rinpoche, who is a Nyingmapa master.