by Dennis Oliver and Stephanie Prince 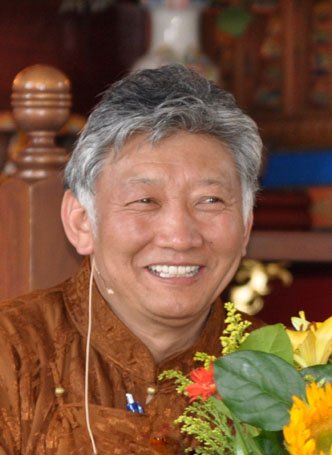 Lama Choedak Rinpoche who has been living and teaching in Australia for many years visited with us July 3-8, 2012.  He was accompanied by his son Sherab.

Lama Choedak is the author of “Lamdre:  Dawn of Enlightenment,” amongst other publications.  We were delighted and honored to receive the Buddhadharma teachings on several topics from Lama Choedak who is in the Sakya Tsarpa tradition of his Root Lama, Chogye Trichen Rinpoche.

Lama Choedak’s explicatory overview of the King of Prayers, The Aspiration of Samanthabhadra, was excellent.  He explained the 63 verses with great clarity and thoroughness.  Following the Buddha’s teaching of good in the beginning, good in the middle, and good at the conclusion, he delineated the prayer in that manner.  The beginning 14 verses cover the seven fold prayer which is the preparatory stage; then the actual prayer of the aspiration through verse 54 including the benefits of saying prayers; then the dedication of merit verses.  We learned a historical point that the original prayer contained 62 verses and that the Tibetan translators added the 63rd one.  Though it was an overview, it was quite detailed at the same time.  It was an exemplary explanation that we all enjoyed.

The second lecture covered the topics of Motivation and Meditation.  Lama Choedak stressed the importance of the linkage between them, and the need for being fully focused and mentally present for meditation to be truly meditation.

The two-day Calm Abiding Workshop/Retreat was well attended and again thoroughly engaging.  Lama Choedak continued with the theme of being present in our meditation practice during the retreat.

Lama Choedak taught what he called “active meditation,” where one conscientiously engages in a dialogue between the body and the mind. He introduced us to two practices:  scanning the body and the practice of qualified breathing.  Scanning the body involves actively checking the position of the body in the meditation posture, making sure it is in proper alignment.  One checks the body in stages: the legs which are the base, then the hands in the meditation mudra, then the spine, and finally the head.   In the practice of qualified breathing, one takes the breath as the object of meditation, breaking the act of breathing into three parts:  inhalation, retention, and exhalation, and, in turn, each of these is broken down into three parts.  Using inhalation as an example, there is the beginning when the breath crosses the tip of the nostril, the middle part of maximum intake, and the end just before the inbreath stops and the retention begins.  In this practice the mind is actively involved which helps avoid dullness and sleepiness.  These two introductory practices form a firm basis for practicing calm abiding meditation.

We were completely happy to have such a wonderful teacher come to Sakya Monastery and, of course, request that he return again and again!  We thank H.H. Dagchen Rinpoche for making all this happen. 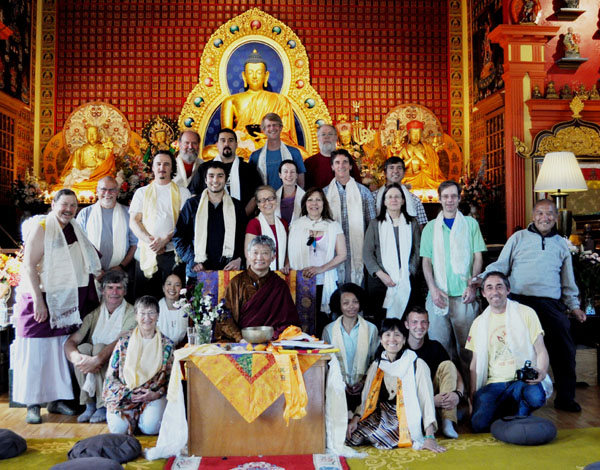