May 17, 2012—–Sakya Monastery was honored to host a World Affairs Council delegation from Indonesia. The delegation was composed of 11 members of various religious backgrounds: Muslim, Buddhist, Christian. They sat in a circle on the Monastery shrine room carpets; and led by Venerables Tulku Yeshi and Khenpo Jamapa, they learned a bit about Tibetan Buddhism. The delegation respectfully listened to Tulku-la and Khenpo-la and subsequently, asked questions. After group discussion and photographs, we all went down to the Cultural Hall for tea. It was heart warming to see the cooperation and respect between the various faiths. 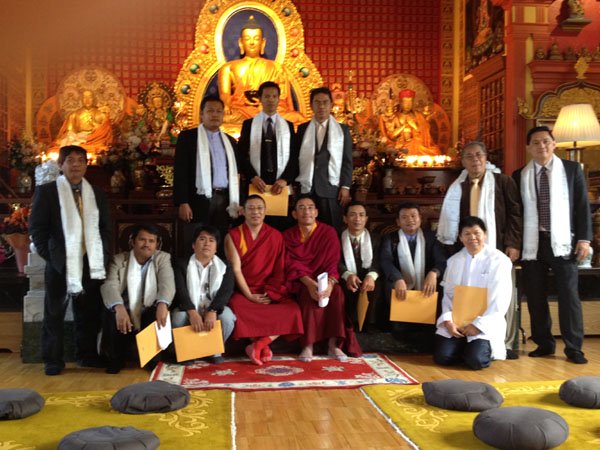 May 24, 2012—–On May 24th Bhikkhuni Venerable Guo-Jiann a visiting Buddhist nun from Taiwan met with Venerables Khenpo Jampa and Tulku Yeshi. The nun requested the visit so to learn more about Sakya Monastery and the Dharma in the west. While the nun and her attendants enjoyed tea in the Cultural Hall, Khenpo-la and Tulku Yeshi-la introduced them Tibetan Buddhism. The lamas explained to the nun and her attendant about the four sect of Tibetan Buddhism; the history of the Sakya Sect, which originated from the 5 Founding Fathers, over 900 years ago; and that the main Sakya Monastery is still active and that it is located in Sakya, Tibet. In conclusion, the guests went upstairs to our Holy Shrine room to pay their respects. 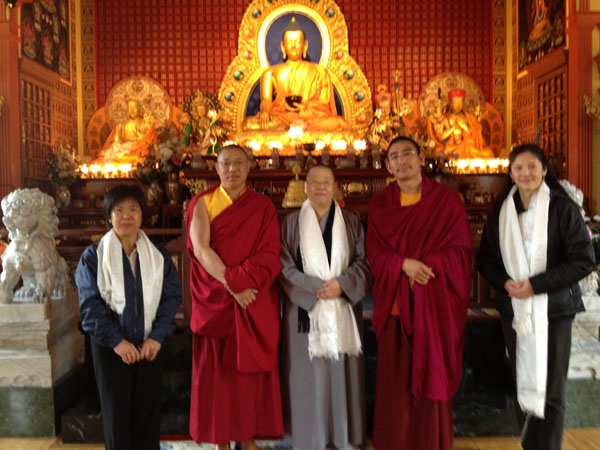 June 23, 2012—–The Harmony Run USA committee selected Sakya Monastery as their Seattle starting point for the 25th Anniversary of the World Harmony Run. The World Harmony Run was founded by Sri Chinmoy. It is a global torch relay that symbolizes humanity’s universal aspiration for a more harmonious world. The relay began in New York City on April 12th. Seattle was the 34th city on the Harmony Run USA relay route. The runners visited a total of 58 cities and returned the torch to New York on August 15, 2012. 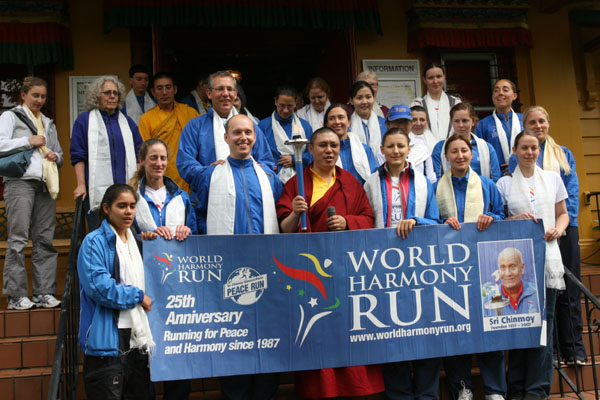 The World Harmony Program at Sakya Monastery began with tea and cookies in the Cultural Hall followed by a presentation of a katag to each of the 23 Harmony Run participants. The Harmony runners represented people from all over the world: Australia, Canada, Czech Republic, Mexico, Mongolia, New Zealand, Russia, Serbia, Ukraine, and USA. 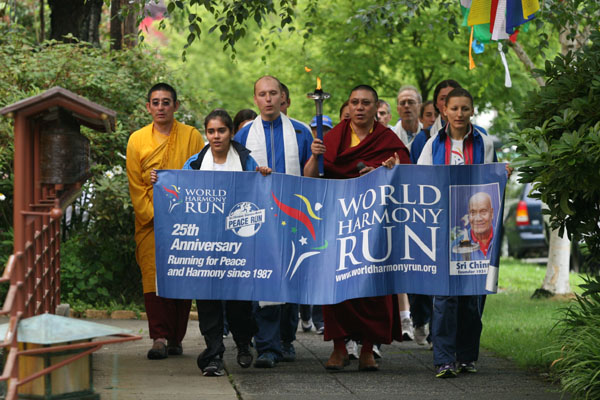 After the katag welcome, Tulku Yeshi and Khenpo Jampa each gave inspiring speeches for peace and harmony. The Harmony runners then sang their “World Harmony Run Theme Song”. In appreciation, the Harmony leaders then presented to Sakya Monastery a special medallion. The enthusiastic and warm-hearted group of international Harmony Runners and Monastery members then moved upstairs to the Shrine room to continue the program. 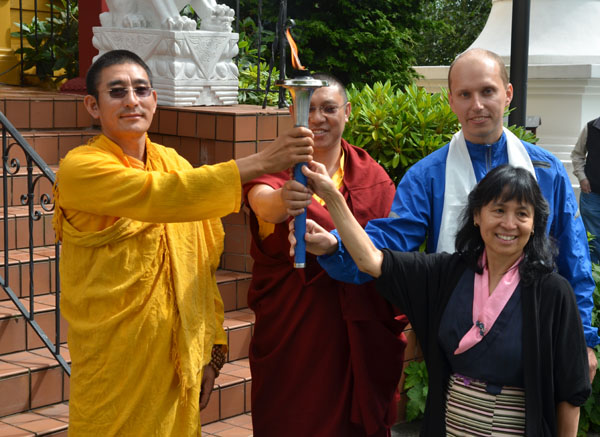 In the Shrine room, Tulku-la led them in a meditation and then they circumambulated the Buddha reciting “Om Mani Padme Hung”. The group then moved to the entrance steps, where the harmony touch was lit, a Certificate of Appreciation was given to Sakya Monastery and the march began… The entire program was memorable and awesome—the love, respect, camaraderie was beautiful and energizing!