Offered by H.E. Asanga Vajra Sakya
Sunday,  December 30th
Time: 10:00 am
Location: Shrine Room
Suggested contribution:
Public $35,  Members $30
Prerequisite: On the day of the initiation, one must be vegetarian (no eggs, meat, alcohol, or garlic) and celibate the entire day (24 hours). 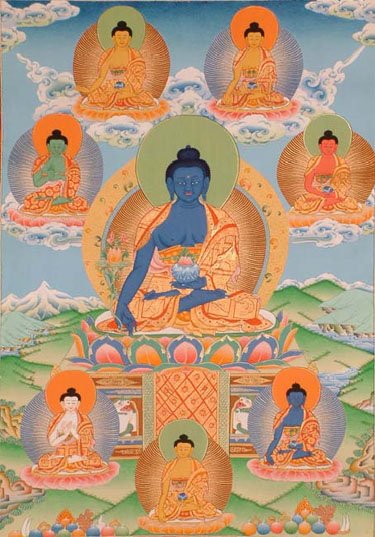 The Medicine Buddha, or Bhaishajyaguru, alleviates suffering, sickness, and injury and thus prolongs human life, improving the human opportunity to attain enlightenment.  The Medicine Buddha is a manifestation of Shakyamuni Buddha, who gave medicine teachings to the Fourfold Assembly.  He holds a medicine bowl and radiates healing rays of energy to all sentient beings.

His Eminence Khondung Asanga Vajra Sakya is the son of H.E. Dhungsey Ani Vajra Rinpoche and Dagmo Chimey Drolkar.  He is also the grandson of H.H. Dagchen Rinpoche and therefore a direct descendent of the unbroken Khön lineage which dates back to 1073.  Asanga Rinpoche was born on May 1st, 1999 in Seattle, Washington.  In April of 2005, at the age of five, Asanga Vajra Rinpoche left Seattle to begin his new life to live, study and train as a future Tibetan master who will further the Sakya Khön lineage.  While at Tharlam Monastery in Nepal, Asanga Rinpoche has been receiving religious training from selected Tibetan monk scholars.  In 2007, he received the Lamdre Tsogshay teaching from his paternal grandfather, H.H. Dagchen Rinpoche.  The following year, Asanga Rinpoche received the Lamdre Lobshe teachings from his paternal grand-uncle H.H. Sakya Trizin.  He has also received many other very important empowerments, teachings and religious instructions from other great masters such as H.H. the Dalai Lama, H.E. Chogye Trichen, H.E. Appey Rinpoche,  H.E. Luding Khenchen as well as his maternal grandfather, H.E. Garje Khamtul Rinpoche, who is a Nyingmapa master.  Having completed his formal ritual studies, in 2011 Asanga Rinpoche became the youngest ever to successfully lead the intricate rituals of the annual Vajrakilaya puja and consequently passed this challenging exam with excellence at the young age of twelve.  In the summer of 2013, Asanga Rinpoche will begin his further studies at the Sakya College in Rajpur, India under the tutelage of Venerable Khenpo Gyatso, the principal abbot of the college.