Hello to all of you! This is an informal personal article written by myself, Zaya Rinpoche (4th son of H.H. Dagchen Rinpoche), to inform interested readers on how and what transpired during the most recent trip overseas by H.H. Dagchen Rinpoche of the Sakya Phuntsok Phodrang. This article is just a simple insight into what I experienced while overseas on a Far East Trip as I accompanied my parents H.H. Dagchen Rinpoche & H.E. Dagmo Kusho. My main purpose was to monitor & manage the health of my Noble Father and offer any other services which presented themselves such as translating simple Mandarin Chinese into Tibetan or English, ticket procurement, scheduling, personal requests and baggage handling. Granted, several instances I had much assistance and quite honestly, the timely assistance by Tulku Yeshe & Khenpo Jampa was always welcome. 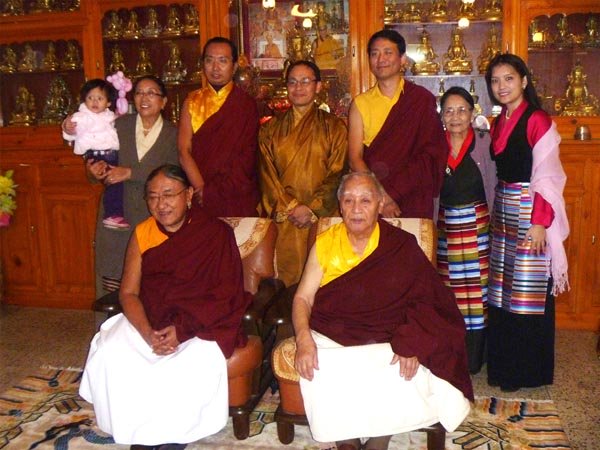 Accompanying His Holiness on the early stage of this Far East trip was Her Eminence Dagmo Kusho, H.E. Dhungsey Asanga Vajra Rinpoche & Tulku Yeshe. I flew earlier by myself to Delhi to pick up my youngest son, H.E Dhungsey Abhaya Vajra Rinpoche, and we both joined the group when everyone landed in Taiwan. H.E. Dhungsey Mati Vajra Rinpoche flew into Taiwan and joined our entourage later remaining with us throughout Hong Kong and part of our stay in India. H.E. Dhungsey Mati Rinpoche’s main focus was to accompany H.H. Dagchen Rinpoche and to overseas functions at the New Delhi Phodrang. Khenpo Jhampa flew by himself to India and awaited our arrival there joining our group along with H.E. Dhungsey Avikrita Vajra Rinpoche who was attending Dzongsar Khyentse Rinpoche’s teaching just after participating in the Dzongsar Monlam in Bodhgaya.

Our memorable Far East Trek began in the first country “Beautiful” Taiwan – filled with many precious moments and lasting memories words simply cannot convey the experience of our time there. The constant flash of picture taking and jockeying for the ideal snapshot kept ones eyes reeling from the initial impact upon our momentous arrival at Taiwan’s International Airport. Many familiar & new smiling faces greeted us and elaborate offerings of flower bouquets and Khatas were offered ushering us in with a pomp and splendor afforded Dharma Royalty.

Our first host group was headed by Lama Tashi & Chen Sheh Fan from the Tsechen Dekyi Choling Center (Sakya Sect). They sponsored our lodgings at the Regent Hotel in Taipei for one week. During this time, H.H. Dagchen Rinpoche was welcomed & offered the Long Life Mandala at their Center in Shinten. Everyday the schedule was filled with activities and H.H. Dagchen Rinpoche led events such as the Initiation of the Vajrakila Protectors Gauri and Marajita, the Prajnaparamita Obstacle-repelling Puja, Thangtong Gyalpo Long Life Initiation, the Initiation of the Yugu Chesum-ma (the special Sakyapa Wealth Sisters) & the Lamzab (Profound Path) Guru Yoga Blessing. In between these memorable events, H.E. Dhungsey Abhaya Rinpoche gave a Dharma Speech which was an informal insight into his personal life as a Dhungsey Rabjung (Ordained Monk of the Khon Dynasty) and vegetarianism. H.E. Dhungsey Asanga Vajra Rinpoche gave the Medicine Buddha Initiation, both of which can be viewed on Youtube. We also visited Sakya Centers in Tien Mou (Lama Ri Sengge-la) which is a Ngorpa Center founded by H.E. Ngor Luding Khenchen Rinpoche, performing the Vajrapani Bhutadamara Initiation. We then visited the Sakya Tharig Center in Taipei, where H.H. Dagchen Rinpoche bestowed the Red Dzambala Initiation and where the president of the center offered Dagmola a lovely necklace signifying our mutual bond. In addition, we visited the Karma Kagyu Center where H.H. Dagchen Rinpoche granted the Kurukulle Initiation & Dagmola gave a White Tara Initiation.

From Taipei, we traveled to Taichung where our second host group in Taiwan headed by Chimed Dorje Rinpoche (Kagyupa Sect) welcomed us and their kindness and generosity were only matched by their fierce devotion and sincere faith in H.H. Dagchen Rinpoche. Being the second time I visited these specific Centers in Taichung, many fond memories and new & old acquaintances were found. In Taichung, Chimed Dorje Rinpoche kindly afforded us the entire 7th floor of the Fallon Hotel and the view and food were fantastic. H.H. Dagchen Rinpoche bestowed the Medicine Buddha & Kurukulle Initiations and Dagmola performed the Green Tara Initiation. On the last day, lungs (oral transmissions) for Phowa (transference) and Chod (severance) were also given there and many loyal Dharma students came to participate.

While still in Taichung, we were welcomed by with our third host group led by Kathog Rigzin Chenpo’s Monastery (Nyingmapa Sect) where H.H. Dagchen Rinpoche performed the Red Dzambala Initiation (Union) & Vajrayogini Blessing. We stayed at Kathog Rigzin Chenpo’s residence and this was the only location in Taiwan actually resembling a Tibetan Monastery. For his age he is quite knowledgeable beyond his years. He is extremely devoted to H.H. Dagchen Rinpoche and as others, has read in length much of who H.H. Dagchen Rinpoche truly is, which makes me feel more appreciative of the fact that I am one of his sons and have access to him so readily. Kathog Rigzin Chenpo’s Monastery is enormous and has a Chorten (Stupa) in the back and a labyrinth of rooms within the Monastery as the layout was complex. The cuisine afforded us there was all unique & customized for H.H.’s special diet and much of the food was created by themselves, such as noodles & bread and, for the Dhungseys, there was always pizza available!

Our flight to Hong Kong was smooth and we were welcomed by a large group of people, a procession of Center Representatives and Followers of the Dharma Faith. The main host groups here were the Maha Sandhi Yoga Center and Sakya Tsechen Phuntsok Choling, which was opened by H.E. Dagmola. H.H. Dagchen Rinpoche gave the Guru Rinpoche Puja (Rigzin Duba Puja) at a large Buddhist school hall. This was rented by both the Maha Sandhi Yoga Center and the Sakya Tsechen Phuntsok Choling for many of the Dharma events and teachings during our visit. His Holiness also bestowed the Vajrakila Torma-Initiation of the Khon lineage, a Puja for World Peace, the Vajrayogini Blessing-Initiation & Red Dzambhala Initiation at the Maha Sandhi Yoga Center. At Sakya Tsechen Phuntsok Choling, His Holiness bestowed the Khon Lineage Vajrakilaya. .

Some of the benefactors of the Sakya Centre in New Delhi are the many students and Dharma followers overseas, such as members of the Maha Sandhi Yoga Center led by Dr. Lam, Edward Wong, William Wong and several other group members from Sakya Tsechen Phuntsok Choling led by Roland Yeung, and individual gracious benefactors such as Dr. Yeung and Yangche-ma. During our visit all these groups and individuals have been very supportive to H.H. Dagchen Rinpoche and H.E. Dagmola during their visits to the Far East. There were numerous people met on this trip which would encompass all the Tibetan Buddhists sects. Of these, I would like to note Pewar Tulku Rinpoche, who is a highly learned Rime Lama close to both H.H. Dagchen Rinpoche & H.E. Dagmola. Decades ago, going all the way back to Tibet, many precious teachings and vivid experiences were shared by them. Therefore whenever they meet it is always a time to reflect and reminisce of their time in Tibet. We also met the very learned Nyingmapa Master Alak Zenkar Rinpoche. Both Pewar Rinpoche and Zenkar Rinpoche share the special bond through samaya of being disciples of H.H. Dagchen Rinpoche as well as H.H. Dagchen Rinpoche’s own Gurus, Dzongsar Dorje Chang Jamyang Khyentse Chokyi Lodro and Dilgo Khyentse Dorje Chang Rabsal Dawa.

Although my time with my sons while I was in India was limited, the life of living in the Lama World requires extreme patience and flexibility, and I remind myself these times are precious just being with my Noble Father. Juggling a variety of emotions, H.E Dhungsey Abhaya Vajra Rinpoche stated so succinctly, “I am so blessed in that I have had the fortune of being in the presence of H.H. Dagchen Rinpoche, H.H. the Dalai Lama & H.H. Sakya Trizin all within days!”. Having spent time with my Noble Father throughout Taiwan & Hong Kong and now India, paying my respects to H.H. the Dalai Lama, then having traveled to Dehradun to visit H.H. Sakya Trizin, likewise, I too was both blessed and quite humbled. These are rare moments in one’s life that are to be clearly reflected upon. Events such as these stand out as extremely precious and I will always remember the blessings and unique fortune these experiences offered.

The road to Dharamsala was long and tiresome as our attempts to secure plane or train tickets proved unsuccessful. Anyway, the road to Khamtrul Rinpoche’s Monastery was clear and the welcome there was most warm as we arrived for a three-night stay. 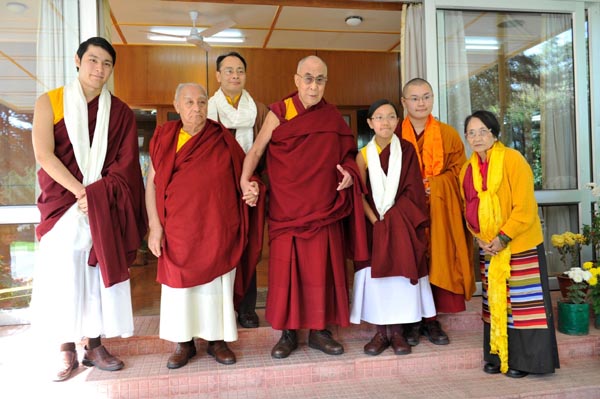 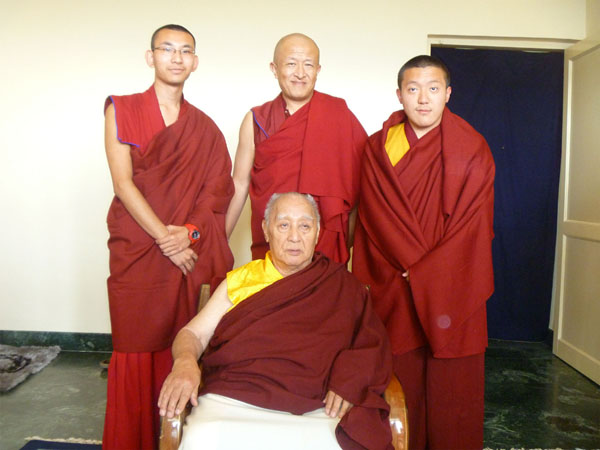 The visit to Dzongsar Institute was truly memorable as we were hosted by Dzongsar Khyentse Rinpoche and the Venerable Khenpos of Dzongsar Institute met several other high Lamas, such as H.E. Ngor Thartse Khen Rinpoche, Dilgo Khyentse Yangsi Rinpoche, Dudjom Yangsi Rinpoche, Orgyen Tobgyal Rinpoche and representatives of the Central Tibetan Administration. During this time we celebrated H.H. Dagchen Rinpoche’s Birthday and He bestowed several precious teachings. This is the site where H.E. Dhungsey Avikrita Vajra Rinpoche has been studying for three years with his close friend, Yangsi Kantsao Tulku. Yangsi is the reincarnation of Lama Kantsao who was a very close friend and student of H.H. Dagchen Rinpoche and they have a Center in Hong Kong. For the first teaching, H.H. Dagchen Rinpoche bestowed the Vajrakila Torma-Initiation according to the Sakya Khon Lineage; on the second day, H.H. Dagchen Rinpoche granted the Tsok Initiation of Guru Rinpoche (Padmasambhava) according to the transmission of Jamgon Mipham; and on the third day, a Long Life Ceremony (Tenshug) was held, concluding with traditional Tibetan performing arts exquisitely performed by local school children. For each event, thousands of faithful Tibetan, local and international disciples flocked to receive such sacred teachings and His Holiness’s abundant blessings.

There are many moments with H.H. Dagchen Rinpoche that nearly took my breath away. Although I’ve witnessed it numerous times before, His Holinesses’ poise in front of thousands of people is captivating and astonishing. I find myself in awe of how one moment we are discussing simple daily life details like the weather, then immediately, I assist him walk to a Monastery filled with hundreds of people to offer an Initiation! The innate ability to switch His mindset from one to another is staggering and requires unfathomable concentration and a uniquely stable mind. This can only be the result of precious blessings & training of realized Masters and years of experience.

If I were to state that the experiences of this trip were simple and easy then I would not be honest. There were many days which were more difficult than others and I believe it is what I can learn from these precious moments that will better define my experience. It was at opportune times I would retreat, and in solitude reflect and focus on the correct motivation and most importantly, peaceful thoughts of loving kindness and compassion – which is what H.H. Dagchen Rinpoche’s activities and this trip in particular are all about.