By Kristine Honda and Beth Johansen 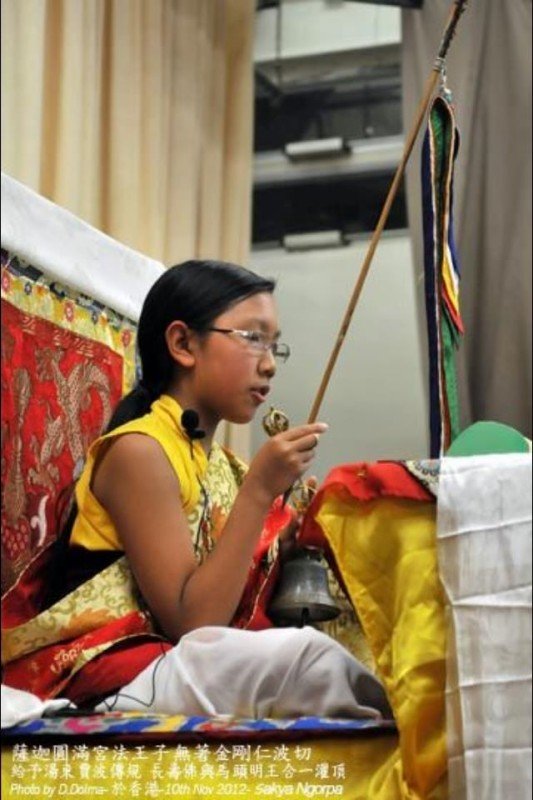 His Eminence Khöndung Asanga Vajra Sakya Rinpoche blessed the community of Buddha Dharma practitioners on his first visit to Taiwan and Hong Kong in the winter of 2012.  This article will be brief and provides additional information that was not included previously in the Sakya Monastery Newsletter article entitled “H.H. Jigdal Dagchen Sakya’s Trip to Asia.” 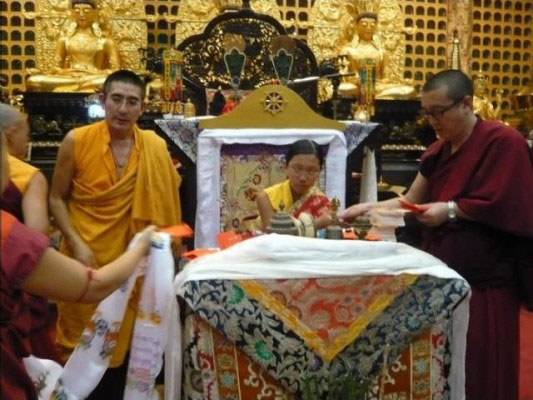 H.E. Khöndung Asanga Vajra Rinpoche felt very honored and privileged to be invited by his grandparents, His Holiness Jigdal Dagchen Rinpoche and Her Eminence Dagmo Kushok la to join them along with other family members on their first trip together to Asia in October of 2012. While in Taipei, Taiwan, H.E. Khöndung Asanga Vajra Rinpoche gave the Medicine Buddha Initiation and Teachings to a large congregation of devout students. The event was organized by Lama Tashi Rinpoche and Soyang Chen at a large hall. From all accounts, this empowerment was very well received and a rousing success on many levels. 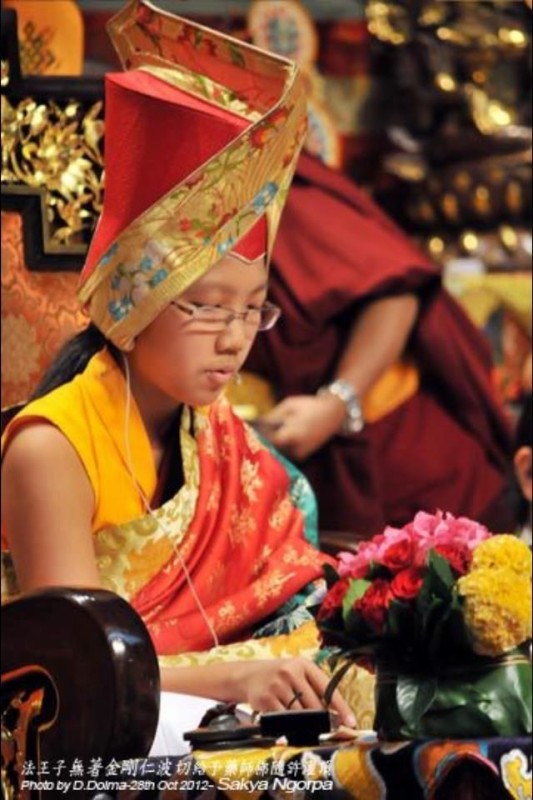 Due to the success of the Medicine Buddha Initiation and Teachings Asanga Rinpoche gave in Taipei, he was asked repeatedly requested by H.E. Chimed Dorje Rinpoche (a Kagyupa lama) and others to grant the same initiation in Taichung, Taiwan.  Before Asanga Vajra Rinpoche arrived into Taiwan, this initiation was neither planned for, nor on the agenda.  However, with the blessing and approval of his grandfather, H.H. Dagchen Rinpoche, Asanga Vajra Rinpoche agreed to do so.  Like in Taipei, the Medicine Buddha Initiation was also very well received and all those in attendance were very impressed and felt fortunate to receive this sacred empowerment from someone only 13 years old and a Sakya lineage holder.

While also in Taichung, Taiwan, Asanga Vajra Rinpoche also headed a Mahakala Puja at the special request of H.E. Kathog Rigzin Chenpo at his monastery.  As Asanga Rinpoche has performed many fire pujas in Nepal and India, this he happily and graciously granted since Kathog Rigzin Chenpo is a Nyingmapa lama with close connections to H.H. Dagchen Rinpoche and H.E. Dagmo Kushok la. 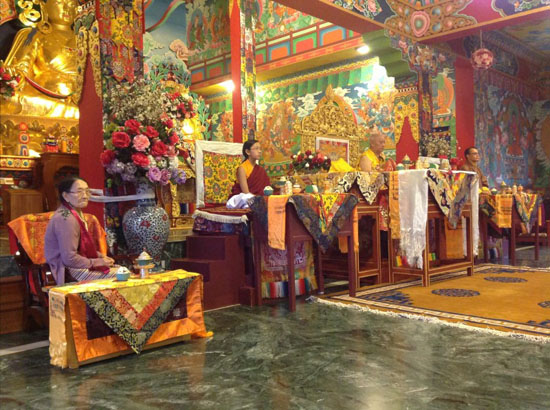 In Hong Kong, H.E. Khöndung Asanga Vajra Rinpoche gave a Amitayus-Hayagriva combination long-life Initiation and a comprehensive teaching and instructions on the practice of the deities to a packed hall. Amitayus is the Buddha of Long-life and Hayagriva is the wrathful deity who protects against obstacles and misfortune. This event was attended by over a 1,000 devout students and practitioners. Among the many attendees were Pewar Tulku Rinpoche and Alak Zenkar Rinpoche from Tibet along with a group of Tibetan monks.  Assisting Asanga Rinpoche were Lama Tashi Rinpoche and Asanga Rinpoche’s private tutor Gen Ngawang Rigdrol la.  As Asanga Rinpoche is fluent in both Tibetan and English, he spoke Tibetan within the initiation and gave translation and instructions in English which was then translated into Chinese making it easy for the sangha members to understand. Everyone came away feeling inspired by his teachings as well as his kind, calm, and humble nature as he bestowed the initiation with both grace and poise. This initiation was on the schedule and was also very well received and helped create and build, especially in the young minds and hearts of Chinese children in Hong Kong, the way and practice of the Buddha Dharma. 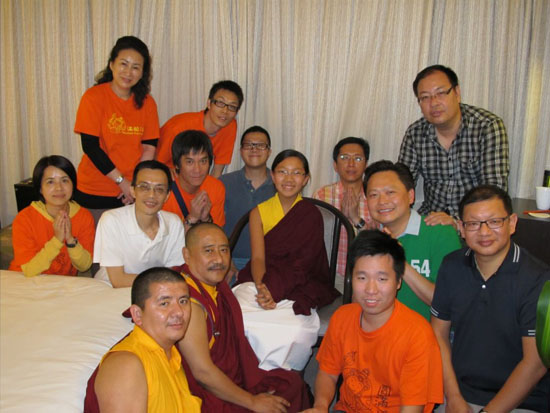 While also in Hong Kong, due to the obvious presence, bearing and accomplishments Asanga Rinpoche displayed to all those who came into contact with him, many Chinese Buddhist practitioners came unannounced to Asanga Rinpoche’s hotel room to ask for special blessings and protections which he could not refuse and graciously granted whenever there was time available.   Many, especially those members of the Sakya Tsechen Phuntsog Chöling, requested that due to their newfound faith they all have in Asanga Rinpoche, he return soon in the future to give more teachings and blessings.

All in all, it was obvious that Khöndung Asanga Vajra Rinpoche made quite a positive impression on all those in both Taiwan and Hong Kong.  He gave concise, clear Buddhist teachings and empowerments both in Tibetan and in English.  He also spoke to many in Mandarin Chinese also although he feels he is not as proficient as he would like to be.  All those in attendance found him amazing, inspiring and very beneficial, especially for someone only 13 years old.  Many also requested that Asanga Rinpoche return soon to both Taiwan and Hong Kong so that he may help keep the Buddha Dharma alive, well and prosperous. 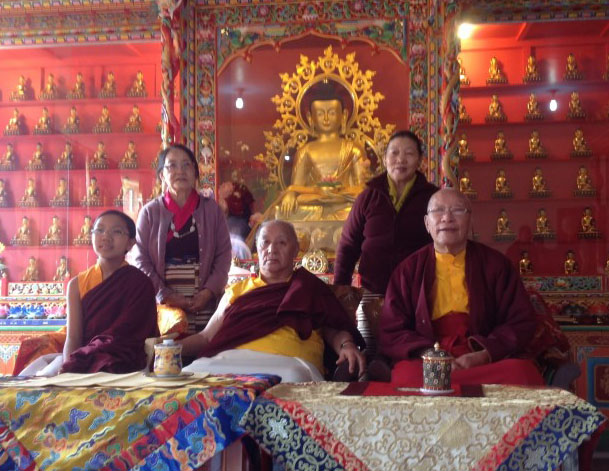 On a final note, after the visit to Taiwan and Hong Kong, while in India, the family was also able to go and stay at Asanga Vajra Rinpoche’s maternal grandfather, the unparalleled master His Eminence Garje Khamtul Rinpoche’s monastery in Dharamsala by the name of Lhundrub Chime Gatsal Ling.  This was the first time H.H. Dagchen Rinpoche had been able to visit it since its opening ceremony in 2009.  H.H. Dagchen Rinpoche stayed in a room especially and permanently reserved for Asanga Rinpoche which had been granted to him by H.E. Khamtul Rinpoche.