The Three Wand Sisters or “Yugu Chesum Ma” is a special practice of the Sakya lineage. They are Dharma Protectors who are summoned from Bodh Gaya in India to clear away obstacles on the path to enlightenment and to fulfil our needs and wishes. In particular, they provide abundance of food, clothing and wealth to support  practitioners and their families, and restore balance in the elements.

It is a wonderful opportunity that H.E. Sakya Dhungsey Avikrita Vajra Rinpoche is returning to Seattle to bestow the uncommon initiation of the Three Wand Sisters according to the unbroken Sakya lineage. With his inimitable warmth, clarity and insight, His Eminence will also provide a detailed explanation of the background and processes of the practice in fluent English. 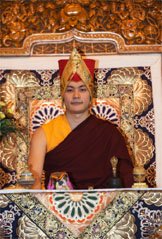 His Eminence Khondung Avikrita Vajra Rinpoche is the elder son of H.E. Khöndung Zaya Vajra Rinpoche and Dagmo Lhanze Youden, was born into the illustrious Sakya Phuntsok Phodrang in Seattle in 1993. At the tender age of six, he began his training in India to follow in the footsteps of his noble Khön forebears. Since that time, he has received an uninterrupted stream of transmissions and teachings, including the Lamdre Tsogshay, from his grandfather, H.H. Jigdal Dagchen Sakya. He has also received many teachings from his paternal grand-uncle H.H. Sakya Trizin (including the Lamdre Lobshe), and many high Lamas of the Sakya tradition. Having mastered the intricate rituals of the Sakya lineage, completed meditation retreats and presided as Vajra Master of the annual Vajrakilaya ceremony in Darjeeling, he enrolled at Dzongsar Institute of Higher Buddhist Philosophy and Research in 2010. There he is successfully building on his extensive learning in the Buddha-Dharma with a program of study and dialectics to gain proficiency in the classic treatises of the Sakya philosophical tradition.