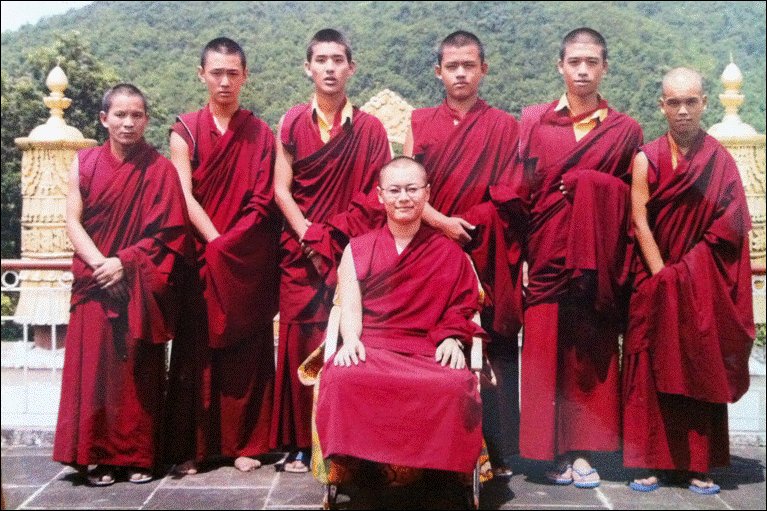 His Eminence Abhaya Rinpoche successfully completed the Vajrakilaya exam during the ten day annual Vajrakilaya ceremony in Dehra Dun, India. The ceremony, presided over by His Holiness Sakya Trizin, was attended by an unprecedented six lamas of the Sakya Khon lineage, three from the Drolma Phodrang and three from the Phuntsok Phodrang, as well as tulkus and lamas from the Sakya sect and over 500 monks.

On the day of the exam, August 21, 2013, Sakya family members including the parents of Abhaya Rinpoche, Dhungsey Zaya Rinpoche and Dagmo Lhanze, Dhungsey Sadu Rinpoche, his three Jetsunmas and Dagmo Pema, and H.E. Dagmo Kusho, all made mandala offerings to H.H. Sakya Trizin, H.E. Abhaya Rinpoche and his three teachers. And they made offerings of meals and money to the 300 monks participating in the ceremony and an elaborate feast for all including the lay practitioners who attended the ceremony that day.  Ordained representatives from all Sakya monasteries in India and Nepal as well as lay people came to make offerings and congratulate Dhungsey Abhaya Rinpoche.

According to Dagmo Kusho, Abhaya Rinpoche performed beautifully and eloquently. After the ceremony was completed H.H. Sakya Trizin informed the family that Abhaya Rinpoche “did very well”. He repeatedly congratulated Dhungsey Rinpoche and his teacher Gen. Kunsang Gyatso.  Everyone was very happy to hear this auspicious news.

Abhaya Rinpoche had been preparing for the Vajrakilaya ceremony for over one year. The eight hour ceremony involves memorizing over 400 pages of text as well as faultlessly keeping time with the drum while reciting prayers from memory.

Family members from the Phuntsok Phodrang were graciously hosted by the Drolma Phodrang during their 10 day stay in Dehra Dun. It was a beautiful and memorable time for the Sakya family.

H.E. Abhaya Rinpoche is now preparing at the Phuntsok Phodrang in New Delhi for retreat and prequalification education for college. In 2014 he will begin his higher studies.