In the Very Merry Month of May 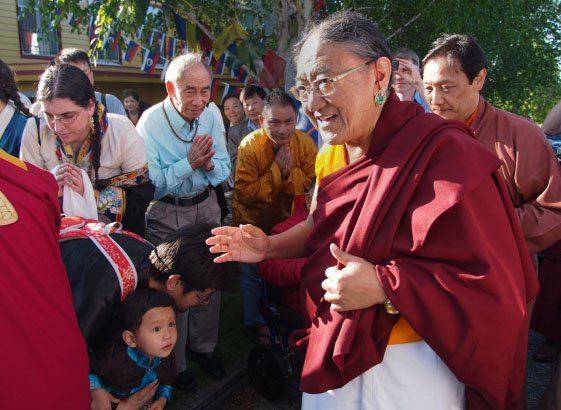 In 2013 and in 2014 in early May, His Holiness Dagchen Rinpoche and his family and the members of Sakya Monastery of Tibetan Buddhism were very pleased and delighted to host His Holiness Sakya Trizin and his entourage to Seattle. Many volunteers contributed to creating a wonderful and traditional welcome on both occasions with banners of Dharma victory, new prayer flags, traditional music, incense, and offering of ceremonial scarves (katags). 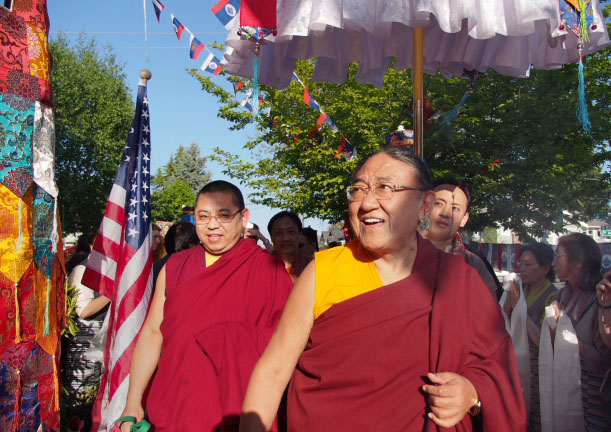 The schedule in 2013 (May 6-8) began on the evening of their arrival with a sumptuous dinner at an Indian restaurant sponsored by Tho Luu, a long time disciple of H.H. Dagchen Rinpoche. 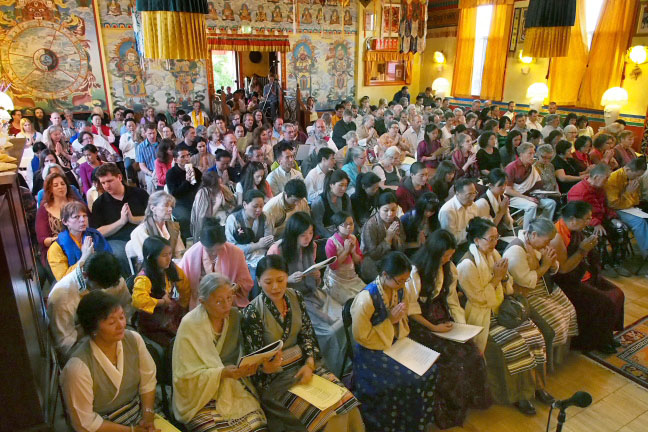 The next day H.H. Sakya Trizin, after receiving a Dharma King’s welcome at the Monastery, gave Mahayana teachings on bodhicitta and then bestowed the White Mahakala initiation. I remember his mentioning before the bestowal that some people would think there was a contradiction regarding the name “White Mahakala” because we are more familiar with Black Mahakala. But He assured us that there was no contradiction and that meditation on this form encourages the removal of poverty, generates harmony in the environment, and increases the well-being of all sentient beings. 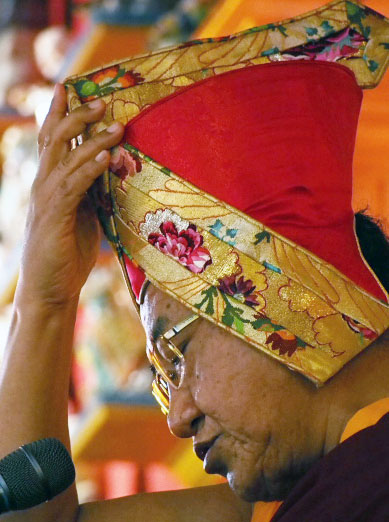 In the evening of H.H. Sakya Trizin’s last day here, he met with the Tibetan Association of Washington and gave a Vajrakilaya blessing. Shortly afterwards on that same evening, H. H. Sakya Trizin joined H. H. Dagchen Rinpoche as we all gathered to conduct our monthly Gurgyi Gonpo Mahakala Torma puja. It is so inspiring to be able to practice with the great masters of the lineage. 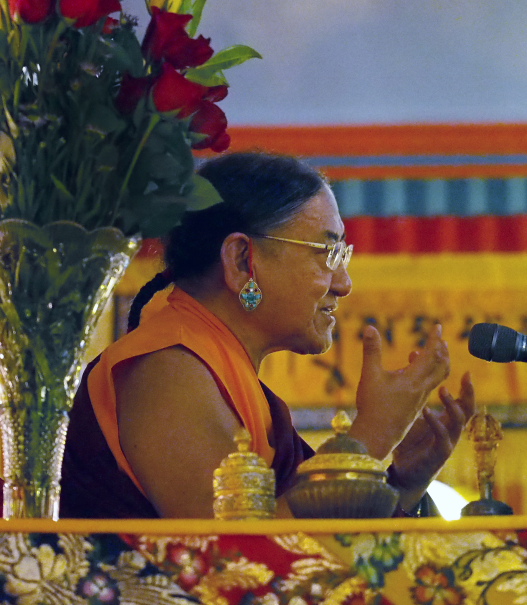 In 2014 we were exceedingly fortunate to have H. H. Sakya Trizin visit us once again and several programs were planned. On the first evening of teachings, H.H. Sakya Trizin gave us a detailed and enlightening Dharma lecture on “How to Be a Good Buddhist”. He stressed the importance of first being a good human being. Then he gave a clear explanation of what makes us a Buddhist. From the method side, we take our Refuge vows in the Buddha, Dharma, and Sangha, and, in the Vajrayana, in the Guru who is inseparable from them. Then from the wisdom side, we have an understanding and acceptance of the four seals: that all composites are impermanent; that all defilements/obscurations are suffering; all phenomena have nature of emptiness; and nirvana (transcendence of suffering) is peace. 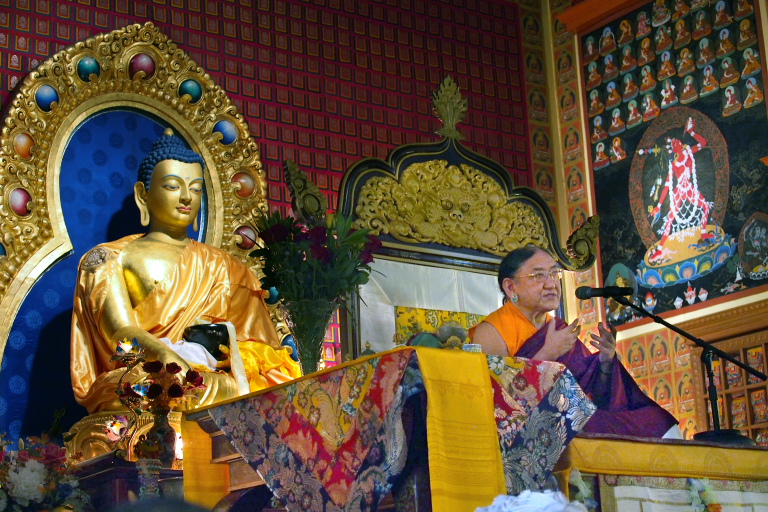 On Friday late afternoon, May 9, H. H. Sakya Trizin met with the Tibetan Association of Washington community of family and friends. He gave a general talk and then bestowed a Powa transmission as requested. 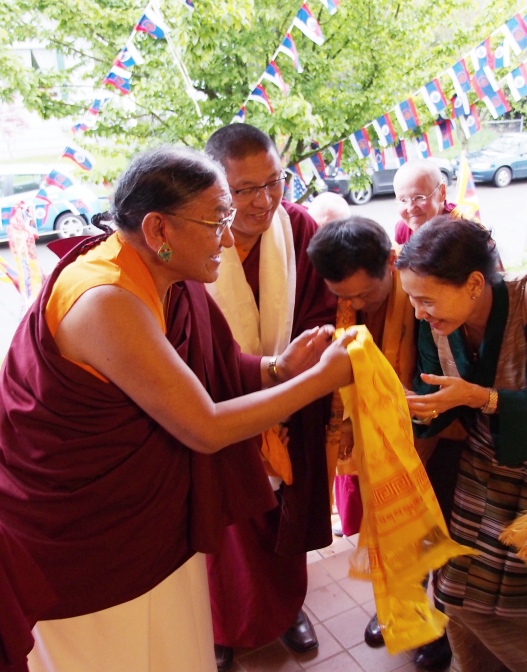 Later in the evening, H.H. Sakya Trizin bestowed the initiation of the 1000-armed Chenrezi Bodhisattva of Compassion. It was very auspicious to receive this especially because next month during Saka Dawa (Holy Buddhist days), a special meditation retreat focusing on this tutelary deity will take place. As part of the preliminary teachings His Holiness told us about the three types of creating the enlightenment thought: as a king [or queen] who after being enthroned uses their power to help people; or as a sailor who travels together with the passengers to reach the destination; or as a shepherd who sends the beings first and remains last—this is considered the greatest type like that of Chenrezi. Then His Holiness told us the story of the 1000-armed Chenrezi and how after making a vow never to abandon beings or he would split apart if he did, Chenrezi did get discouraged when he saw that so many beings still were suffering even though he had liberated so many others. And thus he split into many pieces when he thought he could no longer keep his vow. However, his spiritual master, Amitabha, took pity on him and restored him with 1000-arms and eleven heads. 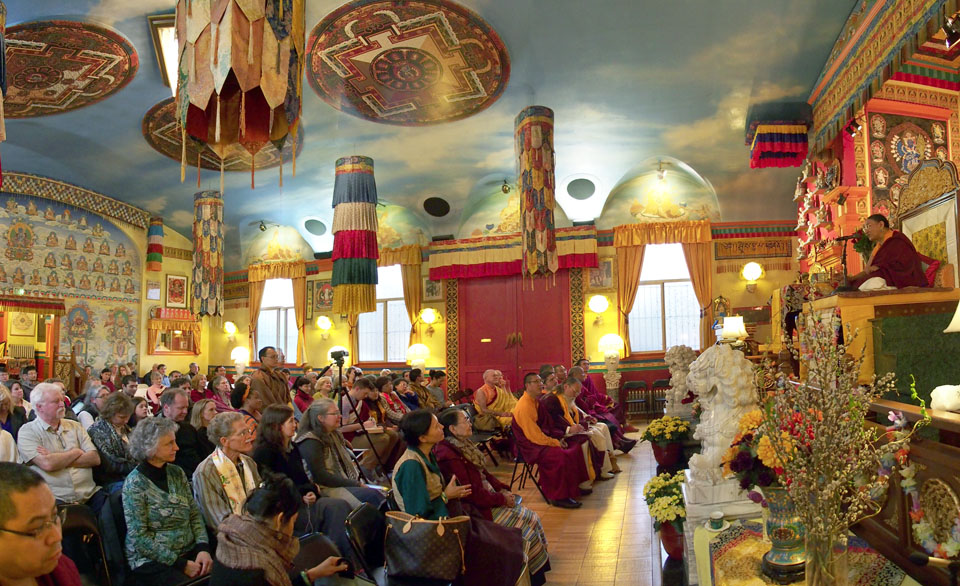 After this most sublime initiation, mandalas and the symbols of body, speech, mind, qualities and deeds of the Buddha were offered by the Sakya Phuntsog Family and then by the Board of Advisors and patrons. Long life prayers were recited and our traditional Happy Trails song was sung. Thank you Root and Lineage Lamas for all your blessings and activities dedicated for the benefit and liberation of all beings.

Sarva mangalam. May all be auspicious