On August 10, 2013, members of the Sakya family, accompanied by Gillian Teichert, departed from Seattle for Asia in order to attend H.E. Abhaya Rinpoche’s Vajrakilaya exam and ceremony in Dehra Dun, India.  En route to India the party first stopped in Hong Kong where Dhungsey H.E Sadu Rinpoche and H.E. Dagmo Kusho were invited to give teachings at the Mahasandi Yoga Center and the Hong Kong Sakya Center.  Sadu Rinpoche gave Chenrezi and Medicine Buddha oral transmission and teachings as well as the Three Long Life Deity oral transmission and teaching.  As always, the Sakya family enjoyed the hospitality of Mr. Edward Wong from the Mahasandi Yoga Center and Mr. Roland Yeung from the Hong Kong Sakya Center.  They were grateful for all of the help from friends and students at these two dharma centers. 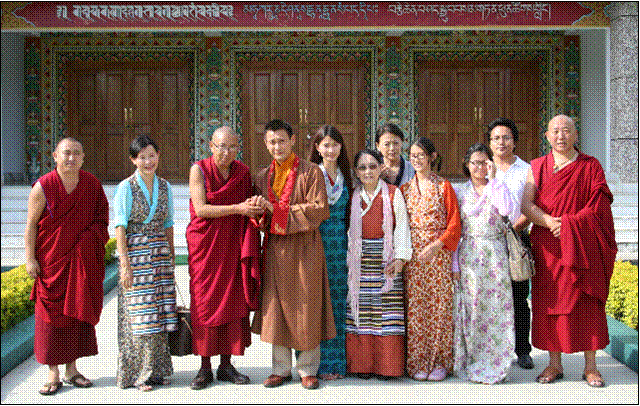 In New Delhi, the travelers were greeted by the 72 monks and teachers at the Phuntsok Phodrang.  Dagmo Kusho was glad to see that the 40 new monks, who she met for the first time, were all happy, healthy and studying hard.  They even spoke a little English!

On August 20th, the Seattle group with attendants from Delhi, arrived in Dehra Dun, one day prior to the Vajrakilaya exam.  There was much preparation to be done.  The next day the family, including Dhungsey Zaya Rinpoche, Dhungsey Sadu Rinpoche, his daughters, Jetsun Soyangla, Jetsun Chodronla, and Jetsun Dechenla, Dagmo Kusho, Dagmo Lhanze, and Dagmo Pema were to make elaborate offerings to His Holiness Sakya Trizin Rinpoche, H.E. Abhaya Rinpoche and his two teachers, and all monks present at the Vajrakilaya ceremony.

The Drolma Phodrang graciously welcomed the whole family including attendants. Family members of both holy palaces enjoyed meals together every day. It was a beautiful and memorable time. In all there were nine Khon lineage holders plus four jetsunmas, five dagmos and extended family at this family reunion in Dehra Dun.

According to Dagmo Kusho, H.E. Abhaya Rinpoche performed beautifully on his exam. She could hear his voice clearly since she was seated nearby during the ceremony. “He had such a deep voice with no accent and was fearless,” said Dagmo Kusho of Abhaya Rinpoche’s performance. After the exam the two families gathered again at the Drolma Phodrang. As they sat down for the evening meal His Holiness Sakya Trizin Rinpoche said, “Abhaya Rinpoche did very well.” Everyone was so happy. What an auspicious day for the Sakya Khon lineage and all sentient beings!

During the next few days, the visitors made offerings at many monasteries and nunneries. Twelve were visited in person and three had offerings sent to them. Those visited were Sakya College, Sheta College, Kyigu Monastery in Kanwar, Sakya Puliwala and Dzongpa Monastery. Each received money offerings and a manja; occasionally, a full lunch was sponsored. With so many august personages present, Dehra Dun offerings were the most elaborate.

Back in New Delhi, the travelers stayed for two more days at the Phuntsok Phodrang. They offered a puja and gifts to all of the monks. Dagmo Kusho had ordered shirts for the monks from the Sakya Vietnam Center. The 72 monks received clothes, money, and a special meal during the all-day puja.

From New Delhi, Dhungsey Sadu Rinpoche and family, Dagmo Kusho and Gillian Teichert traveled to Nepal where they visited and made offerings at four more monasteries and a nunnery and made offerings including: Tharlam Monastery, Tarig Monastery, International Buddhist Academy (IBA), a Sakya nunnery in Kathmandu, and Chogye Monastery. They stayed seven days in Nepal. Every day there was a special long life puja for His Holiness Dagchen Rinpoche. At Tharlam Monastery the Sakya family sponsored two days of puja and offerings, including lunch and dinner for the monks.

Dhungsey Sadu Rinpoche and family and attendants visited pilgrimage sites in Pharping, Swayambunath and other holy sites including Lhug Gang Kye (Tib) or Shref Budhanilkantha Bishnu Bhagwan (Nep), the site of the self-arising statue from the middle of a lake. Dagmo Kusho tried to spend every moment with her beloved 94 year old aunt and nun, Ani Chimey. Ani Chimey resides at Tharlam Monastery, which was founded by her brother and Dagmola’s uncle, the late Dezhung Rinpoche III. Tulku Dezhung Rinpoche IV is 23 years old and is studying at Sakya College in Dehra Dun.

Although Dagmo Kusho did not have plans to teach while in Nepal, a request came for her to give a White Tara initiation. Since the request came from a very devoted student of H.H. Dagchen Rinpoche, Dagmola could not refuse. The student has been in solitary retreat since he received the Lamdre initiation from Dagchen Rinpoche seventeen years ago! Dagmo Kusho bestowed the White Tara initiation to Guru Rani and 150 devotees at the Guru Ama Rani Center in Kathmandu on August 31, 2013.

On the last day before the group was scheduled to return to Seattle, Dagmo Kusho received news that the monks who were to accompany her to the long-anticipated teachings in Spain, had received their visas.  H.H. Dagchen Rinpoche had been invited to give teachings at the Sakya Center in Barcelona, Spain, however he was not able to travel at the time so Dagmo Kusho was invited.

Dagmo Kusho and two monk attendants from the Phuntsok Phodrang in New Delhi, arrived in Barcelona on September 14, 2013.  Over the next six days at Sakya Tashi Ling, Dagmo Kusho bestowed a Green Tara initiation and teaching, a Chenrezi teaching and refuge vows. Dagmola very much enjoyed the natural beauty and scenery at this dharma center set peacefully atop a mountain in Barcelona and she was moved by the faith and devotion of students in Spain.

One day the group traveled to another dharma center in a village several hours away. The scenic ride on country roads lined with pomegranate trees, flowers and fruits of every kind was relaxing and pleasant. Although Dagmola has been travelling several weeks, she found her time in Spain to be regenerative due to the warm hospitality of Lama Jamyang Tashi, Kutsap and center members.

Dagmo Kusho returned to Seattle on September 20, 2013, and spent a few days at home before embarking for southern California where she gave 10 days of teachings at centers in Santa Barbara, Malibu, San Gabriel, and Santa Monica. In Malibu she stayed with her son H.E. Dhungsey Minzu Rinpoche and Dagmo Carol. Her eight-week round-the-world tour was a busy time but Dagmo Kusho stayed healthy and accomplished many activities for the dharma and all sentient beings.