By Peter Ober, from an interview with Tulku Yeshi Rinpoche

Ven. Tulku Yeshi Gyatso and a group of Monastery members traveled to India in November, 2013 to go on pilgrimage to the Buddhist holy sites of Bodhgaya, Vulture Peak, and Varanasi.  This interview is about that trip. 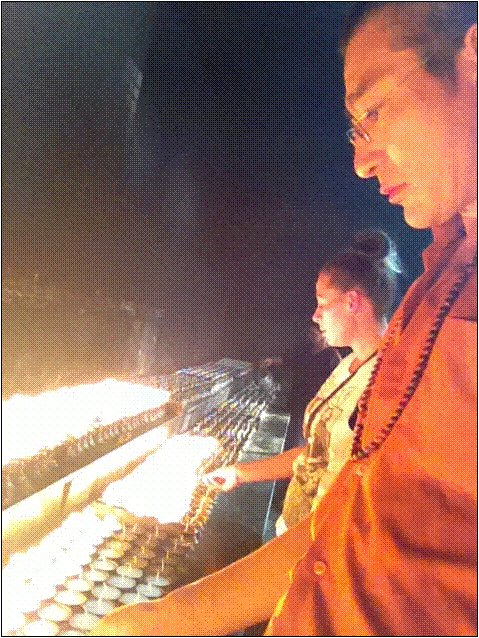 Peter: Tulku Yeshi, what was your original motivation in organizing a pilgrimage to India?

Tulku Yeshi: In the beginning, my goal was to visit my parents. I had not seen them since I left Tibet twenty years ago! I missed them very much, and I was worried that they would soon be too old to travel. Since it would have been difficult for me to travel to Tibet, I thought of offering to fly them and my brother to Hong Kong and meeting them there.
Then I realized, Hong Kong is about a six hour flight from India; why not invite my Dharma sisters and brothers along, too? So I announced the idea of a pilgrimage and invited those who were interested to join me in India.

Peter: It must have been very emotional for both you and your parents to see each other after so many years and then to say goodbye again!

Tulku Yeshi: Don’t forget, we‘re Buddhists! I kept the lines from our Thursday Chenrezi Practice in my mind: “That which is united is separated, that which is accumulated is consumed, that which rises must fall, and that which is born eventually dies: These are the four conditions of impermanence.”

Peter: What sites did you and your fellow pilgrims decide to visit?

Tulku Yeshi: We decided to meet up at the Tibetan Refugee Camp in New Delhi and then to concentrate on the three places of central importance for the Buddha and his Teaching: first Bodh Gaya, then Vulture Peak, and finally Varanasi.

Peter: Please tell us about your stay in Bodh Gaya and its importance for Dharma students.

Tulku Yeshi: Bodh Gaya is the Center, the most important pilgrimage site for all Buddhists, because it was there, on the banks of the Naranjana River, that the Buddha meditated for six years and finally attained Enlightenment under the Bodhi Tree.  King Ashoka built the first temple there, and that is where the great Mahabodhi Temple Complex is located today.

Peter: Is the original Bodhi Tree still there?

Tulku Yeshi: Children of King Ashoka carried a cutting from the original tree to Shri Lanka and planted it there. Later, Muslims destroyed the roots of the original tree, so a cutting from the Shri Lankan tree was returned to Bodhi Gaya and planted there, and now the blessing of the original tree is available once again. It’s just like the Buddha’s own blessing passing down through the Lineage to us today!  We stayed in Bodh Gaya for four full days. While there, our group participated in reciting the Twelve Deeds of Lord Buddha and the Seven Branch Prayer and also offered up personal prayers. I also gave several short teachings, and, of course, we meditated. We also practiced Chod together on the banks of the Naranjana River

Peter: And what is the significance of Vulture Peak?
Tulku Yeshi: Lord Buddha gave many Sutra Teachings there including the Heart Sutra, which was translated into many languages over two thousand years ago. We chant it today in our Sunday Chenrezi Practice.

Two great disciples of the Buddha, Shariputra and Maudgalyayana, also gave many teachings there. It is an extremely holy place. When the sixth Dalai Lama made a pilgrimage to Vulture Peak, he did not see grass and stones, but Dharma books piled as high as a mountain, and since they contained the sacred words of the Buddha, he refused to step on them. Instead he made prostrations at the foot of the mountain. Many other people have had similar experiences. Everything there is blessed, the plants, the wildlife, even the rocks.  When the Buddha taught at Vulture Peak, by his power all the people on the mountain could hear him perfectly clearly, every one in his own native language!

Peter: We have a picture of you and your students in a cave labeled “Vulture Peak.” Can you explain its significance?

Tulku Yeshi: There are several caves there. The picture was taken in Shariputra’s Cave, where he sat after the Buddha’s Teachings to answer disciples’ questions. From the top of the mountain, the Buddha knew that the answers Shariputra gave were his own. I lit six candles in the Cave for the Six Perfections.

Peter: Now, please tell us about Varanasi. What makes it so special?

Tulku Yeshi: Many different religions made Varanasi what it is today. The Ganges River is there, and that makes it sacred to Hindus.

Peter: Why is that?

Tulku Yeshi: Because they believe that the Ganges came from Shiva’s hair. “Vara” and “Nasi” are the names of two rivers, and Hindu pilgrims will travel thousands of miles to bathe in the sacred waters there and to purify themselves.

It was a very holy site long before the time of the Buddha, so after reaching Enlightenment he traveled to Varanasi and began teaching the Four Noble Truths there, knowing that the five old friends who had performed austerities with him before his Enlightenment would understand the new Teaching. They were very strong practitioners and he knew many others would follow if they became his disciples, which they did. Many Hindu masters were at also Varanasi together with their students, and they also became his students. So Varanasi became the hub of the wheel of the Buddha’s Teachings and remained so until the end of his life.

Peter: How wonderful that the different faiths coexisted back then! Today, it seems so much violence has broken out between the different religions in India and in many other places as well. As Buddhist pilgrims, did you ever experience tension with the local people?

Tulku Yeshi: Not at all! The local people know the benefits of Buddhism and of being open-minded about other religions. That’s why the Dalai Lama himself says, “India is the best example of how other religions can coexist peacefully.” In Varanasi especially we saw Hindu, Buddhist, and Muslim temples next to each other. Hindus believe that Vishnu has ten thousand emanations, and one of them is the Buddha. That’s why Gandhi said, “Buddhism is part of Hinduism.”

Peter: Do you think you will be leading any more pilgrimages in the future, and if so, what changes would you make?

Tulku Yeshi: Yes, certainly! If there is enough time, I would love to include southern India in the next pilgrimage and to visit the Ajanta and Ellora caves, which were made famous by the Buddha’s followers.
Westerners are actually at an advantage because Indians speak English throughout the country. The challenge is the food, water, and air, which are not up to the standards which Americans expect. Fortunately, we had no problems this time. One thing I did learn this time was how important it is for future pilgrims to be completely honest with themselves about their motivation. They should be 100% sure in their hearts before signing up. Then everything will go well.

Peter: Thank you so much, Tulku Yeshi. I’m sure many Sangha members will want to follow you on your next pilgrimage!