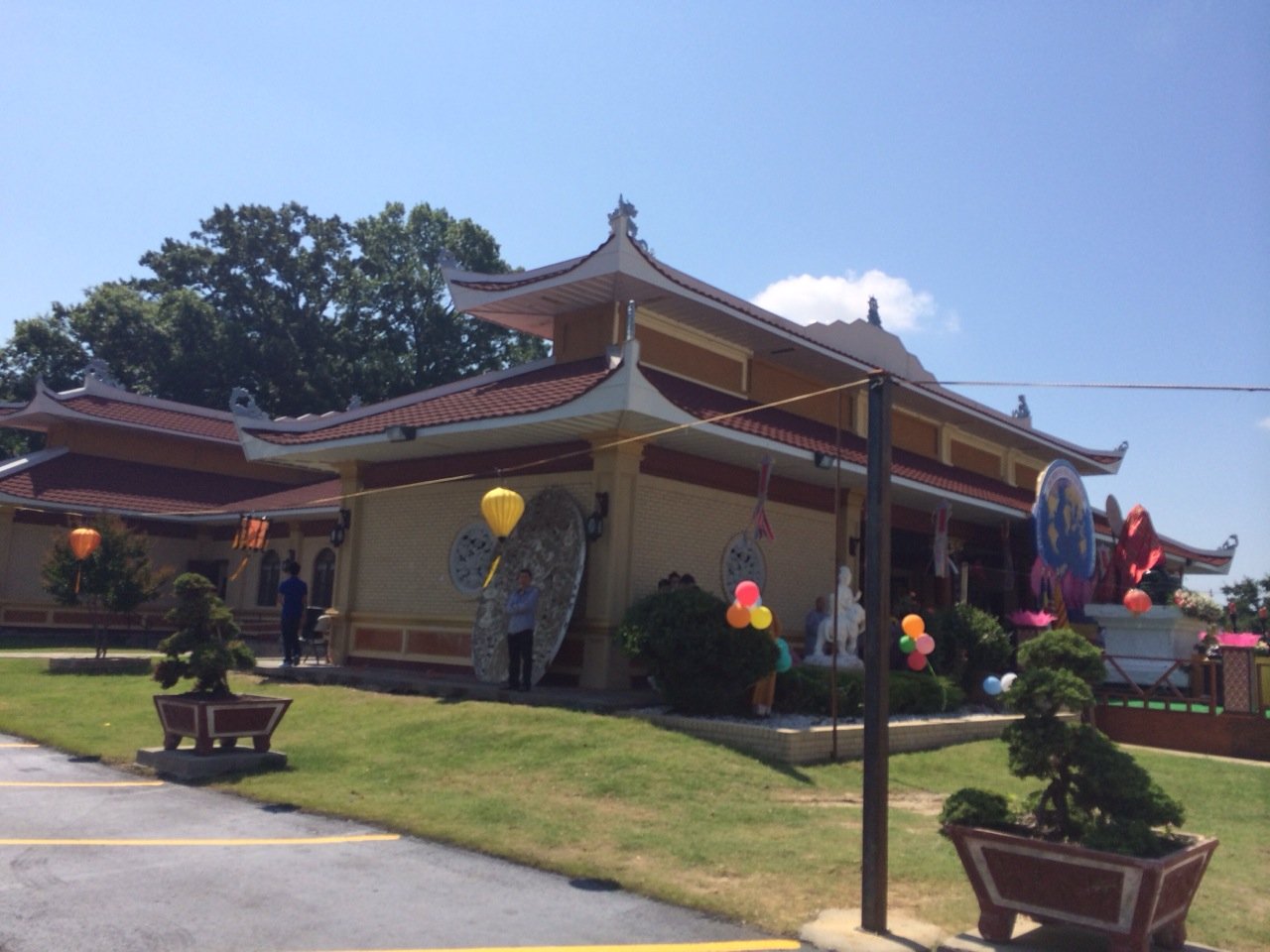 In June 2014, His Holiness Dagchen Rinpoche graciously accepted a request by the Quan Am Buddhist Temple in Memphis, Tennessee to attend the inauguration and opening ceremonies of this Vietnamese Buddhist temple.  The invitation and resulting trip to Memphis were kindly facilitated by Mr. Tho Luu, a long student and dharma friend of the Sakya Monastery.

His Holiness Dagchen Rinpoche was accompanied by Her Eminence Dagmokushok la and their entourage included Jetsunma Aloki la, Jetsunma Mamaki la, Venerable Tulku Yeshi la, Venerable Khenpo Jampa la, Mr. Tho Luu and myself.  On a cool Saturday morning on June 17th, we boarded our flight for Memphis with a changeover in Atlanta.  Upon our arrival at the Memphis airport, Rinpoche was greeted by representatives of the Quan Am Temple and a delegation from Vietnam who had made the trip to attend the inauguration and have an audience with Rinpoche and Dagmola.  While we checked into our hotel rooms, Tulku la and Khenpo la went straight to the temple to prepare for the fire puja scheduled for that evening.   After a wonderful dinner with the visiting Vietnamese delegation who had previously met Dagmola and His Eminence Dhungsey Asanga Rinpoche in Vietnam in 2012, we settled in for the evening within the confines of cool air conditioned rooms of the hotel. 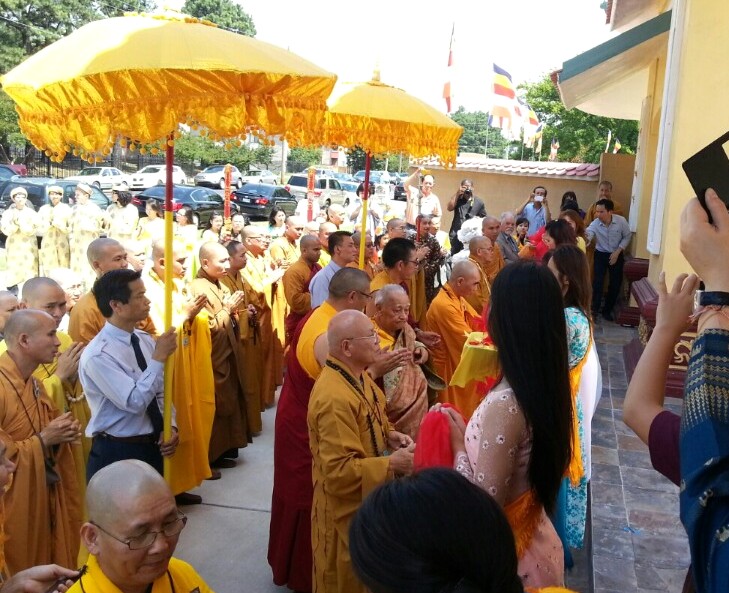 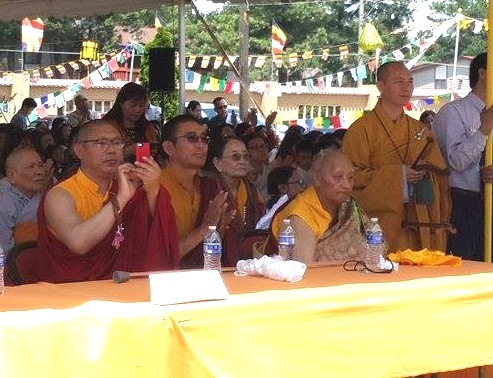 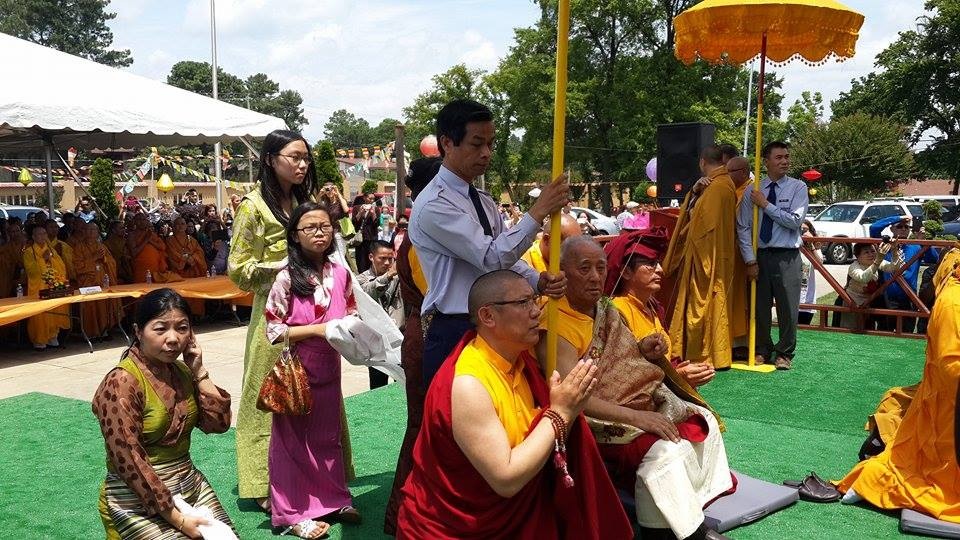 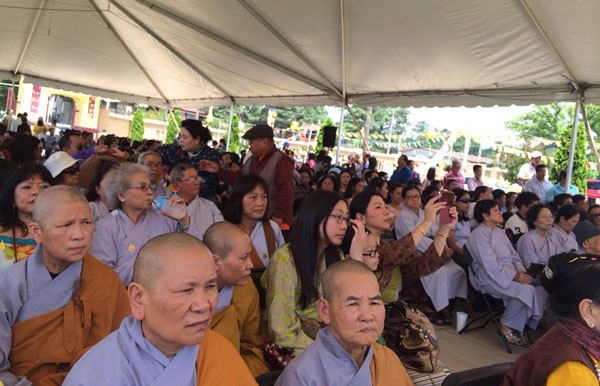 On June 18th, the day of the inauguration, a delegation from the temple arrived to escort Rinpoche and his entourage from the hotel to the temple.  Our first sight of the temple was breathtaking.  In the dry Memphis landscape, the temple stood out like a jewel in its vividness.  The streets leading to the temple were lined with many Vietnamese men and women in bright flowing robes of various hues and colors holding incense and flowers in their hands.  Within the temple, thousands of devout Buddhists had gathered to join in the opening ceremonies.  The Vietnamese sangha were also well represented by many monks and nuns in more sedate robes of orange, browns and greys.  The opening ceremony commenced with prayers both in Vietnamese and Tibetan, which was then followed by the cutting of ribbon ceremony.  Dagchen Rinpoche cut the ribbon simultaneously with a senior Vietnamese master representing the Vietnamese congregation.  The ribbon cutting was applauded with loud fire crackers and a ceremonial Vietnamese dragon dance.  Then all dignitaries were led to seats under a large canopy before the dais where a large Buddha statue sat with its head covered by a bright silk cover.  To our delight, we learnt that the statue was the famous Jade Buddha for Universal Peace.  The Jade Buddha fashioned after the Buddha statue inside the Mahabodhi Stupa in Bodh Gaya is carved out of Jade and sits on an alabaster throne.  The Buddha a symbol of world peace and harmony tours around the world so that everyone can have an opportunity to view the Buddha.  During the course of the ceremonies, the Jade Buddha was unveiled and we had the unique opportunity to view upfront and close, such a pure work of art, beauty and devotion.  The Buddha truly had a calm and peaceful effect on all those that gazed upon its serene expression despite the Memphis heat.   Rinpoche, Dagmola and the monks recited prayers in praise of the Buddha and for the benefit of all beings.  Rinpoche then blessed and consecrated the temple along with the Vietnamese senior master who performed prayers in his native language.  The conclusion of the prayers were marked by the release of thousands of colorful balloons and by the release of white doves that soared into the blue skies above. 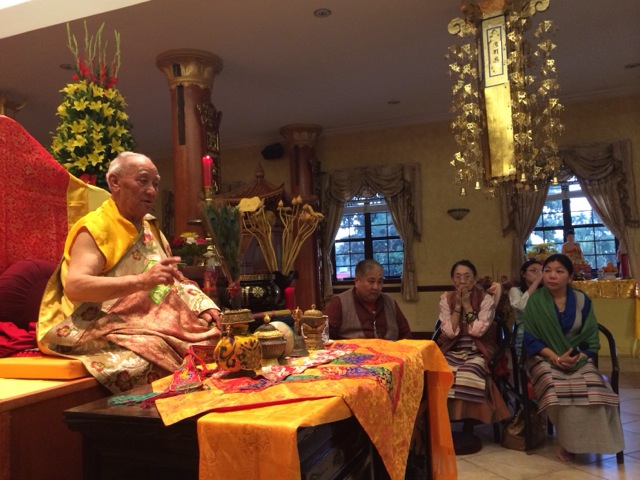 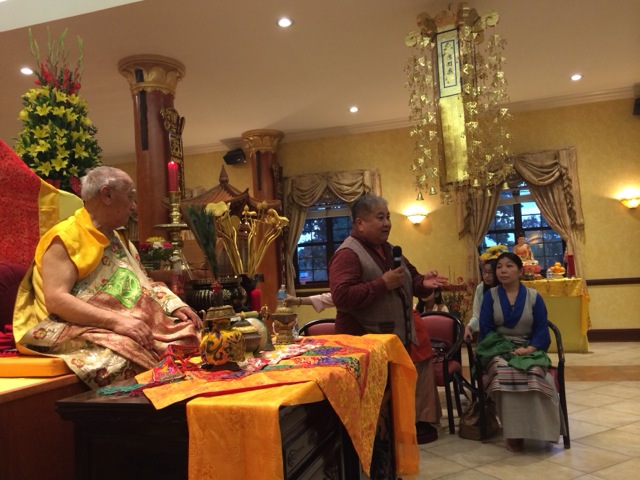 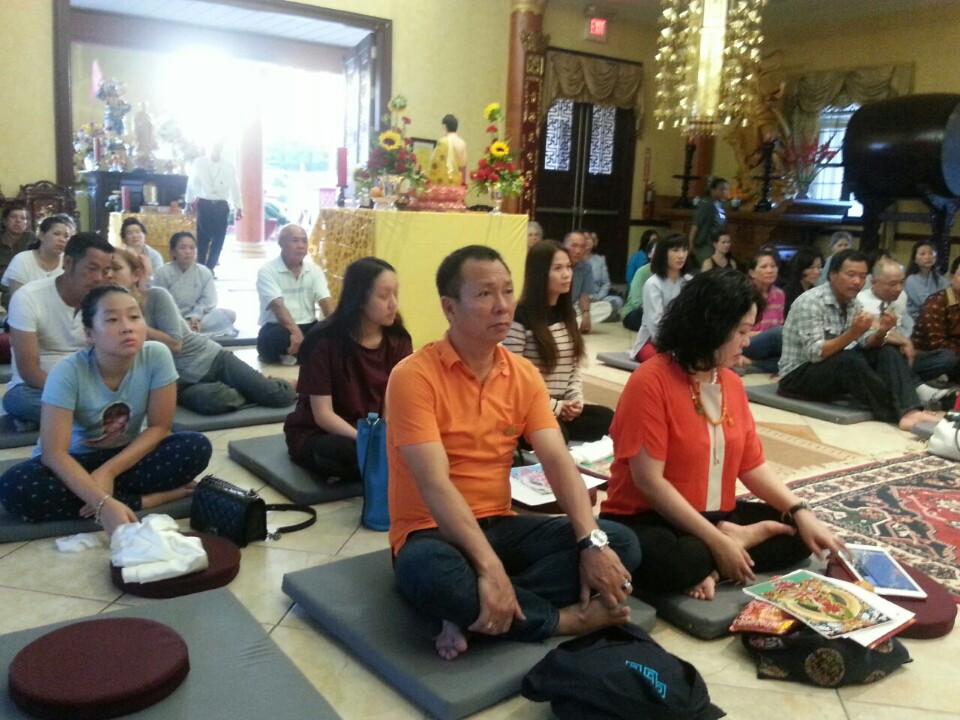 In the evening of June 18th, His Holiness Dagchen Rinpoche bestowed the Tse-ta-zung-drel (Amitayus and Hayagriva) combined initiation to the Vietnamese congregation in the main shrine room of the Quan Am Temple.  While Tulku la and Khenpo la assisted Rinpoche in the initiation preparation, I had the privilege of translating for Rinpoche from Tibetan to English.   Mr Tho Luu then translated from English to Vietnamese.  The Vietnamese sangha received the initiation with great devotion and respect.  For the majority of them, receiving a Tibetan Buddhist initiation was a novel experience as it was their first time meeting with a Tibetan lama.  By the conclusion of the initiation, Rinpoche had won over the hearts and devotion of these people as he posed for individual photos with great patience despite the lateness of the hour.  Jetsunma Aloki la and Jetsunma Mamaki la also assisted with handing out blessing cords and found that the Vietnamese Buddhists were just like us Tibetans in that we always request extra protection cords for our family members who could not make it to the initiation.  In short, it was a well-attended event and the people were very happy to have had the opportunity to receive the long life initiation from Rinpoche and learn and receive Tibetan Buddhist teachings from a Tibetan lineage holder.  As a result, they respectfully requested Rinpoche to return soon to Memphis again to give more teachings in the future.  Rinpoche and Dagmola were also very pleased to have made such a good connection with so many devout Vietnamese Buddhist practitioners.

The next day, Quan Am Temple representatives wished to host a lunch for Rinpoche, his entourage and the delegation from Vietnam.  After enjoying a wonderful meal at a Japanese restaurant, Rinpoche and Dagmola returned to the hotel to rest for the day.  The previous day had been long and taxing for Rinpoche and so he needed some rest.  Finding some free time on our hands, Mr. Tho Luu arranged for the rest of us to visit some Memphis attractions around town.  So of course we were driven to visit Graceland, the home of the famous Elvis Presley, an American icon and a musical legend. We were duly impressed with his numerous awards, his costumes and his collection of cars.  Next, we visited the banks of the mighty and historical Mississippi River.  Being a history buff, this was truly exciting.  The Mississippi River flows through ten states in the United States and its tributaries reach even further.  As we walked up and down the banks, we reflected upon the river’s significance and its impact on American history.  We were also delighted to see an original river boat docked on the side of the river.  After a delightful day getting to see the historical side of Memphis, we headed back to the hotel to settle in for the day.

On June 20th, we were invited back to the Quan Am Temple for a traditional Vietnamese vegetarian lunch.  Rinpoche rested in one of the monk quarters until it was time for us to drive to the airport.  After saying our fond farewells, we headed back to Seattle where cooler and more tolerable temperatures awaited us.

His Holiness Dagchen Rinpoche, Her Eminence Dagmokushok la, the Jetsunmas, Venerable Tulku Yeshi la, Venerable Khenpo Jampa la and I had a wonderful time in Memphis.  Our personal thanks go out to Mr. Tho Luu for facilitating this trip.  Without Mr. Tho Luu, this trip and the many benefits that resulted from it, would not have been possible.  As usual, Mr. Tho Luu went out of his way to make sure everyone was comfortable and well taken care of.  Also Mr. Tho Luu has been a long-time supporter and patron of the Quan Am Temple, and so the successful inauguration of the temple is a testament to his dedication and devotion in the Buddha Dharma.