The Dhungseys’ arrival in Seattle in the middle of winter is becoming a joyous tradition for the members of the Sakya Monastery of Tibetan Buddhism. During these visits we are treated not only to the presence of the next generation of the unbroken Khon lineage but also to their wisdom and blessings in the form of teachings and transmissions. 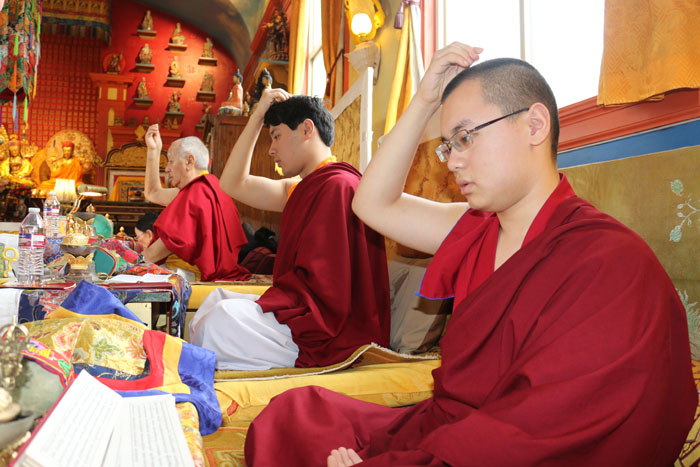 H.E. Abhaya Rinpoche came to Seattle after a month-long retreat which followed his regular intensive studies at the Dzongsar Institute in Bir, India. While in Seattle, he shared his presence and prayers at every opportunity at the Sakya Monastery and continued his studies even though on break. His Eminence continues to develop his interest in writing and we look forward to reading his insights into the Buddha Dharma as he begins to publish his work in future years.

On February 1st, H.E. Avikrita Rinpoche bestowed the “loong” (a reading transmission for prayers to Virupa and the Five Founding Lamas of the Sakya Tradition.  H.E. Avikrita reminded the recipients though, that to truly activate such a blessing requires engaging in one’s practice. After the loong, each of those present received a gift from His Eminence of a book of prayers he compiled titled Prayers to Swiftly Behold the Faces of the Gurus.

On February 8th H.E. Avikrita Rinpoche bestowed the uncommon Red Chenrezi Initiation, Lord of the Lotus Dance.  With the blessing of His Holiness Sakya Trizin Rinpoche, this initiation was given in English so as to help western students develop a clearer understanding of the initiation. His Eminence explained that Chenrezi is like the patron saint to all Tibetans and embodies the perfection of universal compassion that is not limited by discrimination or boundaries. He clarified that the Lord of the Lotus Dance is a real Buddha, not an idea but a direct realization. Because of this, by doing this practice, we cultivate benefits not only for ourselves but for all beings—something desperately needed in this world.

During the teachings which preceded the initiation, H.E. Avikrita Rinpoche emphasized the importance of non-attachment which is commonly translated to mean renunciation in the west—a word he feels falls short of its intended idea. His Eminence explains that the meaning of non-attachment in Tibetan indicates something you can trust and rise into—leaving one with a more positive sense of the concept.  He spent time expanding on this idea and its ability to remedy the growing problems brought about by the unchecked idolization of instant gratification.

The antidote, His Eminence explained, is non attachment that is cultivated by the contemplation of the Buddha’s teachings: teachings which inspire us to take responsibility for our lives and actions, teachings that help us see beyond what we experience through our 6 senses, teachings that allow us to encourage the letting go not only within the mind, but within the world. For although we have this precious human life, he explains that, “Life without the Dharma is like winning the lottery but leaving the ticket in ones pocket to be destroyed in the laundry.”

On February 15th, after the Bon Voyage Mandala Offering given in honor of H.E. Avikrita Rinpoche, His Eminence, gave a refuge ceremony to all those interested. While preparing the participants for the refuge ceremony His Eminence gave brief instructions on how to foster growth on the Buddha Dharma Path. He stressed the importance of listening properly, of practicing the Dharma and “conducting oneself towards the Dharma” at every opportunity. He advised those present to use everything within their means toward developing themselves as practitioners.  For example, when we wash something, we imagine scrubbing away our obscurations, when we are driving we imagine we are traveling towards the Buddha. In closing, he reminded those in attendance of the importance of keeping the vows taken that day. 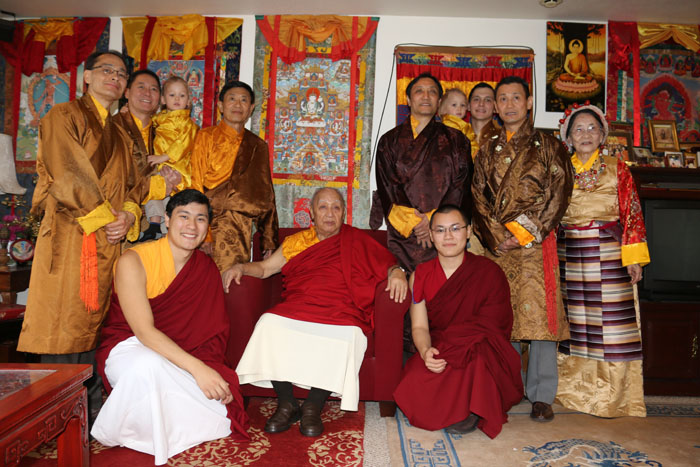 On February 19th, H.H. Jigdal Dagchen Sakya Rinpoche was joined by H.E. Avikrita Rinpoche and H.E. Abhaya Rinpoche and their family, all ordained Sangha, the Tibetan Community and Members of the Sakya Monastery for the Celebration of Losar, the Tibetan Year of the Wood Ewe. After many prayers were recited H.E. Avikrita Rinpoche gave an inspirational speech about using the start of a new year as a time to review one’s life and to renew one’s motivation and efforts towards realizing the Buddha Dharma Path. He highlighted the fact that no spiritual life can be separate from daily human life—rather it has to be woven into the fabric of everyday existence.

His Eminence also explained why cultivating the right mindset, motivation and execution of one’s intentions is so important to the world. He said that human rights and equality for all are inherently related to the attainment of enlightenment. He stressed that the Dharma is so much more than an adjunct stress reducer; it has so much potential—potential to awaken something within one’s self that can be of real value to the world. He also gave heartfelt thanks to all of the great masters and practitioners who, with great diligence, sacrifice, and herculean efforts kept the teachings alive in the face of great adversities that began in the last century. Because of them, he explained, the teachings, the Precious Jewel will, “not just be another exotic cultural side note archived in the annuals of history but rather a thriving force to bring about benefit to all sentient beings”.  The day after the Losar celebrations, H.E. Avikrita Rinpoche left Seattle to return to his studies at the Dzongsar Institute in Bir, India.

On Sunday February 22nd, members of the Sakya Family and Sakya Monastery offered H.E. Abhaya Rinpoche a Bon Voyage Mandala Offering.  After enjoying a few final days with his loved ones, he, like his brother, returned to his studies in Bir, India. We wish the Dhungseys all the best in their educational endeavors and we look forward to next winter when they will once again brighten our short winter days with their luminous presence.

We are forever grateful to H.H. Jigdal Dachen Sakya for his tireless efforts to help the Buddhist doctrine prosper in this land so far from where he was born. We are grateful for his perfected example of altruism, dedication, and wisdom which he has shared with so many and which now lives on in his grandchildren who we hope will also motivate and inspire generations to come. For all of those who made the Dhungseys’ visit possible, and for H.E. Avikrita Rinpoche’s and H.E. Abhaya Rinpoche’s own generosity of spirit and depth of wisdom and compassion we are grateful.  May our gratitude blossom into clear intention and perseverance so that we might come to embody all of the blessings we receive because of the blessed Khon Lineage.