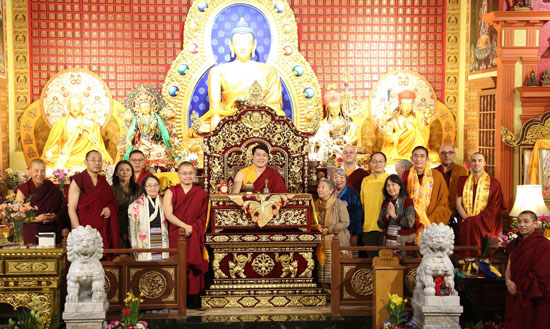 It has become a much-anticipated tradition for the Dhungseys to visit Seattle during their university’s winter recess. Both are attending Dzongsar Institute in Bir, India, where they are engaged in rigorous studies of the varying aspects of the Buddha’s teachings. Even though the visit took place during their break, the Dhungseys, as usual (and in true bodhisattva fashion) gave tirelessly of themselves in order to bring benefit to others.

On February 12th, H.E. Avikrita Rinpoche and H.E. Abhaya Rinpoche arrived at the Sakya Monastery of Tibetan Buddhism an hour before the scheduled Sunday Chenrezig practice in order to spend time with the youngest members of the Monastery. Children from the Sunday Dharma School spent time with both of the Dhungseys in a relaxed environment, talking and working together to create origami. On the same day, after Chenrezig practice, Avikrita Rinpoche offered a refuge ceremony.

A few days later, H.E. Avikrita Vajra Rinpoche bestowed the initiations of the Six Dharmas of Vajrasanapada over a three-day period, starting on February 18th and lasting through the 20th. The teachings began with a preliminary teaching given by H.E. Abhaya Rinpoche, focused on the importance of creating the proper state of mind before taking part in the initiations (or any similar Vajrayana practices).

H.E. Abhaya Rinpoche reminded us that as Vajrayana practitioners, we must consider the suffering not only of ourselves and those we love, but of all sentient beings. He reminded those present that the Mahayana is called the “greater vehicle” because it asks its practitioners to consider the greater goal of enlightenment for all, rather than the liberation of just oneself.

He explained that although all beings are good by their nature and hold within themselves the seed to become enlightened, not all will have beneficial circumstances in which to practice the Dharma. Many experience obstacles that prevent their spiritual development including; bad habits/defilements, negative associations which lead away from the path, deprivation or being led from the Dharma, and/or being oppressed so that they cannot access the Dharma. For others, they won’t even have had the great good fortune to attain a human birth. Even for those who have had the good fortune of a human birth, there are many who do not understand the laws of karma, the true nature of impermanence, or the reality of the pervasive suffering of samsara.

H.E. Abhaya Rinpoche’s reminders helped elucidate the great opportunity that lay before those present. His Eminence explained that Shakyamuni Buddha taught that purification is the result of one’s conduct, not one’s birth. Therefore, we must nurture our inner goodness and recognize the need to work to overcome defilements rather than feed them and make them stronger. He counseled those present to develop a sense of urgency about releasing oneself and others from samsara, noting that in every single moment there lies the opportunity to practice the Dharma for the sake of all beings.

After H.E. Abhaya Rinpoche’s preliminary teachings, H.E. Avikrita Rinpoche began the instruction on the practice of Marici (the Goddess of Dawn) the first of the Six Vajrasanapada practices. He explained that these practices comprise a rare set of teachings within the Sakya traditions and were brought to Tibet by the great translator Bari Lotsawa, who later gave them to Sachen Kunga Nyingpo (the first of the five founders of the Sakya tradition).

H.E. Avikrita Rinpoche shared that the Marici practice was used with great results by many Sakya masters for centuries, and has offered vital protection on the path. He also expressed dismay over the fact that such a singularly effective method for pacifying outer obstacles is not more well-known and strongly hopes for its revival within the Sakya tradition.

H.E. Avikrita Rinpoche reminded us that, while in samsara, it is possible to experience occasional moments of happiness, although these moments are fleeting and impermanent by their very nature. However, Arya Marici represents true, unrelenting bliss. He shared that the introduction of Marici to the world came from Shakyamuni Buddha himself and can offer profound help by removing outer obstacles as well as discordant emotions such as anxiety, stress, fear, and anguish. H.E. Avikrita Rinpoche said that even just by knowing her name, one’s problems could be pacified.

However, H.E. Avikrita Rinpoche cautioned those present that the key to success while engaging in her practice (as well as all Vajrayana practices) is the cultivation of true bodhicitta. In contrast, when we only think of our own benefit, or the benefit of those we love, we will not be able to unlock the power or blessings of such practices.

The second initiation bestowed by H.E. Avikrita Rinpoche was of Blue Acala (also known as the Immovable One) in the kneeling form. H.E. Avikrita Rinpoche shared that Bari Lotsawa told Sachen Kunga Nyingpo that he needed wisdom to succeed in his spiritual endeavors and said the best way to cultivate such wisdom was through Acala’s practice (a profound endorsement of this practice indeed). Consequently, this practice was used by the Sachen Kunga Nyingpo to overcome obstructions during his first retreat. Blue Acala, he said, is the foremost in defeating Mara (the archetypal force of negativity) and offers profound efficacy in clearing away inner obstacles. By reciting daily just one mala of his mantras, one can overcome the most serious degradations.

At the start of the second day of the Vajrasanapada teachings H.E. Avikrita Rinpoche gave teachings on the Long-Life Buddha at the Bodhi Tree practice. The Bodhi Tree in Bodh Gaya India was where Shakyamuni Buddha manifested perfect enlightenment and his blessings, streaming through this unbroken lineage, remain available to practitioners today.

H.E. Avikrita Rinpoche began this part of the teaching by sharing that he is often asked what the idea of the Buddha actually means. He explained that in Tibet, the word for Buddha is Sang-gye. The first syllable of the word means to purify all that needs to be purified, and the syllable ‘gye’ means to develop all that needs to be developed. Therefore the Buddha, he said, is ‘one who possesses the two kayas, or wisdoms.’ The first is the Dharmakaya—primordial purity—an expression of clarity and voidness as inseparable. The second is the Rupakaya and has two aspects, the Sambhogakaya—an expression of the complete enjoyment body arising through immense accumulated merit, and the Nirmanakaya—an emanation body that arises in Samsara to help ripen and liberate wandering beings.

H.E. Avikrita Rinpoche also emphasized that specific manifestations of the Buddha’s energy, i.e. wrathful, female, male and so on, should not be regarded as different in nature (less than or greater than). The variety of manifestations have to do with our disposition rather than the actual nature of that enlightened energy. He also cautioned that we should not view the Buddha as our omnipotent god but rather we should correctly see him as our teacher. And although he can point the way, we must walk the path.

The fourth initiation/teaching given by H.E. Avikrita Rinpoche was on Buddhalocana (the Goddess of the Buddha’s eyes). Her practice is considered to have profound healing power. He acknowledged that for some in the West, there might be feelings of skepticism about the ability of a mantra or meditative practice to heal disease. However, he reminded those present that there are different kinds of medicines, some that tend to the outer issues (the physical) and some that address the inner issues (the mind). He explained it is important to keep in mind that even though they may appear unrelated, outer afflictions are in fact expressions of inner afflictions. This is why it is so important to get at the root issues of each illness. He cautioned that the aim of such healing practices is not to look for a panacea but rather to create conditions in which one can live long enough and well enough to be of help to others.

The fifth initiation given during the Six Dharmas of Vajrasanapada teachings was on the Three and a Half Syllable Avalokita mantra, a practice to help in the development of undisturbed sleep as well as cultivating peace, longevity, and healing. When speaking of the importance of Avalokiteshvara, H.E. Avikrita Rinpoche immediately referenced his precious grandfather, the founder of the Sakya Monastery of Tibetan Buddhism in Seattle, H.H. Jigdal Dagchen Sakya Dorje Chang. He shared that at the last meeting between his grandfather and H.H. Sakya Trizin, he carefully studied the interaction and exchanges made by these extraordinarily precious teachers. One of the things that struck him most deeply (while witnessing the beautiful and special way that they interacted with one another) was when his grandfather shared that one of the things he was most grateful for in his life was having been able to introduce so many beings to Chenrezig.

On the final day of the teachings H.E. Avikrita Rinpoche bestowed the last of the six sacred Vajrasanapada practices, Trisamayavyuha or the Buddha Establishing the Three Vows. This practice allows initiates to purify negativities that might otherwise hinder spiritual practice or the ability to maintain vows. He explained that these six deities comprise the essence of practice—six aspects that we need to focus on when mediating and practicing sadhanas. We should also keep in mind that the tutelary deity is the sum of these six deities.

He emphasized that it might feel overwhelming at times, working with the gross mind to gain wisdom, but he encouraged his students not to give up. He said that if we just apply ourselves even a little, it can cause profound effects which lead us ever closer to our Buddha nature.

Only a few days after the completion of this retreat, H.E. Avikrita Rinpoche and H.E. Abhaya Rinpoche performed a special Sakya version of the Mahakala puja on February 25th. Mahakala is the protector deity of the Sakya Monastery and although those without his initiation are typically unable to attend his practice, on this special occasion they were allowed to be present.

On the following day, H.E. Avikrita Rinpoche gave a Chenrezig initiation, the very expression of the quintessence of the Buddha’s compassion. The children of the Dharma School were invited as his special guests for this initiation, where he expounded on the importance of developing bodhicitta for the sake of all beings. The initiation was followed by a farewell potluck for the Dhungseys who returned to India (and their studies) on the 1st of March.

As students of the Buddha Dharma, we might be inclined to fantasize about what it might have been like to be in the presence of Shakyamuni Buddha over 2500 years ago, marveling at the great good fortune of those who gathered around him to directly receive the benefits of his unparalleled teachings and blessings. However, we should also marvel at our own great good fortune, our ability to gather around those who (through an unbroken lineage) allow us to have continued access to the Buddha’s profound blessings and instruction. We might mistakenly think that because this access is available now, the same circumstance will always exist. However, as the Buddha so eloquently taught, impermanence is an inherent part of existence and therefore we never know when our life will end or when our access to such teachings and teachers might be interrupted.

With this in mind, we can deepen our appreciation of not only our precious gurus, but of all of those of the Sakya lineage (and all ordained sangha) who have given so tirelessly of themselves that we might have this precious opportunity to liberate ourselves and others from the relentless suffering of samsara. It is truly impossible to conceive of, or show gratitude equal to the efforts that have been made on our behalf, but we do have something to offer in return—the cultivation of bodhicitta and our determination to practice with great dedication and devotion until we finally become like those who have shown us such boundless compassion.