The word for “Thank You” in Vietnamese is “Ca’m o’n pronounced “kom on”. I used this word often during my visit to Vietnam. The Sakya Vietnam Center members under the direction of Mr. Tho Luu and Ms. Hong, President of the Center gave Ani Rinpoche, Jetsunma Aloki, Jetsunma Mamaki, Dagmo Chimey and myself an incredible VIP reception when we arrived at Saigon airport on December 30, 2018. Dagmo Chimey and I each received huge bouquets of orchids. The weather was a balmy 88 degrees. We were all excited to be in Ho Chi Minh City/Saigon because the next day we would be welcoming His Eminence Khondung Asanga Vajra Rinpoche.

A little history about the Vietnam Sakya Center: A few decades ago, His Holiness Jigdal Dagchen Dorje Chang and his devoted student, Tho Luu discussed the establishment of a dharma center in Vietnam. H.H. Dagchen Dorje Chang sanctified this agreement in 1995 and gave the center a Tibetan name, Sakya Tsechen Shiday Choling aka Sakya Vietnam Center. Subsequently, on several occasions Tho Luu tried to secure Dagchen Rinpoche a special visa to visit Vietnam and the center. However, those attempts were always denied by the government. Dagchen Rinpoche then decided in 2012 to send as his representatives, his grandson, Asanga Vajra Rinpoche and his wife, Dagmo Kusho to Vietnam. Lama Tashi Rinpoche from Taiwan and Lama Migmar, resident lama from Sakya Monastery accompanied them and together they went to Vietnam to consecrate Sakya-Vietnam Center’s property for the creation of the Long Tho Cremation Park. Long Tho Cremation Park would have on its site a Crematorium/Prayer Hall and also a prayer Temple for the Sakya-Vietnam Center members. During the Vietnam War, this area was a battlefield where hundreds of thousands of North and South Vietnamese, Americans and soldiers from other Asian countries and civilians lost their lives. Now, with the blessings from H.H. Dagchen Dorje Chang, H.H. the 42nd Sakya Trizin Rinpoche who visited in 2017 and H.E. Asanga Rinpoche (2019), it has been transformed from a place reminiscent of the devastating consequences of war to a blessed environment.

On December 31, 2018 H.E Khondung Asanga Vajra Rinpoche and entourage arrived at Saigon airport, Ho Chi Minh City. He was greeted with a VIP reception and a large “welcoming” banner. 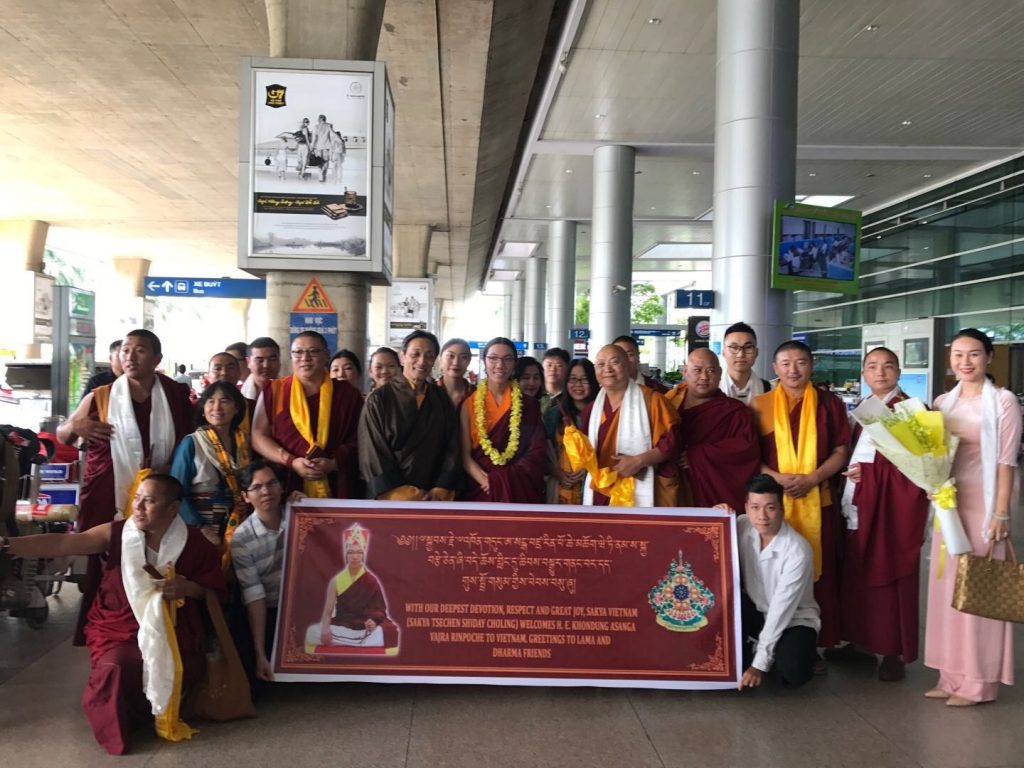 Another “welcoming” event occurred at sunset time on that very day. Peering out of my hotel window, I saw auspicious “khatag” clouds! (clouds in auspicious scarf- like formations) They were beautiful. 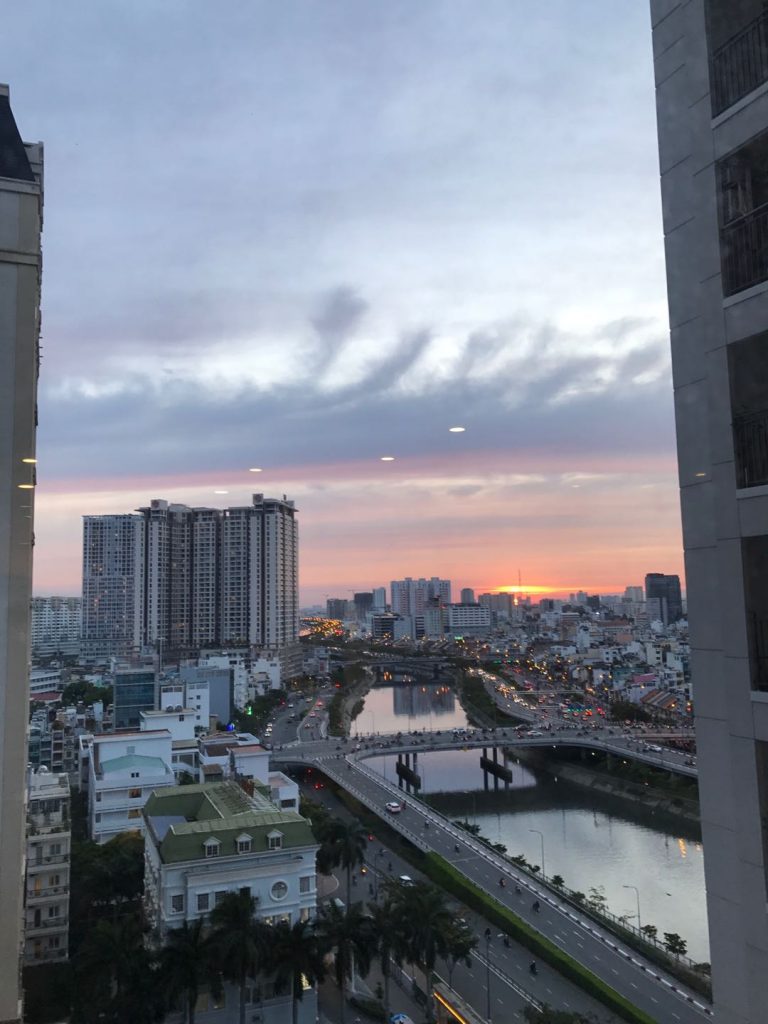 That evening, Asanga Rinpoche, his family, Khenpo Jampa Rinpoche and the remaining entourage were all invited to a delicious dinner at Ms. Hong’s famous vegetarian restaurant, “Hum Vegetarian Restaurant and Garden”. We had dishes like sautéed mushroom with wild betel leaf, sweet potato in spicy sauce, fresh ginseng and apple pot. At the end of the New Year Eve’s meal, Asanga Rinpoche was requested to usher in the New Year 2019 by opening a bottle of champagne.

On January 1, 2019 Tho Luu and the Center members took us on a sight-seeing tour of Ho Chi Minh City. Ho Chi Minh City is quite modern, full of cars and many, many scooters, in fact a sea of scooters! Do you dare to cross the street by yourself? FYI, they also have “Uber” or rather “Grab” or Grab bike scooter drivers, identified by their green shirts and helmets. In the city, we saw French Colonial style landmarks built in the 19th century—the Notre Dame Cathedral and their Central Post Office, which is in use even today. We also visited two museums a War museum, which housed war planes and a historical museum. In the historical museum, we learnt about the ancient bronze drums created by their ancestors around 600 BC. While on our walking tour, the guide noticed a rainbow around the sun (unusual to him). We all stopped and took pictures but to us Seattleites, we knew that this was H.H. Dagchen Dorje Chang’s signature blessing. 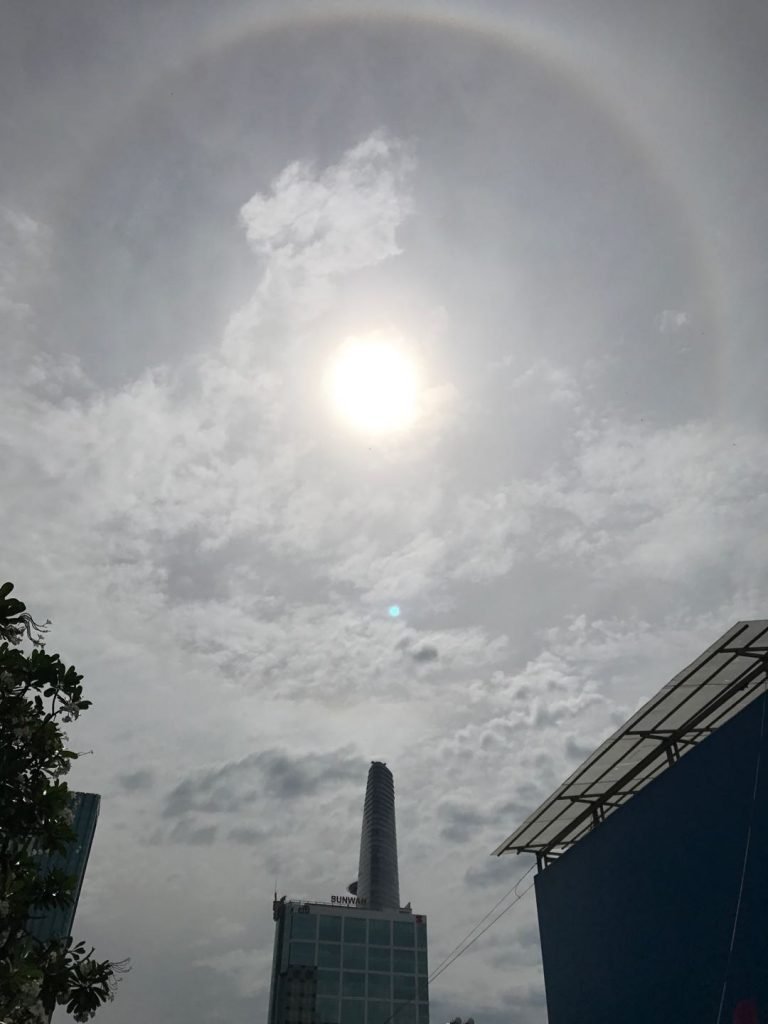 Incidentally, Vietnam was controlled by China for 1,000 years and by the French for 100 years. Through the creative genius of the Vietnamese people—they have integrated both cultures with their own. This is especially recognized in their food. Vietnamese cuisine is delicious and incredible. Their food is delectable, exotic, scrumptious and artistic creations—yum!

Additionally, the Vietnamese people are so kind and generous. I saw no resentment towards Americans nor towards any other foreigners. It is a developing country on the fast track. 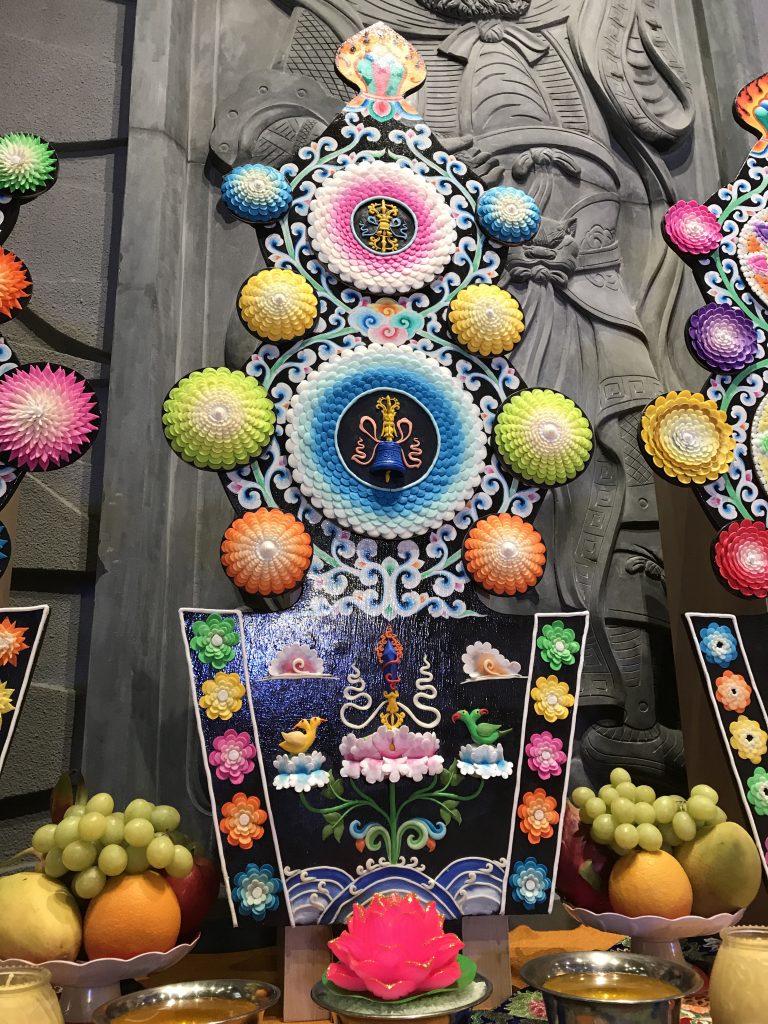 At around 9am on January 2nd, Asanga Vajra Rinpoche arrived at the Long Tho Cremation Park/ Sakya-Vietnam Center site. Before entering the compound, he cut a ceremonial ribbon opening the gates to the new Temple. Upon entrance, a traditional Tibetan welcome for a high lama—umbrella, incense, gyalings, cymbals, drums and faithful students holding khatags greeted Asanga Rinpoche and his family: Ani Rinpoche, Jetsun Aloki, Jetsun Mamaki and Dagmo Chimey.

The Instatement Ceremony of HE Asanga Rinpoche as the Head Lama of the Sakya- Vietnam Center included a Long Life Tenshug ritual, Offerings of Seven Emblems by Geshe Kalsang Damdul, former Principal of the Buddhist Dialectics Studies in Dharamsala, India, offering of Eight Auspicious Symbols by Khenpo Ngawang Gyatso, abbot and principal of Rimbick, College, India and Mandala offerings from Tho Luu, Khenpo Jampa Rinpoche, the Sakya-Vietnam Center and Sakya Monastery, Seattle. Speeches then followed: a welcome speech by Ms. Hong, President; of the Center, the reading of congratulation letters from HE Dagmo Kusho, Sakya Phunsok Phodrang, Seattle and Dajeeling Guru Sakya Monastery, India. Lastly,there was a speech by Venerable Thich Minh Vu.

In the afternoon, HE Asanga Rinpoche bestowed to all in attendance (400 people) Chenrezig and Mahamudra Combination initiation. The initiation was translated from Tibetan to Vietnamese by a young Vietnamese woman named Tenzin Pema. Pema has been studying Tibetan language at an Institute in Dharamsala, India for the past 5 years. At the conclusion, of Asanga Rinpoche’s visit, Pema returned to India to resume her studies.

On Janurary 3, 2019 Asanga Rinpoche presided over the ceremony for the auspicious installation of H.H. Dagchen Dorje Chang’s holy relics into the Parinirvana Stupa. 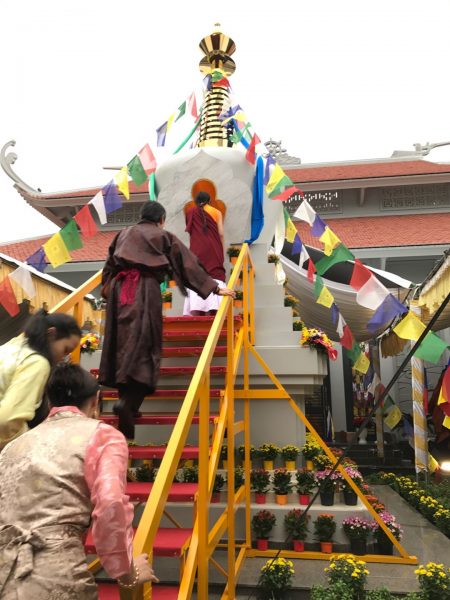 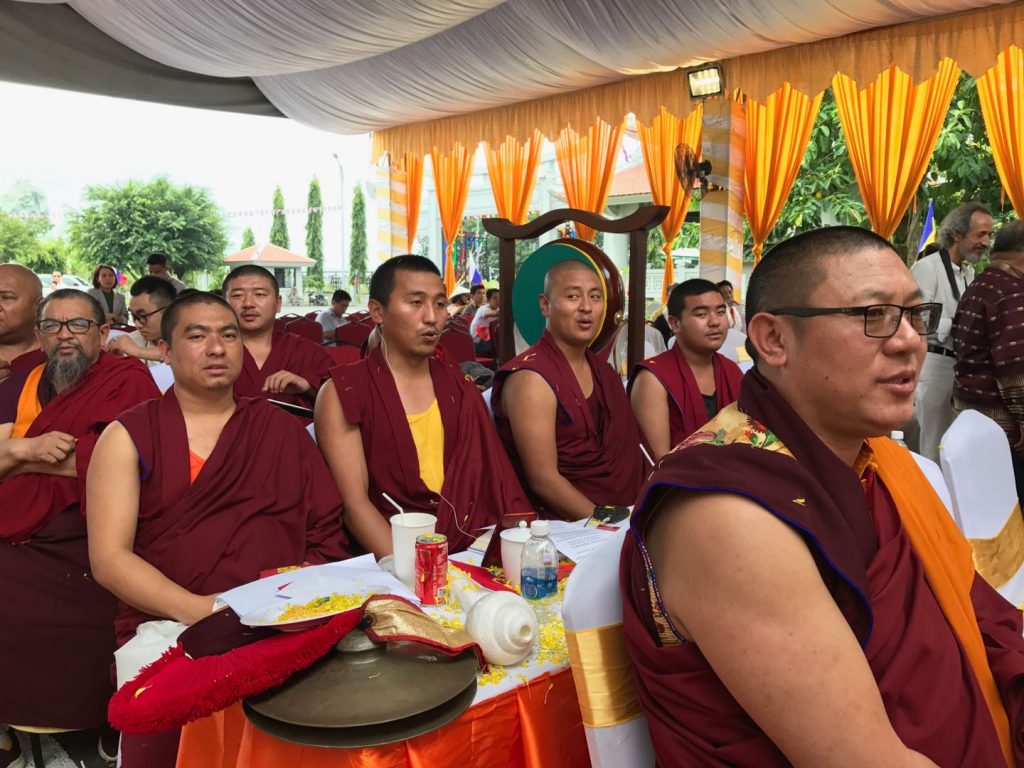 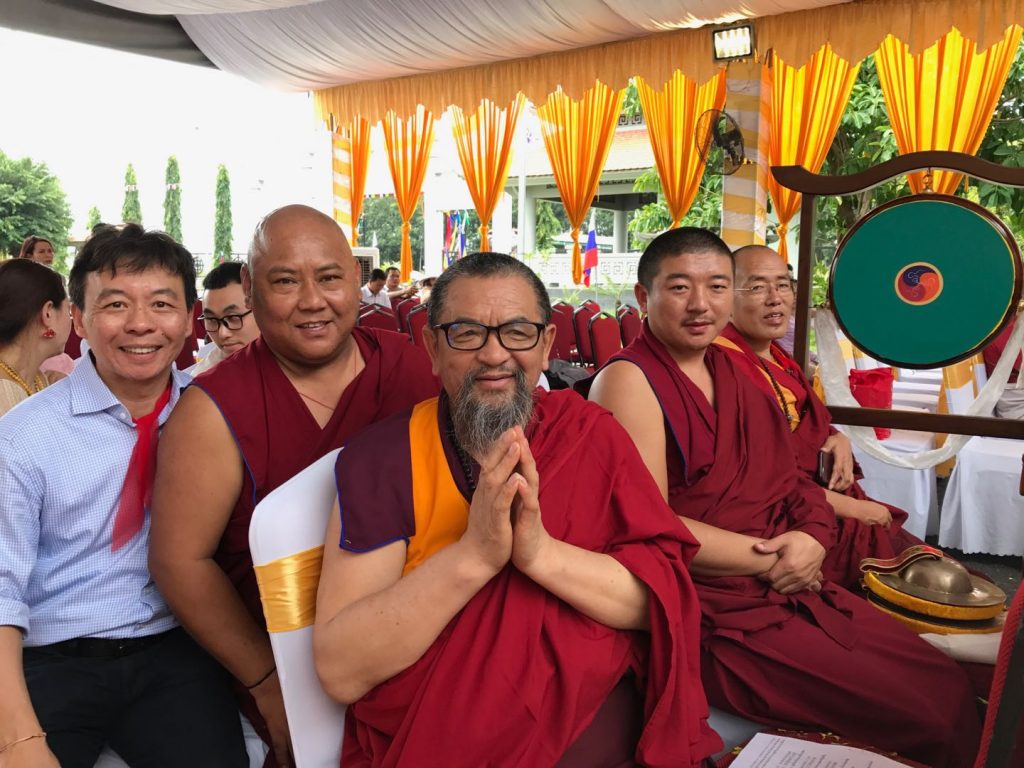 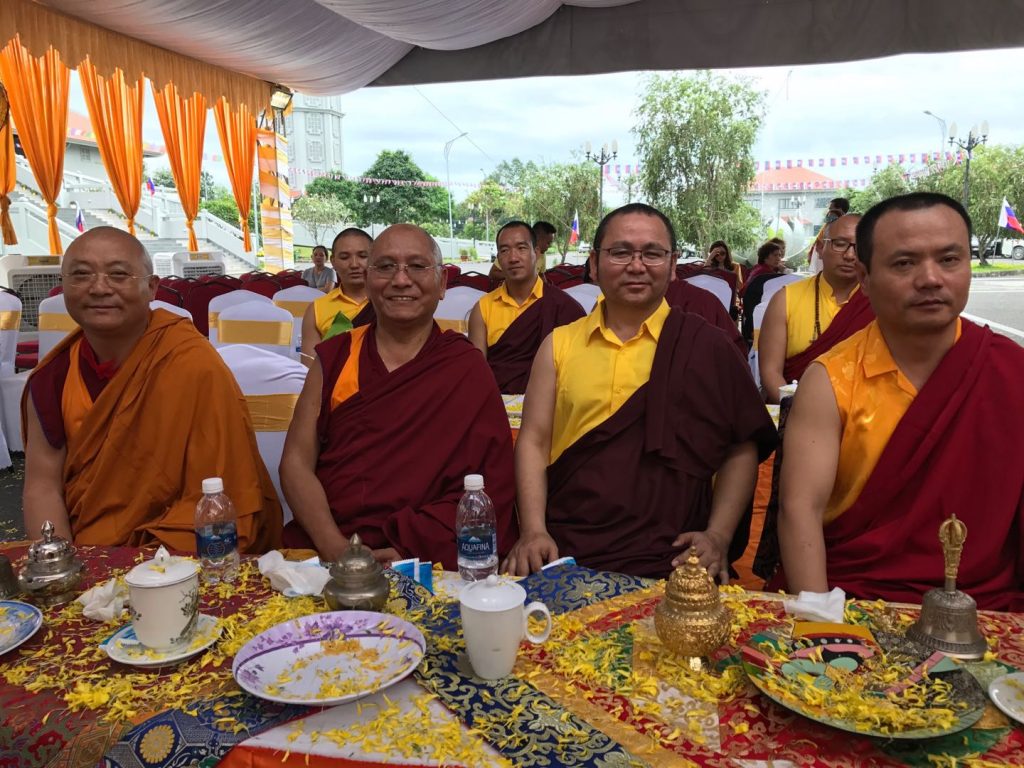 The next day at the Crematorium/Prayer Hall site across from the new Temple, a Mahavairochana or Kunrig puja was held. The event was presided over by Asanga Rinpoche and Khenpo Jampa Rinpoche led as Dorje Lopon. Kunrig is an elaborate prayer service especially beneficial for the deceased.

On January 5, 2019 at the same location, Crematorium/Prayer Hall, Asanga Rinpoche presided over the Vajrapani Bhutadamara Fire Puja for removing obstacles. A huge fire pit was created for this ceremony. Asanga Rinpoche offered ladles full of oil throughout the puja and everyone else participated by offering—mounds of various kinds of grains, grasses, seeds and other fire puja substances.

In the afternoon, Asanga Rinpoche, Ani Rinpoche, the Jetsunmas, Dagmo Chimey, Khenpo Jampa and I went back to Ho Chih Minh City. We met Ms. Hong, Tho Luu and the rest of the members in a newly purchased apartment. This place is the “local site” for the Sakya-Vietnam center members to practice. This apartment is closer than the Long Tho Cremation Park Temple, which is a 1.5 hour drive away from the city. Asanga Rinpoche gave a long discourse on the meaning and merits of taking refuge which was translated by Pema. Rinpoche also gave refuge to several students initiating them to the path of becoming a true Buddhist.

The following day, we all (at least 50 people) went on a Fish release. Huge bags of fish were released into the waters of the Saigon River outside of the harbor. It was a good feeling to be able to do something like this the first week of the 2019 New Year.

Well, all good things come to an end—on January 7, 2019 HE Asanga Rinpoche and his attendants Gen Nyima and Sopon Tashi Tenzin returned to India along with the monks of Guru Sakya Monastery. However, we hope to see them again in July, 2019 for Sakya Molam, Seattle!