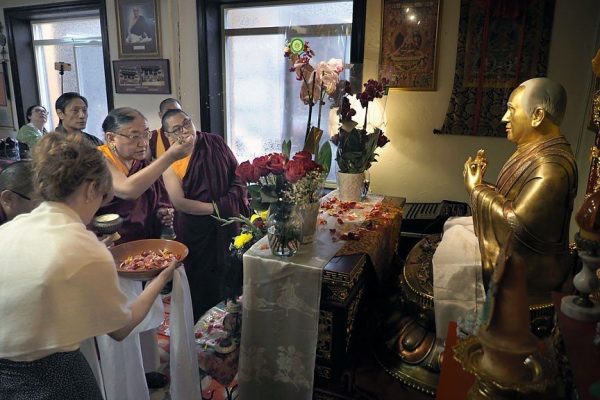 His Holiness the Sakya Trichen consecrates one of the statues of H.H. Jigdal Dagchen Dorje Chang in the Monastery Cultural Hall (aka downstairs Shrine Room).

Each statue was perfectly designed according to Sakya tradition and planned according to His Holiness’ exact measurements. H.H. Jigdal Dagchen Dorje Chang sits upon a lotus in each statue. According to tradition, High Lamas who have reached parinirvana sit on top of a lotus in any future representation or likeness. The statues are adorned with actual personal items of HHJD Dorje Chang’s: hats, clothing, shoes and glasses. 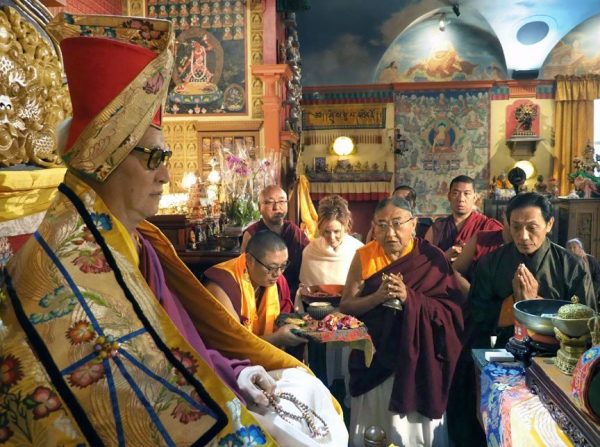 Statue of His Holiness Jigdal Dagchen Dorje Chang being consecrated by His Holiness the Sakya Trichen, August 2018

The consecration ritual is very important. There are different types of consecration: land, temples, houses, statues, thangkhas, all Dharma objects, and representations of Buddhas, Bodhisattvas, and Gurus. Before something is consecrated, it can hold impure negativities. The ritual includes preparations such as offerings, prayers, and purification.

For a statue that has an inside cavity or is hollow, the items that are placed inside are specialized and scripted, and known in Tibetan as “zhung shu.” Special ingredients and holy relics are carefully placed according to a strict tradition. In the consecration of His Holiness’ statues, the most blessed objects were part of the Zhung shu; and the ritual was performed by the highest Lama in the Lineage: His Holiness the Sakya Trichen.

When a statue of a high Lama is prepared, the body, speech, and mind qualities of that Lama are placed, or “brought,” inside the statue. Once everything is put in perfectly and sealed, prayers for protection finalize the consecration. This process was used to consecrate all three likenesses of H.H. Jigdal Dagchen Dorje Chang. Now that the ritual is complete, H.H. Dagchen Rinpoche is “There” in each statue.

Once consecrated, the statue remains in a holy state until the four elements disintegrate, or until the end of an eon. The blessedness cannot be destroyed. For example, a consecrated statue of Lord Buddha remains “Lord Buddha” until the elements of fire, water, air, and earth dissolve at the end the eon. 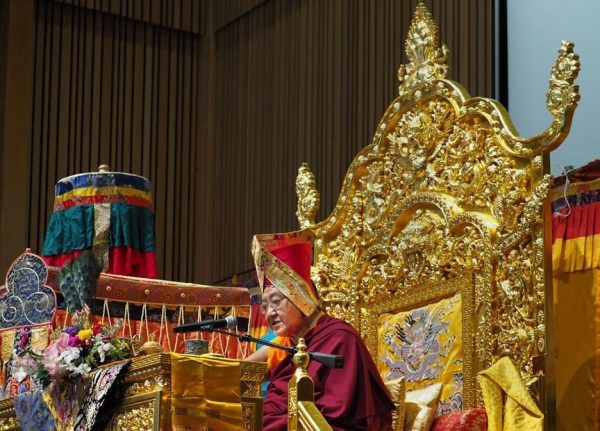 The two day Chakrasamvara empowerment took place at the new Nordic Heritage Museum in Ballard during the auspicious waxing moon phase. Hundreds of people attended each full day. The first day began with quiet meditation and welcome speeches by Khenpo Jampa and Adrienne Chan. H.H. the Sakya Trichen gave a brief teaching about the types of paths such as Hinayana, Paramitayana, and Mantrayana, and a description of the different classes of tantra. He spoke of how the nature of an empowerment is to ripen disciples. Every being has Buddha nature, and that human beings have the best opportunity to practice due to living in a better place, having a better body, and having time to practice. He added that human beings experience many sufferings and that these experiences can further inspire one to practice Dharma.

The final day of the Chakrasamvara initiation concluded with mandala offerings by Sakya Phuntsok Phodrang, Sakya Monastery Board, Tibetan Association of Washington, and several sponsors.