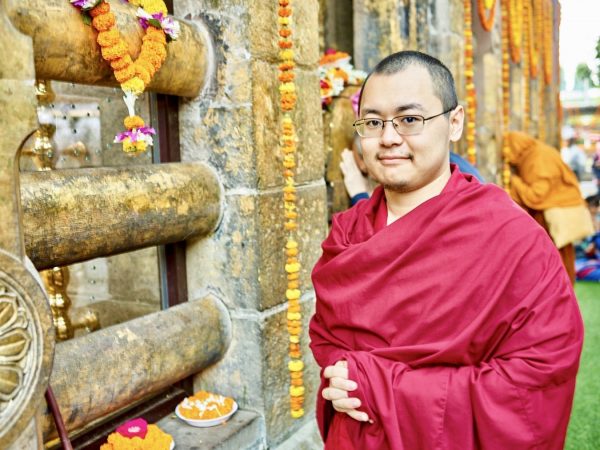 In January 2019, Chris Rebholz had the good fortune to interview His Eminence Sakya Khöndung Abhaya Vajra Rinpoche.  He is the grandson of His Holiness Jigdal Dagchen Sakya Dorje Chang and Her Eminence Dagmo Kusho Jamyang Sakya and has taken monastic vows.  He is currently completing his training in India. Excerpts of the interview follow.

Chris Rebholz (CR): In the last three years, the sangha in Seattle started to get to know you and your brother and cousin because of how graciously you helped with the rituals as Dagchen Rinpoche entered parinirvana.  What has happened in the last three years, since the three of you [grandsons] are now more involved in running the Sakya school?

His Eminence Abhaya Rinpoche: For the past four years, I have been studying at Dzongsar, studying the texts and philosophies of ancient Buddhist and Tibetan masters.  There are five subjects, such as the Madyamaka, the middle path teachings on emptiness, and epistemology. There is also vinaya, the discipline codes [for monks and nuns].  There is also the prajnaparamita, the text on wisdom and knowing. There is also abhidharma, which is about understanding and categorizing the different things in the universe.

H.E Abhaya Rinpoche: Yes!  (laughter) Actually this year, we just studied abhidharmakosha, which explains the different things categorizing and explaining how things work, like karma to the world, to the mind – all kinds of things.  It was also the year that we studied text.

CR: What year in your training are you currently?

H.E Abhaya Rinpoche: I am in my fifth year.  Next year I will be going into vinaya.

CR: Clearly these are advanced studies.  When you think about the West, would this be college  level? Graduate level?

H.E Abhaya Rinpoche: Actually, I’m not familiar with how it goes in the West.  But they refer to it as higher studies of Buddhism. After probably the next year, it grants me a degree.  Then after eight years, there is another degree.

CR:  In Asia, people start in monasteries at a young age.  What do all of those years of training look like? When you start as a small child, what are the sorts of things they teach?  What would be their primary education, the equivalent of kindergarten through twelfth grade?

H.E Abhaya Rinpoche: It varies within different traditions.  For us in the Sakya tradition, when they’re young – novice monks – they go into the monastery and they start learningTibetan language and grammar.  They will focus on rituals – memorizing, saying prayers and rituals. After they come to the Vajrakilaya ritual, by then they will be in their 20s. Then they go to the college, where they have philosophy studies.

CR: It sounds like the early years are here’s what to do, and after that, it’s why you do.

H.E Abhaya Rinpoche: Exactly.  It is the tradition of how it goes.  Sometimes I question that.

H.E Abhaya Rinpoche: When we plan to become ordained, we first start as novice monks or nuns.  When the Buddha taught about that – it was funny how he explained it – he said that you should take the vow once you’re old enough to know what you’re doing.  In Tibetan Buddhism, it becomes a tradition for their parents to send their children to become a monk or nun before the child knows what they are doing, and they think it’s a casual, normal thing.  It almost becomes a worldly activity for them. Normally, when we take the vinaya – the vows – there are four major vows that we have to keep. There are many vows, but if we violate these four, there’s probably a downfall.  There’s killing and stealing. There’s also lying, especially of supernatural abilities, to make yourself look big. Then there’s sexual intercourse. Those four would cause you to be disrobed.

For novices, there are six other vows that we practice.  At the age of 20, we’re allowed to become a bhikkhu [Pali], or bhikshu [Sanskrit].  Then we actually become part of the sangha; when you’re a novice, you’re still training to become a senior monk.  When you’re a senior monk, they say you’re wearing the Buddha’s skin, because that’s when you’re actually living the Buddha’s lifestyle – pure and blameless.  We’re living the guidelines of how to live. When we follow these rules, we learn that they are more of a protection against acting upon our afflictive emotions, like desire and anger, rather than seeing them as chores.  They’re helping us on the path.

CR: You’ve been around the monastic traditions long enough that it’s your life.  I’m curious; clearly, I’m going to guess that people have to study for a while before they decide to become a bhikshu or bhikshuni.  What do you believe causes people to decide yes or no? Clearly, there’s your experience. What is the thought process?

H.E Abhaya Rinpoche:  A lot of times with the Tibetans I know, I hear that when people start to learn the Buddha’s teachings, like the Four Noble Truths, they realize that there is the cause of suffering and a cessation. When you learn these things, you realize that participating in Dharma is the way to be liberated. When you become a monk or a nun, you start to focus on putting your whole life on that path.  You decide that you don’t have to suffer and work with samsara and have to accept it. Instead, you completely focus all your energies on spiritual development.

A lot of times I notice that people come from that kind of sense of disenchantment with samsara.  A lot of people who I notice become monks and nuns start with that. They tire of their life. They realize and are aware of the pointlessness and emptiness of living, so they wish to commit their lives to the Dharma.

CR: Do you find that’s true of people in their early twenties that are making the choice, as well as with people that are older?

H.E Abhaya Rinpoche:  I do. Mostly it’s young people I know.  But it’s never too late to become a monk or nun.  Recently there was an old tulku – I think he was in his  70s or 80s – and he just became a novice monk.  So it’s never too late.

CR: I think it’s common regardless of what culture you’re from, that as you age you become more spiritual.  Death becomes more prominent in your life. How is the path different when you get serious about it when you get older, instead of something you’ve known about for a long time?  I would guess you might see that difference in people who are older and decide to go into a monastery.

H.E Abhaya Rinpoche: I guess with many people who are older, they see their lives – in their lives they strive and work for worldly benefit.  You can of course trust and be good and do good things and be beneficial, but as we grow older, we realize that we are going to die some day.  We want something more – a better purpose, perhaps. With younger people, they’re still learning. Most Western people I know are in their 20s and 30s.  With Tibetans, they’re often monks from a young age.

As of January 2019, H.E. Abhaya Rinpoche was fully ordained by H.E. Luding Khenchen Rinpoche at the Holy Site of Bodh Gaya. 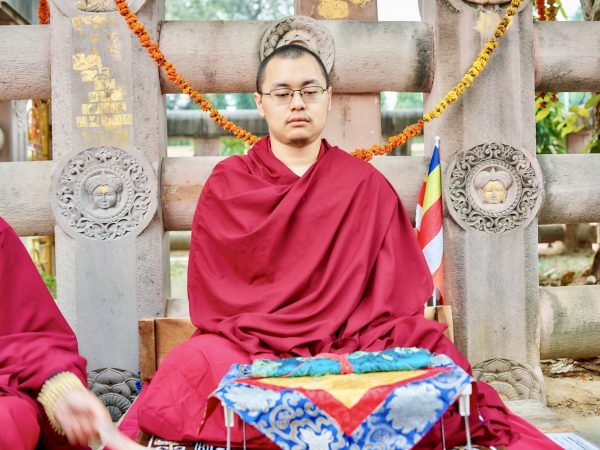