Good morning to all women, men, girls, and boys who are happily bringing their engaging mindfulness to this auspicious occasion.  On behalf of H.H. Jigdal Dagchen Dorje Chang and Sakya Monastery, I welcome you to our celebration of the 84th birthday of His Holiness the 14th Dalai Lama.

One day out of 365 days in a year, every year for more than 84 years, human beings, and especially Tibetans, on this planet have celebrated the birthday of His Holiness the 14th Dalai Lama.  A birthday celebration for His Holiness Dalai Lama is an opportunity for the human community to acknowledge with pure intention our loving connection and faithful respect for a man who lives his life in body, speech, and mind as a true bodhisattva.

His Holiness Dalai Lama’s power to elicit our heartfelt desire to be happy does not come from force of arms, financial wealth, political governance, performance abilities as an elite athlete or entertainer, and any other worldly attainment or position.  All of the worldly vehicles that propel other human beings to the peak of their power are not what create His Holiness Dalai Lama’s supreme power and popularity. 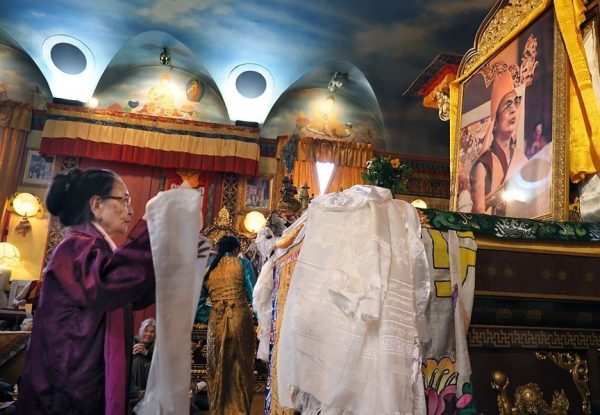 Rather, His Holiness Dalai Lama’s power rests entirely on his absolute faith over many lifetimes in the Buddha, Dharma, and Sangha and on his practice arising from his incomparable motivation to free all beings from the sufferings of samsara.  As a simple monk, he walks his talk without an ounce of doubt or hypocrisy.  He bears no animosity or grudge against any other sentient being, including the Chinese government and mosquitoes, which have been pestering him for more than 7 decades.

His Holiness Dalai Lama has both the unique wisdom of recognizing every sentient being as his mother, father, sister, and brother and the exquisite skillful means of conveying with profound certainty that your happiness is essential to his happiness.  His Holiness Dalai Lama possesses the radiant like quality of an unblemished mirror that reflects back to everyone in his presence their true nature of loving kindness and compassion.

Finally, His Holiness Dalai Lama reminds us over and over, that each of us has the innate capacity to attain the state of bliss that he radiates effortlessly. He embodies the majestic and magnanimous transformative power of the Buddhadharma as the supreme means to reach together total and complete enlightenment.  Thank you, Your Holiness Dalai Lama, you have been our beloved, treasured, and living embodiment of Chenrezi for 84 years.