On April 19-20, 2019, Sakya Monastery welcomed Venerable Khenpo Choying Dorjee, who visited Seattle from the Dzongsar Institute in India, to give a special three-part teaching on Nagarjuna’s Precious Garland. The Precious Garland of Advice for the King (Sanskrit: Rajaparikatha-ratnamala) was written by Nagarjuna and belongs in his collection of advice texts. The root text is composed of five chapters, each with 100 verses. This is the most complete Shastra (work of scripture) ever written by Nagarjuna himself. 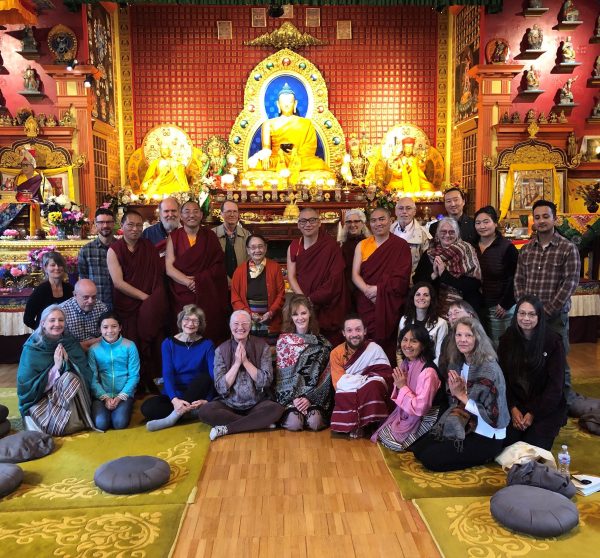 Khenpo Choying Dorjee is the Head Principle of Dzongsar Institute in India and appointed as teacher of H.E. Sakya Khöndung Avikrita Rinpoche. He received his Khenpo title in 2002 and received his Khenpo Degree, which is the equivalent to a PhD in Buddhism, in 2004. It was an honor and a privilege to have with us such a learned and accomplished teacher.

After reflecting on bodhicitta and reminding us that our sole motivation to practice the Dharma is only for the purpose of benefitting all sentient beings, Khenpo Choying said he would set out to answer five questions during the course of the teaching:
1. Who is the author?
2. For whom was it composed?
3. Which Path does it belong to?
4. What is the main subject matter?
5. What is the main purpose?

1. Who is the author?
Nagarjuna’s biography is extraordinary. According to Khenpo Choying there have been many great masters since the time of the Buddha but none of them compare to Nagarjuna. There are famous masters in the Paramitayana tradition and famous master in the Vajrayana tradition but Nagarjuna is the only master who is famous in both traditions. In the Nalanda tradition he was even considered to be a second Buddha. Why? It was not because he lived for 600 years or that he is the only person besides Shakyamuni Buddha with the 32 major and 80 minor marks of a Buddha. It was not because he performed miracles such as ending a 12-year famine or using alchemy to turn metal into gold or the fact that he built over a million temples. King Asoka also did this. The Buddha prophesied Nagarjuna would be the one to hold his teachings after being asked by Manjushri. But even this does not make him so important. Others have also been prophesied by the Buddha. What makes Nagarjuna a second Buddha is that he understood interdependent origination and he explained it. Nagarjuna composed what he understood with scripture and logic through three collections or baskets:
1. Collection of discourse/advice
2. Collection of hymns or praises
3. Collection of logic

Nagarjuna’s Precious Garland falls into the first category, the collection of discourse or advice.

2. For whom was the Precious Garland composed?
The verses were composed for Nagarjuna’s friend, the King but also for all of us.

3. Which category of teaching is it?
According to the type of homage made by the translator, the Precious Garland falls into the Sutrayana system of teachings.

4. What is it about?
The 500 verses address two matters: the highest state of rebirth and elevation to the highest good.

5. What is the purpose?
Nagarjuna wrote these verses out of compassion for the sake of sentient beings. He wrote it for us to attain enlightenment.

What is the highest state of rebirth? Rebirth in the three upper realms is the result of merit. Here, human rebirth is the goal because only with the precious human rebirth is there opportunity to receive dharma teachings. In the heaven realms there is less opportunity because there is less suffering. Beings need some suffering in order to be motivated to practice dharma. In order to attain a precious human rebirth, complete with leisure time and physical endowments, one must practice the 16 types of dharma for higher rebirth.

Khenpo Choying Dorje says that all of the Buddha’s teachings are about these two topics.

Khenpo Choying spent some time discussing the meaning of devotion because there are many misundertandings as a result of translating the word, cultural context and so forth.

Devotion, or faith is generally categorized into 3 types:
1. Faith resulting from admiration of the Three Jewels; one likes to listen to the dharma. One is pleased with what one hears and sees.
2. Aspiring faith: one aspires to be like the Buddha and the Arya Sangha.
3. The faith of conviction: one has confidence in the Three Jewels.

For complete devotion, one needs all three. When one has the qualities of joy, confidence and hope, this is the real quality of an Arya. It is important for us to examine whether our devotion is pure or not. One has to make clear one’s goal. The purpose for practicing dharma can’t be just for oneself or just for this life. How do we check if our devotion is pure? Is it devotion or attachment? Examples of wrong devotion is blind devotion, such as following the teachings because of one’s culture or because one’s parents believe in it. Or because of “energy” – it feels good. Blind devotion is related to worldly things.

The 6th verse addresses devotion. Devotion needs to be unshakable, even when disturbing emotions arise. If we give up the dharma because of fear; out of fear of an evil king, for example, our devotion is not strong enough. We have to remember to continually renew our vow of devotion. Gradually we will overcome negative emotions in this way.

No. 6. One who does not neglect the practices
Through desire, hatred, fear, or bewilderment
Is known as one of faith,
A superior vessel for definite goodness.

On the second day of the teaching, Khenpo Choying summarized each of the chapters.

Nagarjuna’s Precious Garland is very suitable for lay practitioners, for example it gives very detailed instructions on how to rule a country. It is good business advice for companies and governments.

The first chapter talks about Dharma for elevation. If the goal is not for the next life, then any practice is not really dharma. If we are attached to this life, we are not dharma practitioners. The ultimate goal of the Dharma teachings is to achieve liberation. However, first we need the precious human life so we have an opportunity to gain wisdom.

The 7th verse gives a definition of ‘wise one’.

No. 7. Having analyzed well
All deeds of body, speech, and mind,
Those who realize what benefit self and others
And always perform these are wise.

The 11th verse describes how to prepare for a higher state of rebirth by practicing the 16 Dharmas and abandoning the 10 non-virtues.

No. 11. Practice is not done by just
Mortifying the body,
For one has not forsaken injuring others
And is not helping others.

In order to attain the ‘highest good’ one needs to gain wisdom. Here wisdom means to understand the truth, i.e. what is the nature of phenomenon. The root of all samsara is self-clinging. Therefore, we need to abandon self-clinging. When we analyze, no self can be found. It is a baseless idea. Everything is dependent on causes and conditions. This is the meaning of emptiness.

Verse 27. Self-clinging becomes the cause of all disturbing emotions. As long as we believe that our 5 aggregates exist inherently, we will have self-clinging. If we cling to a self, then it means that we also cling to other. This gives rise to duality. The view of self and other gives rise to anger and other disturbing emotions which in turn lead to all karma. Karma is the cause of rebirth, aging, sickness and death.

Verse 28. From the perspective of knowing things as they truly are, there is never “I” or “mine”. If self-clinging is a valid cognition, then we can’t remove it. Because self-clinging is false, we have a chance for liberation. This makes Buddhism different from other religions.

No. 28. “The I exists, the mine exists.”
These are wrong as ultimates,
For the two are not [established] By a thorough consciousness of reality just as it is.

Verse 30 and 31. How is self-clinging false? Buddhist philosophy puts everything in 5 aggregates. What is I? Is it the body? No. Is it feeling? No. Is it mental factors? No. Is it formations? No. Is it consciousness? No.

No. 31. Just as it is said
That an image of one’s face is seen
Depending on a mirror
But does not really exist [as a face],

The “I” does not truly exist. When we analyze, “I” is not there. But when we do not analyze it is there. We might understand this concept intellectually but we have not habituated this wisdom. Understanding this concept is the beginning. Then we meditate. The literal translation of the Tibetan word “Gom” which means ‘to meditate’, is “familiarize”. Why do we meditate? To familiarize or habituate the concept of selflessness.

In order to have success in meditation we need certainty. Doubt is the biggest hindrance to meditation. There are several ways to gain certainty:
1. Analyzing
2. Having confidence in the Buddha
3. Receiving signs, such as getting goosebumps