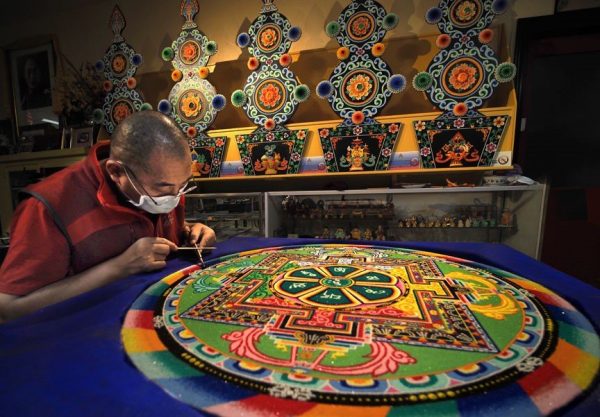 Between November 4 through November 10, 2019, Sakya Monastery of Tibetan Buddhism was very fortunate that our Resident Artist, Venerable Lama Migmar, single-handedly created a sand mandala of Avalokiteshvara (Chenrezig in Tibetan). The public were invited to view it each day as the creation progressed. Lama Migmar diligently, patiently, and expertly accomplished this task with great precision and detail, and with meditational and artistic acumen.

The first day was a mathematically precise process of laying out a grid in red chalk to guide the shape of the mandala. The lines were created by string, covered in chalk and pulled taut. White chalk was used over that to create an outline of the design. Then he started laying sand from the inside of the mandala outward using a traditional instrument, a kind of funnel with ridges, called a chak-pur. 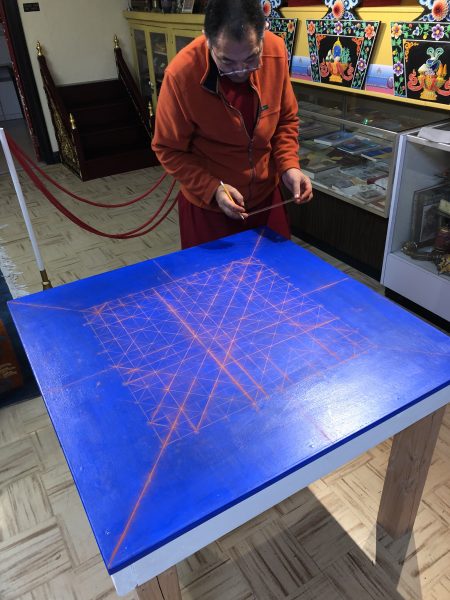 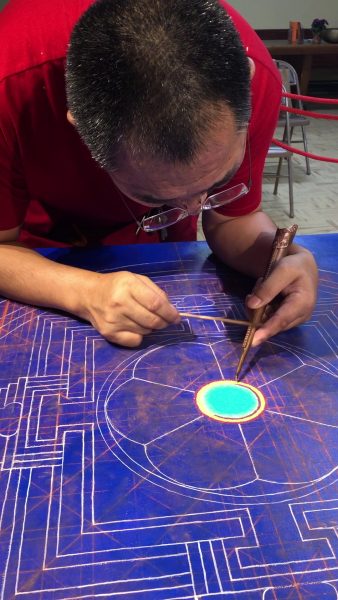 Each day he gave a brief explanation about mandalas in general and about this particular one that he was constructing. Some of the points Lama Migmar made included our perspective when viewing the mandala. Though it appears on a flat surface, it is actually a building, the home palace of the meditational deity (yidam in Tibetan). We are looking down as if from a satellite into the building. Some mandalas have three stories, some two, and this one we were viewing was of one story. 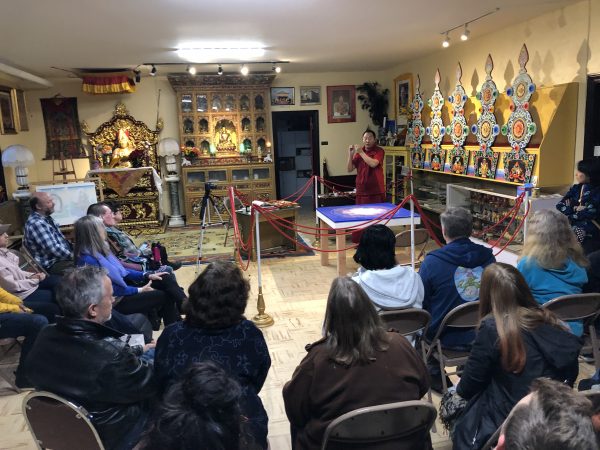 Every part of the mandala is symbolic. At the very center is the seed syllable of Chenrezi. This is where the deity resides, and where all the prayers during the mandala’s creation are taken in. Chenrezi is surrounded by offerings. The six petal shapes surrounding the center represent the six realms of existence, and Chenrezi’s blessings flow to all of them. In each petal is a syllable of the mantra om mani padme hum. 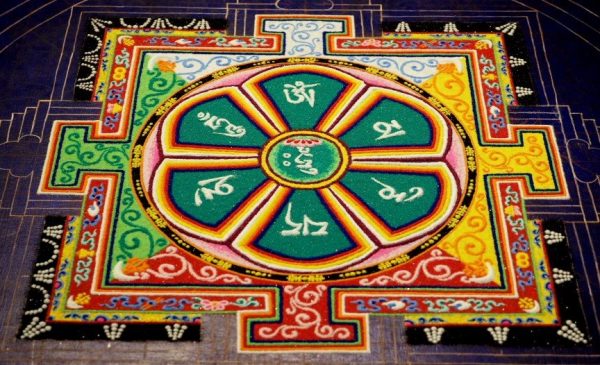 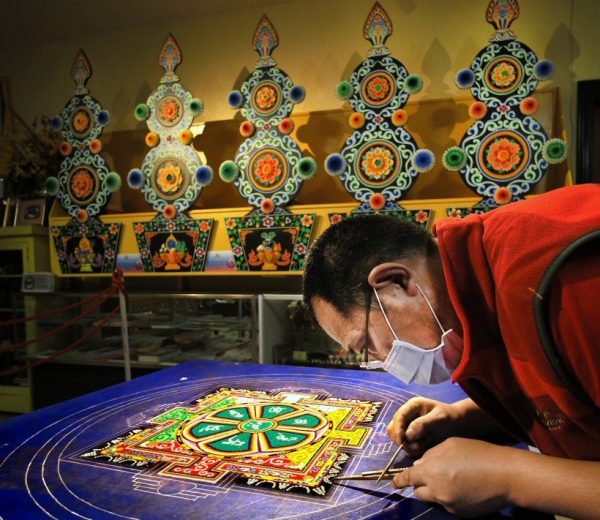 Lama Migmar pointed out to us the four entrances to the palace in four directions: white for East, yellow for South, red for West, and green for North. Surrounding the palace are the offerings of water for washing, water for drinking, flowers, incense, lamps, perfume, food, and music. In each corner is a half-vajra and a crescent moon for protection. A black and yellow ‘fence’ of vajras also surrounds and protects the deity and lotus petals in the center. He indicated the outermost rings of lotuses, vajras, and the fire of wisdom. 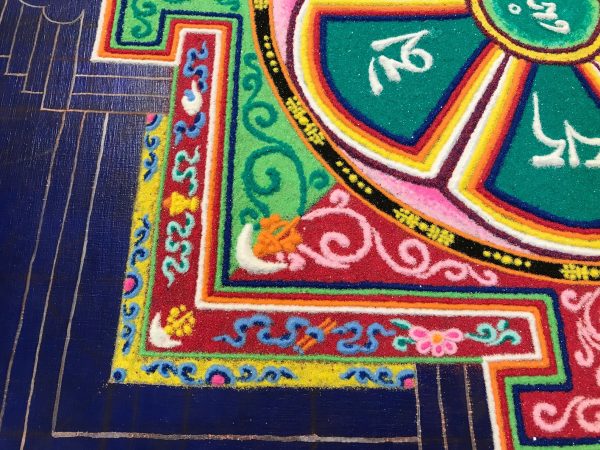 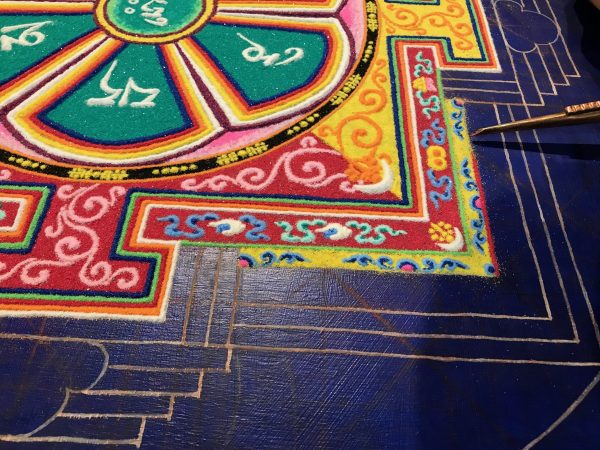 Lama Migmar emphasized the meditational purpose for the benefit of all beings in creating this mandala of colored sand powder which glistened and sparkled making a beautiful sight. 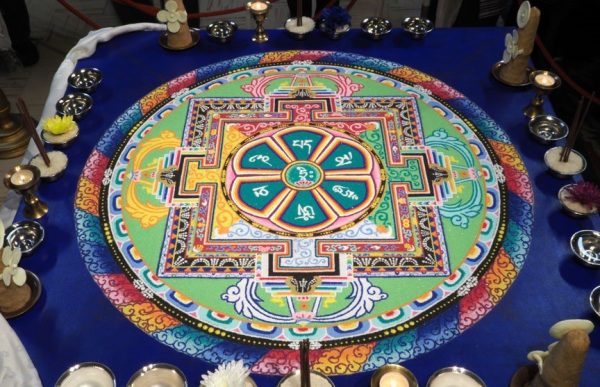 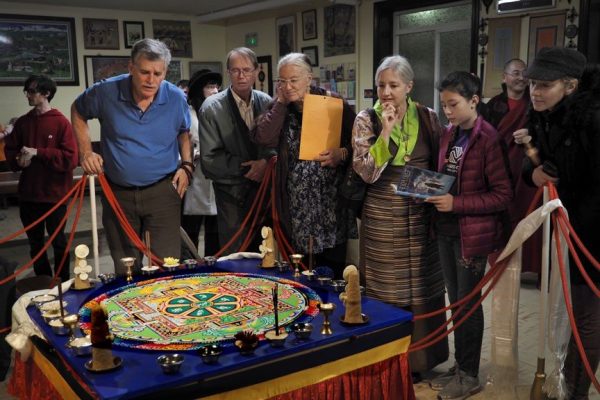 On Sunday afternoon, a ritual ceremony led by our resident lamas was held to deconstruct the sand mandala. Lama Migmar conducted Chenrezi prayers to bless the mandala before the deconstruction began. 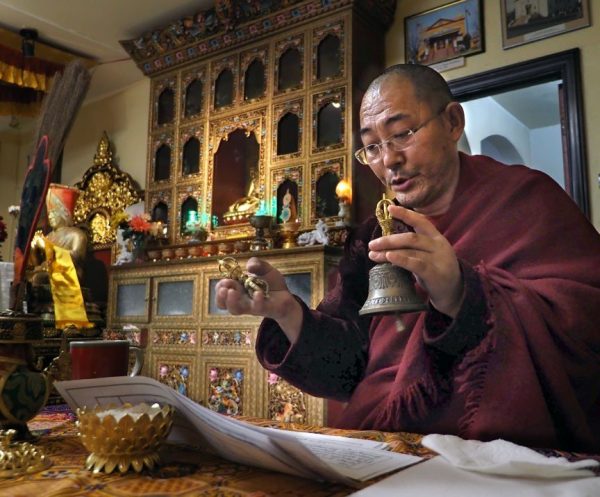 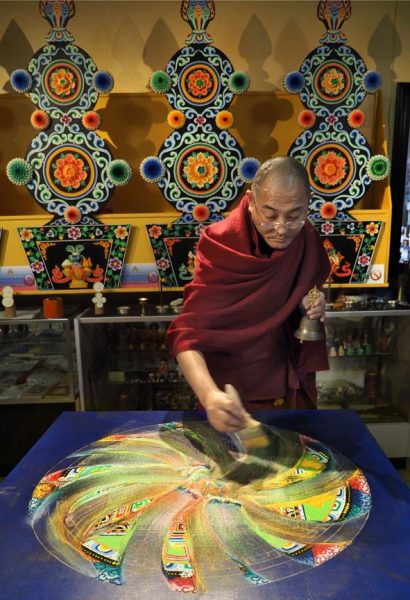 First the sand was all swept toward the middle, starting at the palace gates, in a ritual pattern. The lamas and students then traveled to Carkeek Park. Each person took home a small amount of the blessed sand, and the rest was dispersed into the ocean. Prayers of aspiration and dedication were recited to benefit all the creatures of the ocean and earth. The tradition of the dissolution of the sand mandala reminds us of the impermanence of all phenomena. 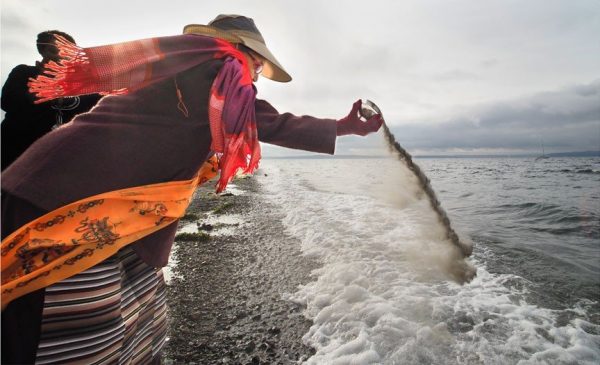