A Prayer for Pacifying the Fear of Disease

In this time of great fear and panic in China and the rest of the world due to the spread of the Coronavirus, I offer this prayer from the great 14th century mahasiddha Thangtong Gyalpo to avert further sufferings and to pacify your fears.

This prayer called “The prayer that Saved Sakya” as the name suggests, is a prayer composed by Thangtong Gyalpo to pacify the fear of disease in Sakya. Once when there was an incurable sickness spreading in the monastic and local community of Sakya and after every method of healing failed, Thangtong Gyalpo recited the refuge prayers, did several mani mantras and this particular prayer. It is said that the spread of the viral epidemic in Sakya ceased immediately upon the utterance of this prayer. So it became known as the vajra speech with cloud like blessings, the prayer that saved Sakya.

Please recite this prayer as many times as possible and at the very least three times a day. It is a simple prayer to avert the spread of the virus and also during times like this, you should remember the Bodhisattva of compassion, Avalokiteshvara and invoke his protection and blessings. Avalokiteshvara said in the Avatamsaka Sutra “I have caused my name to become known in the world so that beings may be freed from danger. I have blessed as many forms of myself as there are forms of beings, so that beings will think of me when necessary.” Guru Padmasambhava said “When someone is afflicted by disease or an evil influence, compared to any mundane ritual of healing or of repelling obstacles, the merit of the Six Syllables is much more effective for warding off obstacles or disease. Compared to any medical treatment or cure, the Six Syllables are the strongest remedy against sickness and evil”. So please recite the six syllable mantra “Om Mani Padme Hum” as many times as you can with great compassion for all sentient beings. At the end of your practice, dedicate all the merit you accumulate for the benefit of all sentient beings.

Thangtong Gyalpo whose name literally means “King of the Empty Plains”, was a great Mahasiddha who was also known as the Iron Bridge Builder as he built several iron suspension bridges which are still in existence today. A great yogi and a man of many talents, Thangtong Gyalpo lived to the ripe old age of 125 years. 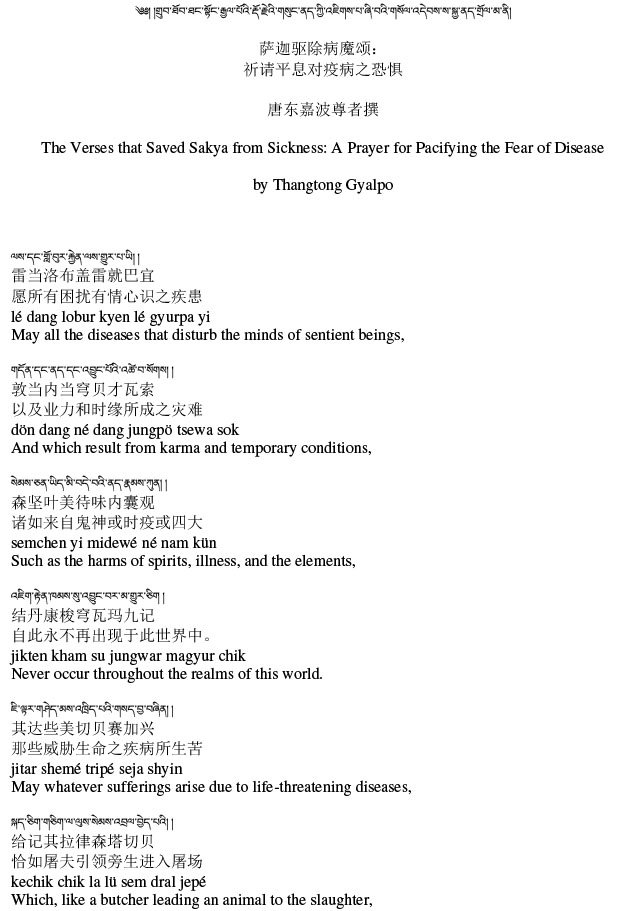