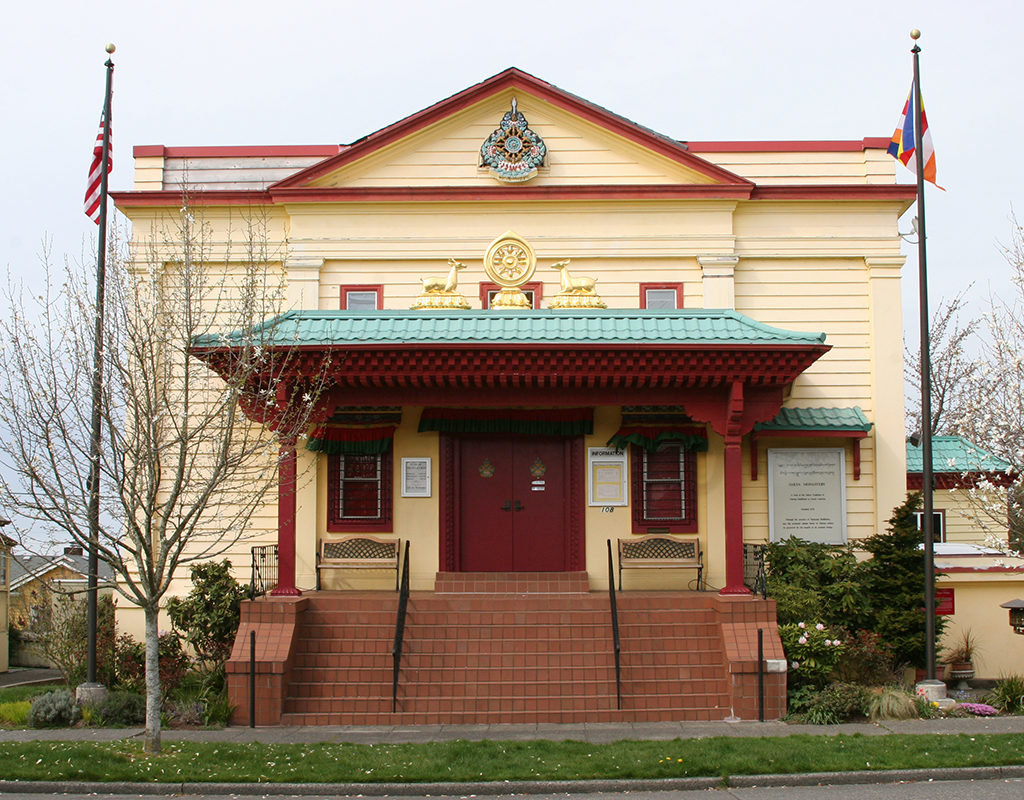 Sakya Monastery of Tibetan Buddhism is a place to learn from highly qualified Tibetan Lamas in a traditional setting. The Monastery occupies a beautifully renovated building which houses a pristine example of a Tibetan Buddhist shrine, one of only a few in North America. It is located in Seattle’s Greenwood neighborhood near the intersection of Greenwood Avenue North and North 85th Street. While called a Monastery, and monks do live there, it is primarily a lay community of practitioners, with various levels of experience in the Buddhist tradition. It was founded by His Holiness Jigdal Dagchen Sakya (1929-2016) (called “Rinpoche,” meaning “Precious One” in Tibetan), and His Eminence Dezhung Rinpoche. Dagchen Rinpoche was a head Lama of the Sakya School of Tibetan Buddhism, one of Tibetan Buddhism’s four main Schools. Currently, the Head Lamas of the Sakya Monastery are His Eminence Khöndung Avikrita Rinpoche, His Eminence Khöndung Abhaya Rinpoche (Associate Head Lama), His Eminence Khöndung Asanga Rinpoche (Associate Head Lama) and Her Eminence Dagmo Kusho Sakya (Acting Head Lama).

The term “Sakya” is derived from Rinpoche’s family name and spiritual lineage, and ultimately from the original Sakya Monastery in Sakya, Tibet, built in 1073. It received the name Sakya because it was constructed on a patch of earth (sa) that was pale (kya). The Monastery in Seattle is a seat of the Sakya School of Tibetan Buddhism in North America. It is also a non-sectarian religious center, and hosts visits and teachings from leading Lamas of all four Schools of Tibetan Buddhism. The Virupa Educational Institute (VEI) was founded by the Monastery and is its educational branch.

The purpose of the Monastery is to share and preserve Tibetan Buddhism and Tibetan culture. It does this through the promotion of Buddhist teachings and spiritual practices and by upholding Tibetan customs and traditions. Since the purpose of the Buddha’s teaching, as practiced in Tibet, is to develop loving-kindness and compassion, the main meditation practices at the Monastery focus on the cultivation of these qualities. Through VEI, Sakya Monastery offers a variety of educational classes to foster a better understanding of the teachings of the Buddha. 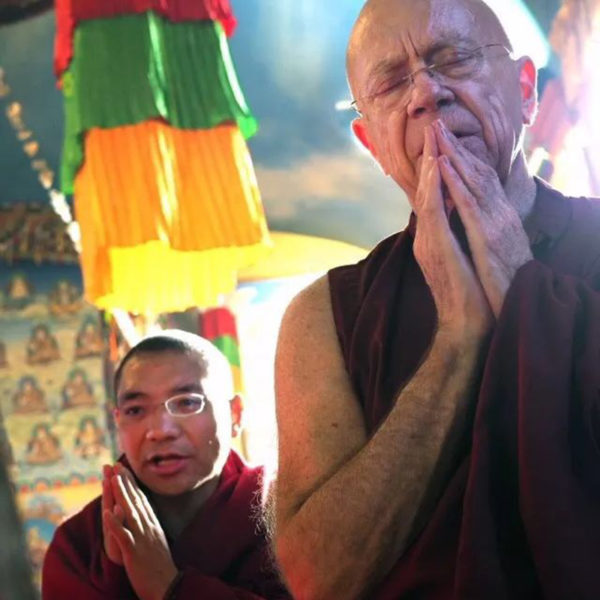 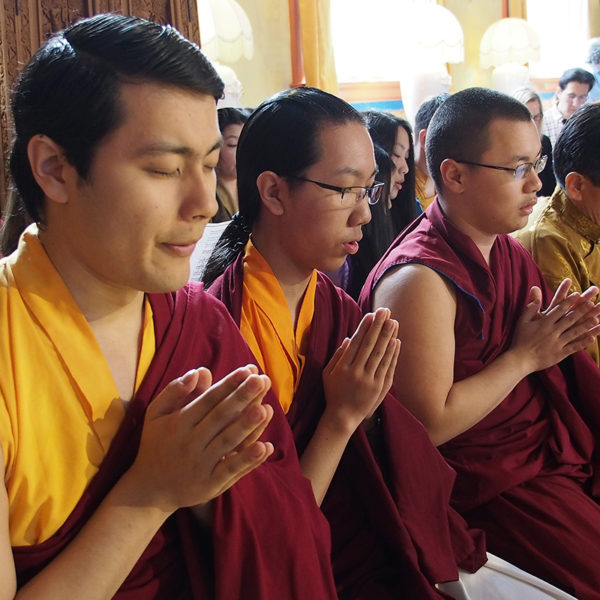 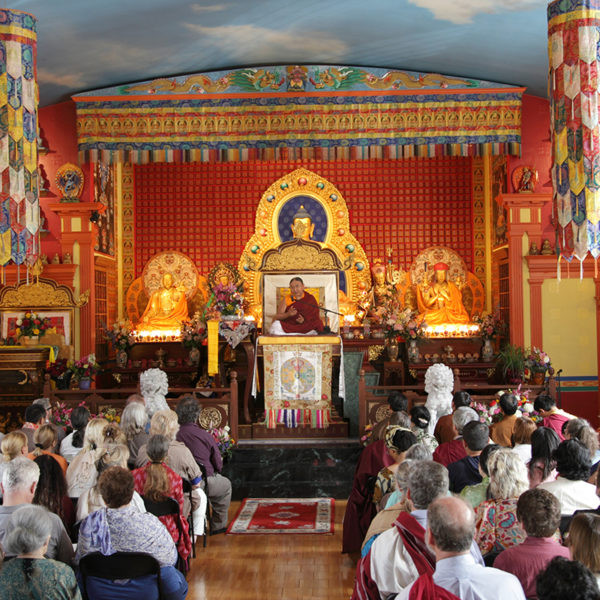 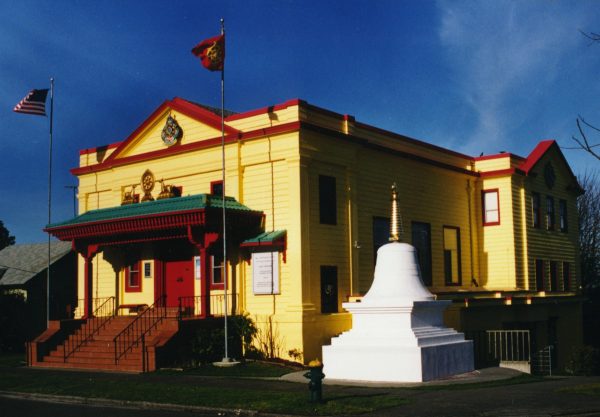 The Monastery’s building was initially erected in 1928 as the First Presbyterian Church. Over the years, different Christian denominations have owned the building. In 1984, a Baptist group sold it to Sakya Tegchen Choling center (Sakya Monastery’s predecessor). Since its founding in 1974, this center had successively outgrown accommodations in the Ravenna-Bryant, Capitol Hill, Wallingford, and University districts. When it moved to the Greenwood area, the center reorganized under H.H. Jigdal Dagchen Sakya Rinpoche and adopted the name Sakya Monastery of Tibetan Buddhism.

Buying the large structure in Greenwood was a big step for the small center. A remarkable event helped catalyze the purchase of the building. While the search was being conducted for the center’s new home Rinpoche had a dream in which he saw the destined building. Upon waking, he had architectural plans drawn for the building as revealed to him in his vision. Amazingly, the Baptist Church was an exact match for these vision-based plans and the decision was made to acquire the building, located at 108 NW 83rd Street, Seattle, Washington.

Since the purchase, many years of hard work and renovation by dedicated volunteers have brought the building to its present form and grace. At various stages of the renovation, the highest-ranking Lamas in Tibetan Buddhism, including His Holiness the Dalai Lama, have consecrated the Monastery’s building and its contents, imbuing them with the enlightened spirit of the Buddha and transforming the building into a North American home for the Buddha’s teaching. In addition, the Monastery contains many holy objects from India, Tibet, and Nepal.

Following the first year of renovation, the downstairs cultural hall was used as an interim location for the Monastery’s religious services. For the next twelve years, the main worship hall (the shrine room) underwent remodeling. Numerous Buddhist works of art

were donated by the Monastery’s members, friends, as well as by professional artists and Dagchen Rinpoche’s family. Extensive murals were painted on site. During this period, Bernardo Bertolucci shot scenes for the film Little Buddha at the Monastery. This venture helped pay for the new wood parquet floor in the shrine room. Outside the building, in keeping with the style of traditional Tibetan monasteries, a portico was added over the front entrance. By 1997, the remodeling was sufficiently finished so that the main shrine room could be used for meditations.

In 1998, the outside of the Monastery’s building was painted in traditional Tibetan colors and a memorial stupa was erected to Dezhung Rinpoche (the Lama who co-founded the original Sakya Tegchen Choling center). The bell-shaped stupa is located in front of the Monastery and symbolizes the Buddha’s enlightened mind. In 2001, a library addition capable of holding at least 5,000 volumes was finished and opened. 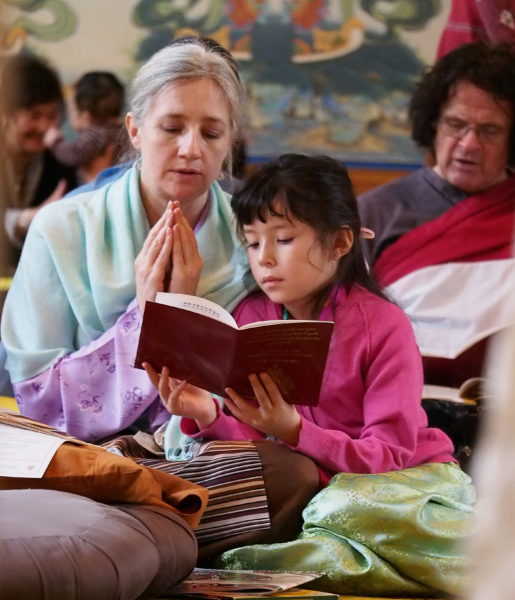 In Tibetan Buddhism, a religious community traditionally needs both a Monastery and a retreat center. A Monastery maintains and preserves the teaching of the Buddha through teaching, training, and practice. It houses monks who are trained in the intellectual, moral and ritual teachings of the Buddha and is a focal point for religious activities of the lay community. As well, with the rapid changes taking place in Tibet, the Monastery is also a place where Tibetans endeavor to preserve their unique Tibetan identity and culture.

The bustle of activity at a Monastery means that it is not always conducive to developing profound meditative experiences. For that, an isolated retreat center is necessary. In 2000, a Sakya Monastery student made a house and 72 acres of forest and ponds on Whidbey Island available for use as a place for spiritual retreats. Thus, with teaching facilities in Seattle and a meditation center on Whidbey Island, Sakya Monastery provides a complete array of traditional methods of Tibetan religious training for the lay community as well as monks and nuns.

Sakya Monastery offers a variety of activities for its members and friends. Foremost are the public meditations: Chenrezi meditations for developing loving-kindness and compassion are held on Sunday morning at 10 am and Thursday evenings at 7:30 pm. This is the main communal practice of Sakya Monastery. Calm Abiding meditations, which are useful for the development of concentration and mental stability, are held on Friday nights at 7:00 pm.

Numerous other ceremonies and meditations are held at the Monastery:

Additionally, the Monastery offers a variety of other programs and resources: There Dharma programs for both Children and Teens available every Sunday at 10am during Chenrezi. The Monastery library, available to members and visiting scholars, houses 2,500 books on Buddhism, Tibet, and comparative religion, as well as audiotapes of teachings in Tibetan by noted Lamas. The Virupa Educational Institute administers and organizes numerous classes, talks, book groups, discussions, and video showings held at the Monastery. These programs are open to the public and are widely attended.

Following Tibetan tradition, its Head Lama, H.E. Khöndung Avikrita Rinpoche, leads the Monastery. He consults regularly with an Advisory Board. Ten of the Board’s members are elected by the members of the Monastery; the others are the Head Lama, the Tibetan Cultural Advisor, the Executive Director, and members of the Sakya family and other appointed coordinators.